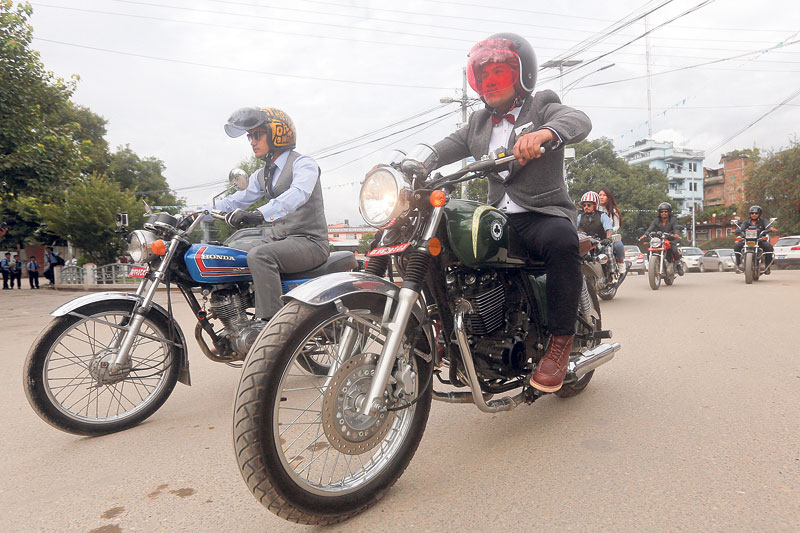 KATHMANDU, Sept 27: More than 100 bikers, clad in suits, rallied around the streets of Kathmandu on their vintage motorcycles on Sunday, September 25. The riders were taking part in an international bike ride called ‘The Distinguished Gentleman’s Ride (DGR)’ that aimed at raising awareness about prostate cancer and suicide prevention in men.

Hosted by Kathmandu based motorcycle workshop and merchandise store, RS MOTO, the Kathmandu chapter of the event saw the riders completing a 25km long journey from Gahana Pokhari to Patan Durbar Square in Lalitpur. This was the first ever DGR event organized in Nepal, according to Rajiv Sayami, owner of RS MOTO.

“This bike ride is a symbolic gesture to raise and collect funds for a very important cause and at the same time, it is also an attempt from our side to connect and unite the bikers’ communities based in Nepal,” Sayami told Republica.

DGR was initiated by an Australian motorcycle enthusiast Mark Hawwa in 2012. Hawwa was influenced by a photograph that featured American actor Jon Hamm in his Mad Men TV show character Don Draper posing while seated on a vintage bike.

Hawwa thought of a gentlemen themed bike ride where bikers would suit up and ride their vintage motorcycles. It started with a motto ‘Riding Dapper for a cause’ to portray motorcycle riders as gentlemen and to raise funds to support health research on prostate cancer. In its last three editions, DGR has already raised about $ 3.8M.

According to DGR’s official website, this year more than 56,000 riders from 90 countries raised $3.3M.