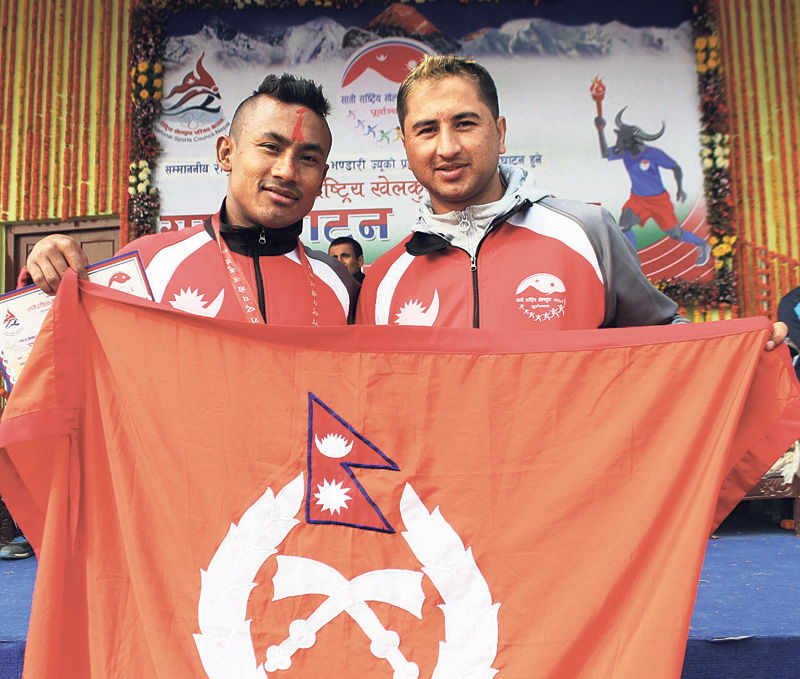 BIRATNAGAR, Dec 27: Karateka Mukunda Maharjan made a hat-trick of gold medals in the National Games on Monday as his team Armed Police Force (APF) maintained its domination in the martial arts games.

Mukunda, who competed in men’s 67 kg, had earlier claimed gold medals in the fifth edition of the Games in Kathmandu in 2008 and the sixth edition in Far Western Region in 2012.  On Sunday, Parshu Ram Bastola of the same departmental team had achieved such rare feat in karate kata.

On Monday, Mukunda edged past Md Seikh Alam of Far Western Region 5-3 in tatame. Earlier, Mukunda had overcome Bishal Paudel of Central Region in the semifinal. Bhupendra Khadka of Police was the other player to have his share in bronze along with Bishal.

“It is a big achievement to make hat-trick of golds at the National Games in a country like Nepal which does not hold it regularly,” Mukunda said. “I think I am prized for my hard work since a long time. I thank my colleagues at APF, coach and the department for the feat. It is not easy to remain on top for eight long years in sports.”

In the women’s 50 kg final, Anu overcame Misli Shrestha of Army 5-3 for gold. Muskan Shah of Mid Western Region, who lost to Anu, and Jeena Subba of Eastern Region settled for bronze medals.

Sudurpaschim Province Assembly meeting postponed to 4PM today
38 minutes ago
One arrested with Rs 900,000 of undisclosed source
40 minutes ago