Kalikot fire victims left to shiver in the cold 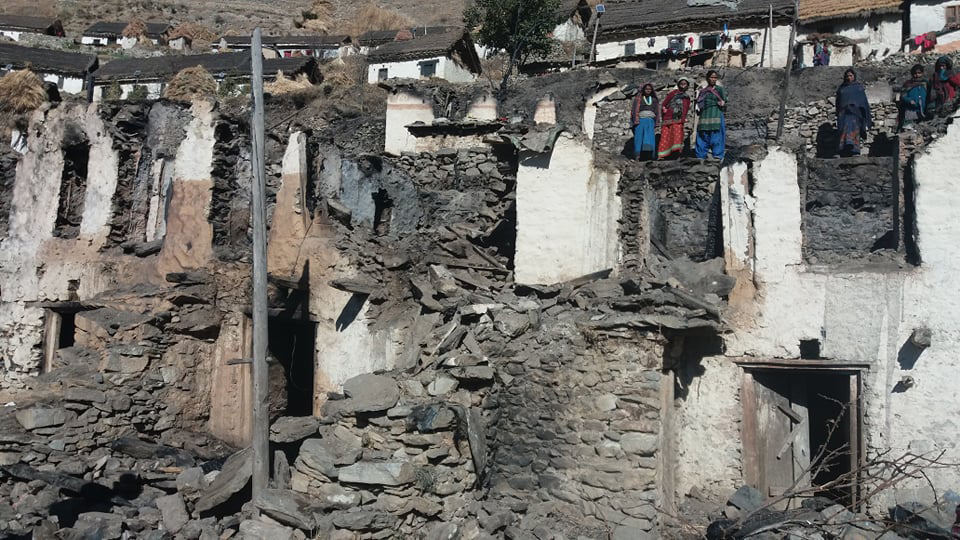 KALIKOT, Dec 27: Lalmani Upadhyay of Khada village in Kalikot district recently suffered a massive loss which he had not even imagined in the wildest of his dreams. He was fast asleep when a massive fire broke out in his settlement at Palata Rural Municipality-1 of the district on Sunday night.

The heat of fire engulfing his house and the distant cries of neighbors woke him up. Upadhyay, 65, escaped with his wife and two sons just in time before the burning house collapsed.

“We had no time even to grab a single piece of cloth. My family survived due to sheer luck,” he said. “It was an unforgettable night. We spent the cold night under the open sky with no proper clothes to keep us warm.”

On that fateful night, the fire gutted at least 87 houses and destroyed properties worth millions of rupees. Majority of the victims do not have food and shelter. They are fully dependent on the government and have requested more supplies of immediate relief.

Despite the scale of massive fire, there were fortunately no human causalities, thanks to timely alert from Dhandevi Neupane, a local.

Neupane had gotten up at around 2:30 am to go to the toilet. She saw the fire starting from the house of Nabin Neupane and alerted everyone. Though the fire could not be taken under control, her timely action is said to have saved countless lives.

The fire displaced 540 villagers. Currently, they are taking shelter in an open ground of a nearby school. They have built a common kitchen near the school for preparing food. The settlement is fully dependent on relief materials for their survival. Relief collection works are still ongoing.

BAGLUNG, Jan 8: Three children were killed in a fire at Tara Village of Tarakhola Rural Municipality in the district... Read More...