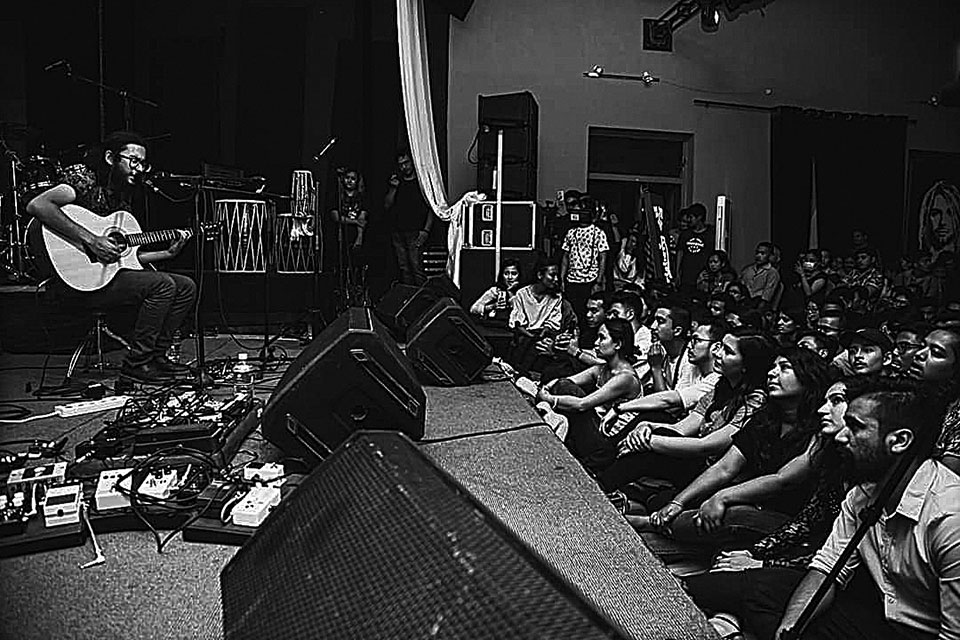 Ishan Raj Onta doesn’t believe in doing just one thing. Life’s too short and special for that. As a musician and full time lawyer, Ishan divides his hours between music and his work as a corporate lawyer, and does so with much finesse. Hard as it may seem, he is thriving and enjoying being at the heart of what he loves and what he is passionate about. “I’m at a great position in life and while dealing with two professions is a challenge, it’s a challenge I’m very much willing to take up,” he says.

Growing up Ishan admits to being quite the introvert. He had a hard time understanding people and they, in turn, couldn’t seem to understand him either. Never the academic star, most people didn’t expect him to pass his SLC examinations. And when he did, they were astonished to say the least. When it was time to choose what he wanted to study for his Bachelor’s, he actually had nothing he wished to pursue. It was because he wanted was to escape mathematics that he ended up studying law. “So you can’t say I became a lawyer because it had been a childhood dream of mine,” says Ishan.

All the while, music was with him, keeping him company. At primary levels in school he played the violin for a few years and as he grew older he swapped his violin for the guitar. He learnt that he preferred the guitar to the violin and has stuck with it ever since. Then he heard American rapper Eminem’s Lose Myself and he began seeing music in a different light. “That was when I realized music isn’t just about pleasant sounds and that it could mean so much more,” he adds.

That was when he started writing songs. The words came to him awkwardly and he thought back then that he couldn’t see the larger picture. When he started Ishan didn’t believe that he wrote well but now when he reads his old songs he feels that he did a pretty good job. Today, Ishan writes and composes regularly and as the lead vocalist of the band The Elements that comprises of two other members (guitarist and drummer), he can be seen performing around town and releasing music frequently.

Alongside his music, Ishan was doing very well in college. He scored well and got involved in mood courts (for which he chairs today) and became a much more accomplished student than he was back during his school days. After college he joined a law firm that allowed flexible hours. “I didn’t want a nine to five job and I wanted to pursue music as well so I particularly chose a firm that let me practice law and music at the same time,” he elaborates.

Ishan’s band The Elements has been together since 2017 but the three members actually started playing together years ago. Raunak Singh Adhikari (guitarist) and Dipesh Gurung (drummer) are multitaskers too, just like Ishan. Raunak is a law graduate and Dipesh plays the drums in both Strings and KTM Killer besides The Elements. Ishan says that since all the members are heavily involved in more things than one, things can get a little overwhelming at times. Sometimes, there’s only so much you can do, he says.

Their music, Ishan describes, is spontaneous and is more intrinsic in its dealings with theme. It’s earnest, one might say. The Elements recently released their single Last Saturday and they have new music coming by the end of August this year. They are also planning a Nepal tour starting September.

While Ishan is doing well musically, he is also thriving in his work as a lawyer. He shares that both music and his work go hand in hand and one isn’t removed from the other. He deals with his clients a few hours a day and then he goes home and works on his music. Ishan prefers the night hours and he loves working when it’s just him and it’s all quiet and peaceful. He meets up with the band members two to three times a week for practice sessions and there are always Saturdays too. The band can be seen performing during music nights but because they insist on performing their originals rather than the customary covers, their appearances are rather infrequent.

Ishan believes he is living the dream life. Although working and pursuing his passions together can be challenging at times, it’s what fulfills him. “I could perhaps do much better if I only chose to pursue music or to practice law. But I don’t want to choose one over the other and really I don’t have to either,” he explains.

Ishan hesitates to call himself a musician because he thinks he has limited knowledge about music theory. Pretty much all he knows is self-taught so he believes he has a lot more to learn. It’s needed especially in today’s music scene, he says. As a lawyer too, he says, he has loads to learn and experience but he is more than willing to do whatever it takes to eventually be counted among the best.