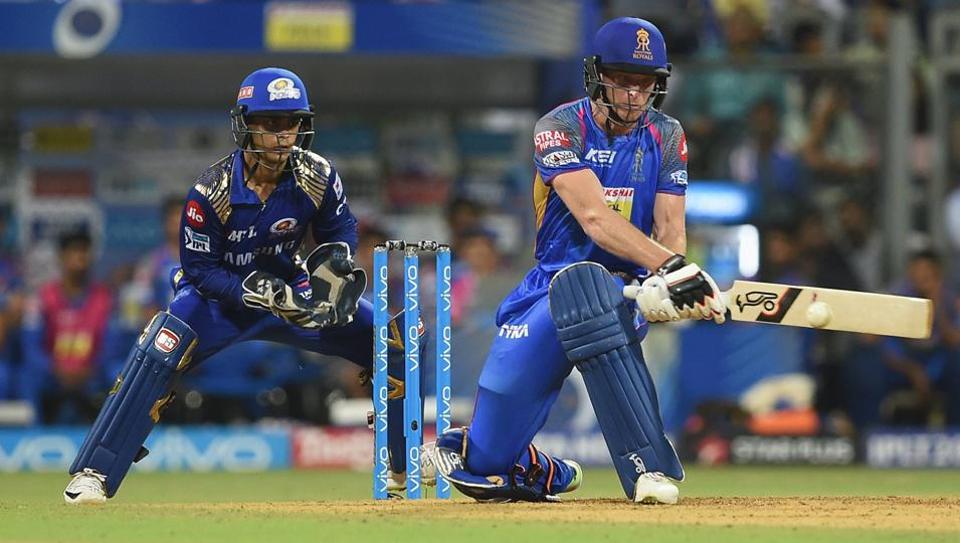 Jos Buttler in action for Rajasthan Royals during their Indian Premier League (IPL) 2018 match against Mumbai Indians on Sunday.(PTI)

May 14: It was a match Mumbai Indians couldn’t afford to lose. Yet, with three dropped catches, an opening partnership of 87 runs and a wicket off the first over while defending 168, the defending champions tumbled against Rajasthan Royals as the visitors walked away with a seven-wicket victory to climb to fifth on the table.

For Mumbai, the campaign is all but over and will depend on how the other teams fare even if they win their last two games. It wasn’t a poor score but it was the brilliance of Jos Buttler, who slammed an unbeaten 53-ball 94 to steer his side home.

The Englishman had scored an unbeaten 95 against Chennai Super Kings in the last game and again fell short of the triple-figure mark. If Rajasthan qualify for the playoffs, these knocks would count for more than just two missed tons. D’Arcy Short fell early again but that hardly put any pressure on Buttler, who smashed the ball all across the park.

With Ajinkya Rahane (31-ball 38) playing the anchor at the other end, Buttler pushed on. As the required rate dipped, he upped the pace, notching up boundaries en route his fourth consecutive half-century. He studded his knock with nine boundaries and five towering sixes.

Mumbai Indians were off to a flying start as Evin Lewis (42-ball 60) and Suryakumar Yadav (31-ball 38) started strongly. They made use of the dropped chances and toyed with the Rajasthan bowling attack, picking up 51 runs in the powerplay. However, once both departed on either side of skipper Rohit Sharma’s first-ball duck, the run rate dipped to 7.5 before a Hardik Pandya blitz helped Mumbai post a decent total.

It was all about intelligent bowling as Jofra Archer, Jaydev Unadkat and Ben Stokes used their variations well, including the odd bouncers that frustrated the Mumbai middle order. It was an exceptional knock from Lewis though, the West Indian opener bringing up his second half century of the IPL with a gigantic six.