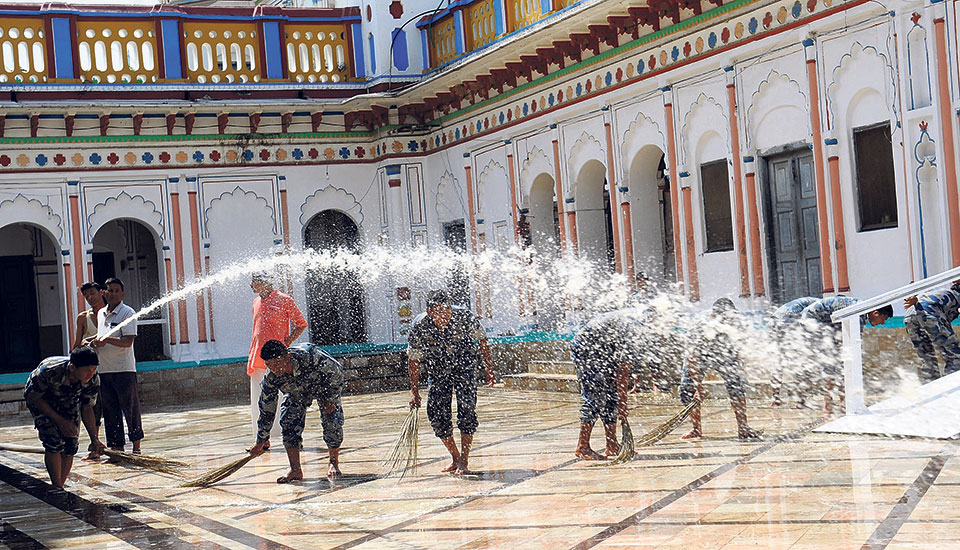 JANAKPUR, May 11: Locals in the holy city of Janakpur await the state visit of Indian Prime Minister Narendra Modi on Friday as the provincial and local governments in coordination with the federal government have given the whole place  a total facelift to  welcome the visiting dignitaries.

While walls along the major roads have been painted afresh with unique Mithila art motifs, those putting up  stages and decorating the Barhabigha grounds, where Prime Minister Modi is being extended a civic reception, have been working  round the clock  as a  windstorm in the wee hours Wednesday demolished what they had already done.

The national flags of Nepal and India have been placed at the major thoroughfares of Janakpur City and a number of decorative arches with huge posters carrying messages of welcome for both Modi and his Nepali counterpart K P Sharma Oli  erected at the major intersections.

Over 1,000 security personnel including  from the Nepal Army, Nepal Police and the Armed Police Force were mobilized on Thursday to clean up the roads from Janakpur Airport to Janaki Temple via Murali Chowk and the road leading to nearby Barhabigha grounds, according to Chief Minister of Province 2 LalBabu Raut. Additionally, students of various schools in the city have volunteered for the cleanup.

The interior of the city and the premises of Janaki Temple were cleaned up with water fetched by fire engines. Security arrangements have been beefed up, with police and army personnel already taking over the security of the temple and Barhabigha grounds. Only those with special passes are allowed to enter these areas.

Officials said over 3,500  personnel have been mobilized for security in Janakpur. While  army personnel with armored vehicles have been stationed for patrolling, Indian security personnel, who have arrived in Janakpur, are keeping special vigil in the areas to be visited by  Modi on Friday.
Chief Minister Raut said all necessary preparations to welcome the Indian prime minister and his Nepali counterpart Oli had been completed. “Although the weather has been hostile, we have left no stone unturned to welcome the visiting guests,” he said. Raut said the local, provincial  and federal governments and various social organizations and local people have been jointly preparing to welcome the visiting dignitaries.

Locals believe that Prime Minister Modi’s visit to Janakpur will  boost  religious tourism as tens of thousands of Hindu pilgrims are likely to come to Janaki Temple due to the publicity. They  also expect that  Modi may show a special gesture toward the overall development of Province 2  and Janakpur in particular.

Significant visit to mend bilateral relations
The third visit of Narendra Modi to Nepal after assuming office as prime minister of India in 2014 holds significance mainly for two reasons.

Firstly, this is the first time an incumbent prime minister of India is starting a Nepal visit from a city other than the capital Kathmandu.

Many people are watching this visit with curiosity to see what statements or announcement Modi will make to mend  bilateral relations that reached their lowest point after the unofficial Indian economic embargo in 2015.

Second, Modi’s visit  is taking place less than one and half months of the visit of his Nepali counterpart Oli to India. It has become a matter of interest for many in Nepal as to how Prime Minister Oli, who was so critical of the Modi government over its attitude toward Nepal in the aftermath of the promulgation of the new constitution, grew positive toward it.

Even ordinary people are watching the visit with curiosity as to what message Modi is bringing to win the hearts and minds of the Nepalis as he prepares to address the people of Province 2 on Friday.

Most Nepali people had developed anti-India feelings after facing the  acute shortage of fuel and other daily essentials owing to the economic embargo. As preparations are underway to extend a civic reception to  Modi in Nepal, a section of political leaders and the public have been expressing dissatisfaction against the government over such preparations.

Modi’s Janakpur Itinerary
According to Indian Consul General B C Pradhan stationed at Birgunj, Prime Minister Modi is scheduled to land in Janakpur via Patna at about 10:15 am Friday. Defense Minister Ishwar Pokharel will receive Modi at  Janakpur Airport.

After a brief welcome and introductions session at the airport, Modi and his team will be escorted to Janaki Temple, where Prime Minister Oli will welcome him. Accompanied by the head and deputy priests, Modi will then offer special prayers at Janaki Temple and make a brief statement announcing the launch of the Ramayan Pilgrim Circuit from the temple premises.

The two prime ministers are scheduled to jointly flag off the Janakpur-Ayodhaya Bus Service after the announcement of the Ramayan Circuit that seeks to connect all religious sites related to Lord Ram and Goddess Sita in Nepal and India.

While Prime Minister Oli will fly back to Kathmandu after the flagging off ceremony, Modi will  be escorted to Barhabigha grounds-- some 500 meters  from Janaki Temple-- for the civic reception  to be offered on behalf of Janakpur Sub-metropolitan City. The provincial government, which expects to bring over 100,000 people from the eight districts in the province, has made arrangements for a cultural program till the Indian prime minister arrives at the venue.

According to officials at the provincial and local governments in Janakpur, Modi will be offered a letter of felicitations in four different languages including Maithili, Nepali, Hindi and English on behalf of the Janakpur Sub-metropolitan City.