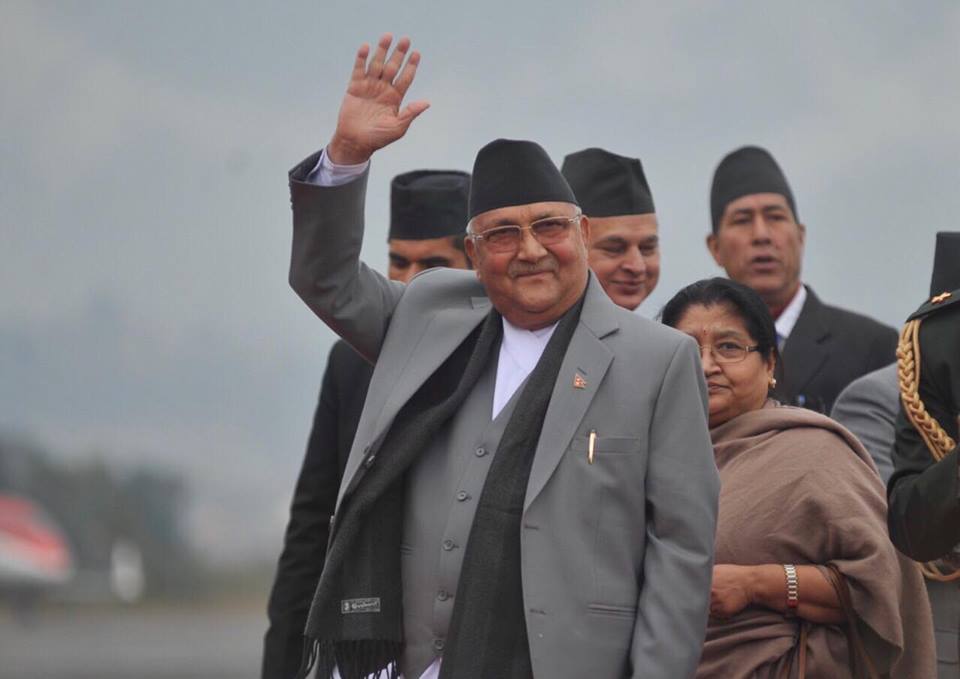 KATHMANDU, Jan 26: Prime Minister KP Sharma Oli has returned home after participating in the World Economic Forum, Davos. Prime Minister Oli urged the international community to invest in Nepal while delivering speech during the session of the ‘Strategic Outlook on South Asia’ on January 22.

Regarded as the club of billionaires, Prime Minister Oli clarified that Nepal has kept the economic development at high priority. Oli calls for investment wherever he goes.

He requested for investment when he went on official visits to China and India after becoming the prime minister of Nepal. However, the initiative taken by the prime minister for inviting foreign investment has not gained momentum yet. According to details provided by the Department of Industry, commitment for foreign direct investment (FDI) has gone done by 27 percent in the last six months.

Foreigners had expressed commitment to invest Rs 141.2 billion in FDI in the first six months of the last fiscal year. As of today of the current fiscal year, this FDI has decreased to Rs 102.3 billion from the Rs 141.2 billion. Former Vice Chairman of the National Planning Commission (NPC), Dipendra Bahadur Chhetri has suggested that the international community should be taken into confidence to increase the FDI.

International Community had promised Rs 15.2 billion in FDI in the fiscal year 073/074 BS. The investment increased to Rs 55.64 billion in the 074/075 fiscal year BS. Former Vice Chairman of National Planning Commission Dr Govinda Pokharel has said that in the last fiscal year, the investment had increased in hopes of getting favorable environment due to stability.

“This government could not create environment conducive for foreign investment. It has not worked on policies so as to attract investment,” he said.

The government is preparing to organize investment conference in the capital toward the end of March.  According to Investment Board, Nepal a total of 500 investors has shown interest in it. Uttambhakta Wagle, spokesperson of the IBN says, “Talks are underway on areas for investment.”

He further said the selection process for the investors has already begun. Over 400 people have been invited to the investment conference to be held on May 29 and 30.

The investments will be sought for projects including Nijgadh International Airport, construction of cable cars for holy places located at highlands, establishment of agricultural farm, monorail in Kathmandu, electronic railway and BRT along the Ring Road.

The government had organized an investment conference in 2073 BS. However, the investment had been limited to the commitment itself that year. Then Industry Minister Nabindra Raj Joshi said the commitments could not be materialized since the successive governments did not show interest in bringing in investments.

“We could not welcome even those who were willing to invest,” he said.

The investment conference had taken place following the promulgation of the new Constitution in 2073 BS. In the conference organized with a view to attracting investment, various people had expressed commitment of Rs 1.1 trillion in investment.

Chinese investors alone had pledged to invest Rs 830 billion. Prem Sagar Paudel, who was coordinating with the Chinese investors, echoed with the Joshi’s view that the government failed to create conducive environment.

He says, “Chinese are ready to invest as much as the investment is required.” Chinese investors had asked Joshi how much money had been required in the conference.

The conference had been able to send messages that Nepal adopted policy for liberal economy. In 2046 BS, Nepal had received Rs 5.19 billion in foreign investment. There were only seven big industries being run at the foreign investment.

Now-a-days there are 294 big industries. Investors have expressed commitment of Rs 195 billion in FDI for these industries. Similarly, 4,380 small and medium-size industries have been registered at the Department of Industry for which Rs 83.39 billion has been invested so far, according to the industry’s record.

In the first six months of the current fiscal year, the number of industries has increased compared to the period around this time last year. Against the interest of the government, the foreign investment is increasing in the small industries. A total of 195 industries including 180 small industries have been registered.

Foreign investors have committed Rs 3.34 billion in the first six months of the current fiscal year for small industries, which means Rs 18,500,000 for an industry in average. China had invested in agriculture and restaurants in Nepal following the Indian blockade in 2072 BS. India is following suit. It is investing in cargo, language training centers, etc.

In the first six months of the current fiscal year, the foreign investment-run industries have provided employment to as many as 6,756 people.

Norwegian hydro company Statkraft had withdrawn its investment from Tamakoshi III hyrdo project, citing the lack of market, leaving the project in the middle. However, the study made by Transparency International Nepal has stated technical and administrative obstructions that led to the withdrawal of Statkraft’s investment from the 650-megawatt hydro project.

The government in the past had annulled the agreements signed with Australian and Chinese companies, too. These incidents are also responsible for discouraging foreign investment. Similarly, lack of infrastructure, government’s lackadaisical attitude and lengthy process are other factors that discourage foreign investment.

Two arrested on charge of rape
19 minutes ago