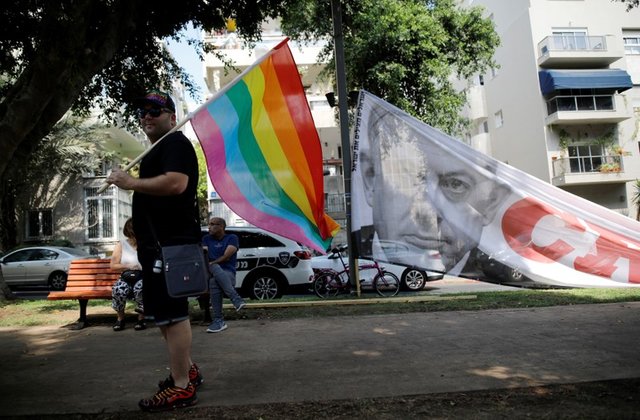 Single women and women unable to become pregnant for medical reasons were given the right to apply for state support for surrogacy under the amendment passed by the Israeli parliament and supported by Netanyahu.

But Netanyahu backed off an additional amendment, drafted by a member of his Likud party, that would have granted the same right to single fathers and, by extension, gay couples.

The distinction drawn by the premier, whose coalition includes conservative Jewish parties, touched a nerve in Israel, which does not conduct same-sex marriages but recognizes such unions if they are performed abroad.

“Netanyahu’s a homophobe, we’ve come out to the street,” chanted protesters opposite his Jerusalem home. “There is no equality, there’s discrimination, we will topple the government.”

Netanyahu said that, had he support the fathers’ amendment, the entire bill would have been blocked in parliament, denying single women surrogacy rights.

He had pledged to back a future bill focusing on fathers’ surrogacy rights.

During the protests, demonstrators blocked the Ayalon freeway, a main route through Tel Aviv. A rally is planned in Tel Aviv’s central Rabin Square later in the day.

The protests have drawn expressions of support from the country’s main Histadrut trade federation and several dozen Israeli companies, some of which said employees would be granted time off to participate in the strike.

Robbers loot jewelry and Rs 1.2 million in cash from IME at Taplejung
57 minutes ago