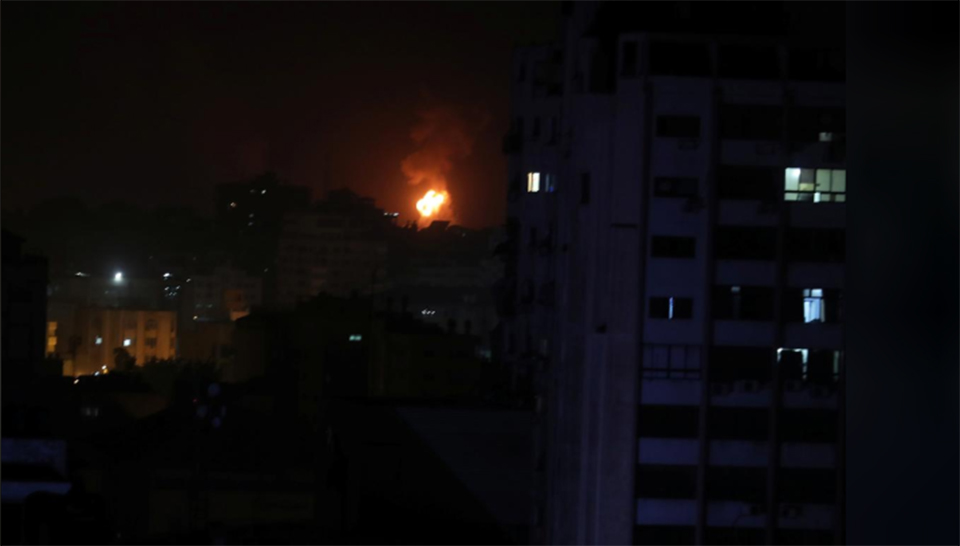 Smoke and flame are seen during an Israeli air strike in Gaza March 15, 2019. REUTERS/Mohammed Salem

GAZA, March: Israeli military aircraft bombed Hamas facilities in the Gaza Strip on Friday, hours after two rockets were launched from the Palestinian enclave at Tel Aviv in the first such attack since a 2014 war.

There was no immediate word of casualties in the air strikes that hit six buildings used by the dominant Islamist group’s security forces, and which had been evacuated as a precaution.

The Israeli military said it was targeting “terror sites” in Gaza. In a possible sign of further escalation, it said rocket sirens were sounded in Israeli communities near the Gaza border.

On Thursday night, the sirens howled farther north, in Tel Aviv, Israel’s commercial capital, set off by what the military said were two incoming, longer-range rockets from Gaza.

That salvo caused no casualties or damage, missing built-up areas. But it rattled Israeli nerves ahead of an April 9 election in which Prime Minister Benjamin Netanyahu is seeking a fifth term on the strength of his national security credentials.

Explosions were heard in Tel Aviv and witnesses said Iron Dome interceptor missiles were fired skyward and detonated - although the military said no rockets were shot down.

It was the first such attack on the city since the 2014 Gaza war between Hamas and Israel. There have been several smaller rounds of fighting since, reined in by Egyptian and U.N. mediations.

In that interview, Manelis said Israel did not yet know who had carried out the rocket launches. But another Israeli military spokesman laid the blame with Hamas on Friday.

Hamas denied involvement, saying the launches took place as its leaders met Egyptian delegates about efforts to secure a long-term ceasefire with Israel.

Israeli analysts speculated that Palestinian militants opposed to any deal between Hamas and Israel were behind the launchings.

The flare-up of Thursday and Friday drew a U.S. statement of support for Israel. “Hamas and other terror orgs in Gaza continue to fail their people day after day & drag Gaza further & further down by constantly choosing violence,” tweeted Jason Greenblatt, the White House’s Middle East envoy. “This method will never work. Ever!”

Naftali Bennett, a member of Netanyahu’s security Cabinet who is vying against him for rightist votes in the looming election, demanded the assassination of Hamas chiefs. “The time has come to defeat Hamas once and for all,” he said on Thursday.

Netanyahu also faced pressure from the center-left opposition, whose leading candidate, former General Benny Gantz, said: “Only aggressive, harsh action will restore the deterrence that has eroded” under the prime minister’s watch.

Tensions have been high for the past year along the Israel-Gaza frontier since Palestinians began violent protests near Israel’s border fence that have often drawn a lethal response from the Israeli military.

JERUSALEM, May 5:  An early morning rocket from the Gaza Strip killed an Israeli man Sunday outside a home in... Read More...

All those who desire peace in the Middle East should be deeply worried about the consequences of Netanyahu’s policies ... Read More...

MCC will be endorsed only after consensus among major political parties: FM Dr Khadka
13 hours ago

54 injured in bus accident
13 hours ago