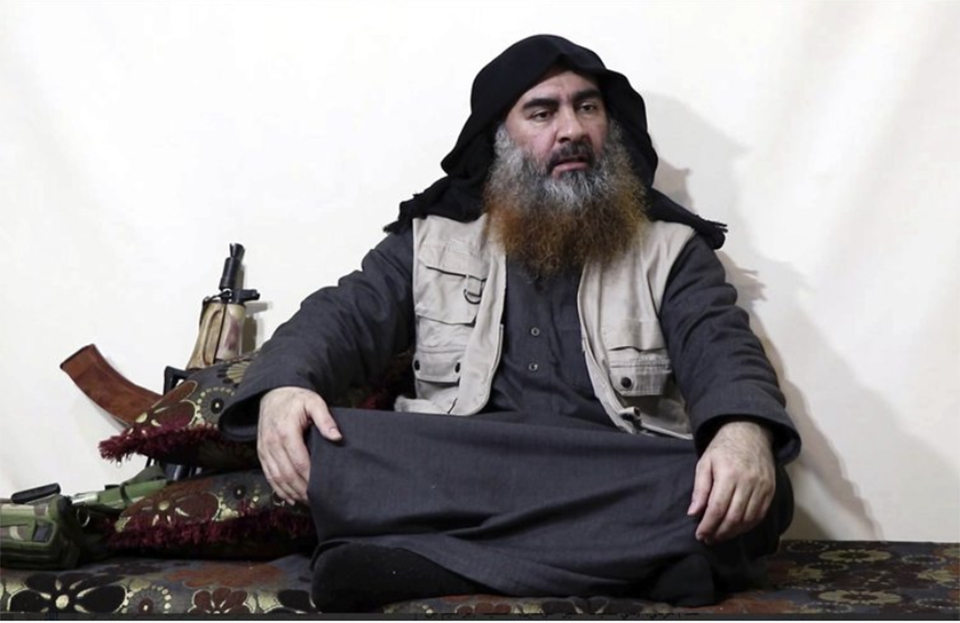 BEIRUT, April 30: The shadowy leader of the Islamic State group claimed to appear for the first time in five years in a video released by the extremist group’s propaganda arm on Monday, acknowledging defeat in the group’s last stronghold in Syria but vowing a “long battle” ahead.

The man said to be Abu Bakr al-Baghdadi in the video also claimed the Easter Day bombings in Sri Lanka which killed over 250 people were “part of the revenge” that awaits the West.

Despite numerous claims about his death in the past few years, al-Baghdadi’s whereabouts remain a mystery. Many of his top aides have been killed, mostly by U.S.-led coalition airstrikes. He is among the few senior IS commanders still at large after two years of steady battlefield losses that saw the self-styled “caliphate” shrink from an area the size of Britain to a tiny speck in the Euphrates River valley.

The video released by a media outlet run by the extremists, Al-Furqan, shows al-Baghdadi with a bushy grey and red beard, wearing a black robe with a beige vest and seated on the floor with what appears to be an AK-74 rifle propped up next to him. He is speaking with three men seated opposite him whose faces were covered and blotted out.

It is his first video appearance since he delivered a sermon at the al-Nuri mosque in the Iraqi city of Mosul in 2014. In that video, he appeared as a black-robed figure with a trimmed black beard to deliver a sermon from the pulpit of the mosque in which he urged Muslims around the world to swear allegiance to the caliphate and obey him as its leader.

Since then, he has only released audio messages through the group’s media outlets.

In the video released Monday, al-Baghdadi acknowledged that IS lost the war in the eastern Syrian village of Baghouz, the group’s last sliver of territory, which was captured last month by the U.S.-backed Kurdish-led Syrian Democratic Forces. The fall of Baghouz marked the militants’ territorial defeat and the end of their self-declared Islamic caliphate over parts of Syria and Iraq.

Al-Baghdadi said that the battle for Baghouz demonstrated the “barbarism and brutality” of the West and the “courage, steadfastness and resilience of the nation of Islam.”

“This steadfastness shocked the hearts of the Crusaders in what increased their rage,” he added.

Referring to the setbacks in battle, he said the “brothers” of the many fallen fighters “will avenge that, as they will not forget as long as they have blood in their veins, and there will be a battle after this one.”

Al-Baghdadi called specifically on his followers to intensify attacks on France.

He made repeated references to current events, including Benjamin Netanyahu winning the elections in Israel and the fall of longtime dictators Abdelaziz Bouteflika and Omar al-Bashir in Algeria and Sudan.

Most significantly, he praised the recent attacks in Sri Lanka which he said have “pleased the hearts of Muslims,” and said it is “part of the revenge that awaits the Crusaders and their followers.”

The group has claimed responsibility for the suicide attacks on churches and hotels in Sri Lanka, and investigators are looking into the extent of the extremist group’s involvement with the local radicalized Muslims who carried out the suicide bombings.

It is unclear when or where the video was filmed. Al-Baghdadi appeared to be in good health, although he spoke slowly and sometimes haltingly in the video.

With a $25 million U.S. bounty on his head, al-Baghdadi is the world’s most wanted man, responsible for steering his chillingly violent organization into mass slaughter of opponents and directing and inspiring terror attacks across continents and in the heart of Europe.

The video appeared to be aimed at boosting the morale. He bragged his group carried out 92 attacks in eight countries to avenge the loss of territory in Syria, citing Sri Lanka, Libya and Saudi Arabia, without offering evidence for his claim.

Although largely seen as a symbolic figurehead of the global terror network, al-Baghdadi’s capture would be a coveted prize for the various players across both Syria and Iraq.

But so far, he has eluded the Americans, Russians, Syrians, Iraqis and Kurds.

“Our battle today is a war of attrition to harm the enemy, and they should know that jihad will continue until doomsday,” al-Baghdadi said.