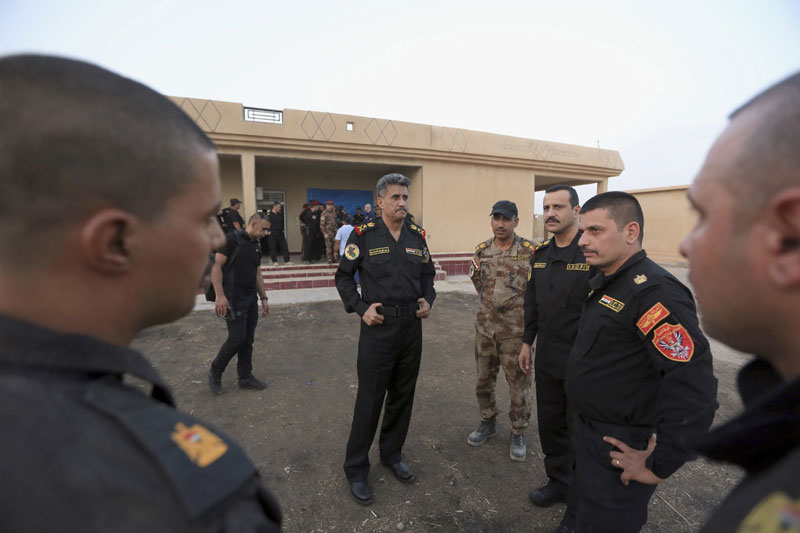 IRBIL, Iraq, Oct 21: The Latest on the developments in Iraq where Iraqi forces and their allies launched a major offensive this week to retake Mosul, the country's second-largest city from the Islamic State group (all times local):

Iraqi police say three Islamic State militants have stormed a power plant north of the city of Kirkuk, killing 11 workers, including two Iranians, before blowing themselves up.

Maj. Ahmed Kader Ali says the suicide bombers entered the facility early on Friday, took 10 workers hostage, and asked to be taken to the Iranians who worked there. One of the workers took them to the Iranians before escaping. The militants then killed the Iranians and the other workers, and detonated their explosive vests when police arrived.

The attack took place in the town of Dibis, to the north of Kirkuk city, where another militant assault was underway.

Kirkuk is some 170 kilometers (100 miles) from the Islamic State-held city of Mosul, where Iraqi forces have been waging a wide-scale offensive since Monday.

An Iraqi Kurdish TV channel says all the Islamic State militants who took part in an assault in the northern city of Kirkuk have been killed except for two who are holed up in a damaged building.

Rudaw TV says all the fighters who stormed a police compound early on Friday have been killed. It says the two remaining militants are battling Kurdish forces in a newly built hotel that was damaged in the fighting.

There was no immediate word on casualties among civilians or Kurdish forces.

The militants launched a pre-dawn assault on the city, which is around 170 kilometers (100 miles) from the IS-held city of Mosul, where Iraqi forces have launched a wide-scale offensive.

The Islamic State group says its fighters have stormed a government compound in the northern Iraqi city of Kirkuk.

The claim was carried by the IS-run Aamaq news agency early on Friday, and could not immediately be verified.

Live footage from the Kurdish Rudaw TV shows smoke rising from the city. The station quoted however Kirkuk Governor Najmadin Karim as saying that militants have not seized any government buildings.

Kirkuk is around 170 kilometers (100 miles) from the IS-held city of Mosul. Iraq launched a massive operation to retake Mosul, the country's second largest city, earlier this week.

The witnesses spoke on condition of anonymity because of security concerns.

Witnesses in the Iraqi city of Kirkuk say armed militants have attacked a local police compound and that fighting is underway.

They say multiple explosions have rocked the city so far in Friday's assault and that gunfire could be heard ringing through the city.

There were no immediate reports of casualties.

The attack comes as the Iraqi government and Kurdish forces are making a major push to drive Islamic State militants from Iraq's second-largest city of Mosul. The witnesses spoke on condition of anonymity as they are concerned for their safety.

Kirkuk is an oil rich city some 290 kilometers (180 miles) north of Baghdad that is claimed by both Iraq's central government and the country's Kurdish region.

LUCKNOW, India, Nov 2: The death toll from an explosion at a thermal power plant in northern India has climbed to... Read More...

Originating from Nepal's jungles, “sausage vine” plant is famous in the UK, yet remains unknown in Nepal

The sausage vine plant, a huge hit among gardeners in the United Kingdom (U.K.), originates from the jungles of Nepal,... Read More...

NCHL reduces service charge of Connect IPS use
20 hours ago

Tiwari is new DG of Department of Industry
1 hour ago

NMA to provide relief to 3,000 tourism workers
1 hour ago