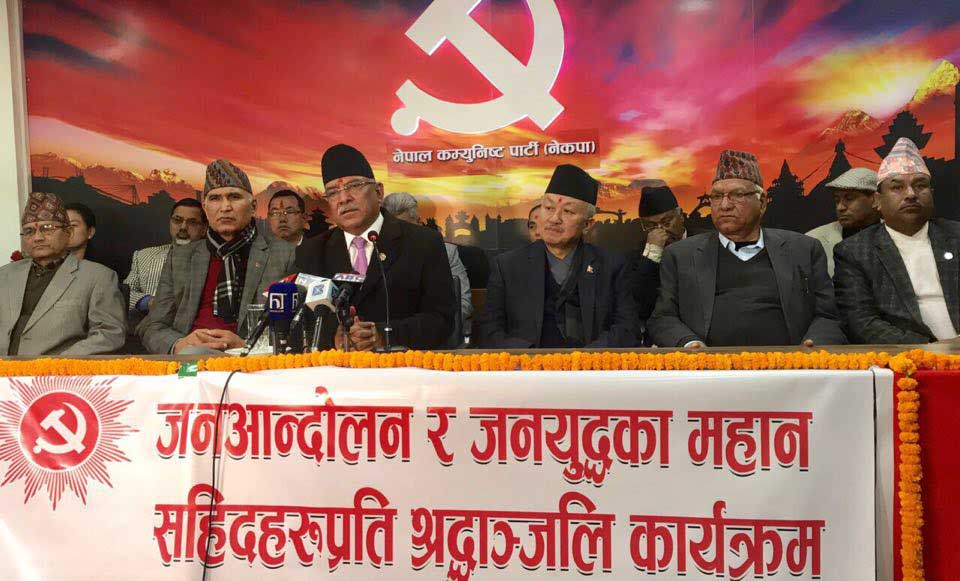 KATHMANDU, Feb 13: Co-chairman of the ruling Nepal Communist Party, Pushpa Kamal Dahal, has claimed that the "international reactionary forces" are hatching conspiracies behind the curtain to disturb the unification between the two communist forces, on Wednesday.

Dahal made the remarks at a function organized to commemorate the "24th People's War Day" at the party headquarters in the capital.

His statement comes at a time when the two chairmen are at odds over several issues including the Venezuelan political crisis and the party's unification at the local level.

"I request all the citizens and those who have faith on communism to stand in the journey of prosperity and development of our country," Dahal said amid the presence of senior NCP leaders Bishnu Poudel, Subhas Nembang and among others.

He urged the political parties to come together and pay solidarity for the cause of the nation. "The international community was surprised to learn the unification of the communist forces. In fact, this unification has provided an opportunity for us to stand committed for the development of the country." He was of the view that various political movements in the nation have inspired "us to move together in the journey of prosperity."

Dahal said that the country deserves to walk on the path of socialism. "I would like to appeal the sovereign citizens to contribute in our movement to realize the goals of socialism," he added.

Dahal further said that there is possibility of forging a water tight alliance between the political parties which share similar ideology. "What I believe that even Nepali Congress should come forward and support us in the journey of development and prosperity of the nation. It's high time for us to come together in order realize the goals of the People's War."

KATHMANDU, May 6: General Secretary of the ruling Nepal Communist Party Bishnu Paudel has said that he is ready to... Read More...

The way Balen has come forward is positive: Dahal
43 minutes ago