Instead of punishment, contractors get deadline extension for sluggish work 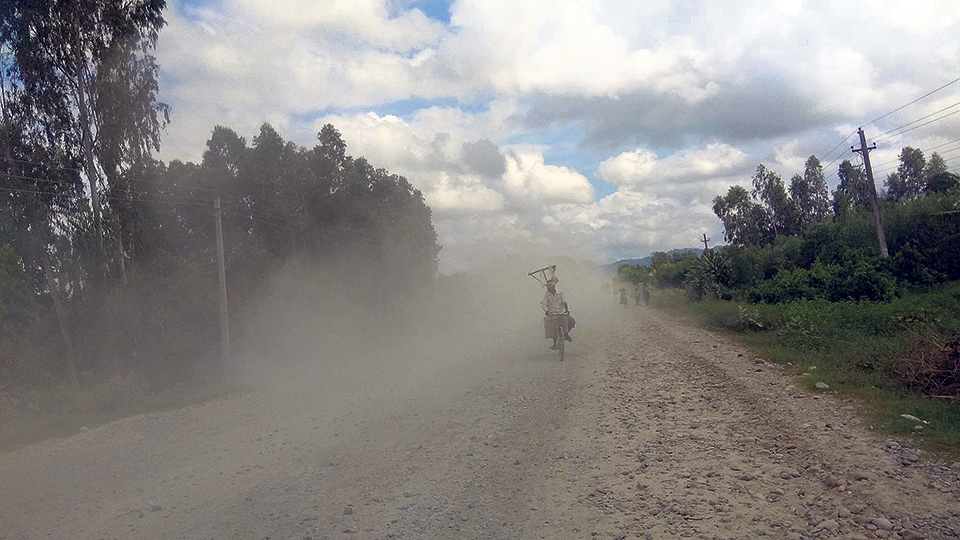 A cyclist and schoolchildren pass through a cloud of dust on the Nawalpur-Malangawa road section. | Photo: Tanka Chettri/Republica

SARLAHI, Sep 1: Instead of recommending legal action against the contractor for not completing the blacktopping work within the given deadline, the project office of Nawalpur-Malangawa road is preparing to extend the deadline.

This road section, which is the only route to connect East-West Highway with the district headquarters, has been in a dilapidated state for the last 10 years. The deadline for constructing culverts and canals in various parts of the road section will expire on September 1.  The contract was signed in 2016 but no section of the road has been blacktopped yet. With only 17 days remaining for the deadline to expire, the Postal Highway Project Office (PHPO), Janakpur is planning to extend the deadline by three months.

Santosh Karna, chief of PHPO, said that the deadline would be extended by three months if the work is not completed within the current deadline. "We don't have much time left. So, we have urged the contractor to speed up the work making sure that it is completed by December 1," said Karna. He claimed that the blacktopping would begin from September 1.

The contract for the blacktopping of this 25 kilometers and 594 meters long road section was signed two years ago for Rs 510 million. Himdung and Thokar/Hira and Namita JV accepted the tender for Nawalpur-Gair road section while Raman-Ashraya JV took the responsibility of the Gair-Malangwa road section. During an interaction with locals and various stakeholders a year ago, Nandalal Shrestha, the contractor of Nawalpur-Gair road section had assured to start the blacktopping work by April 13. However, nothing has been done yet.

Locals have repeatedly urged the authority concerned to begin the blacktopping work but in vain. On March 27, 2013, Indian Ambassador Jayanta Prasad laid the foundation stone of the project. An Indian construction company Bhiswa Constructions was awarded the tender for the road by the Indian government. But after completing only 5% work in two years, the company left the project. Later, two construction companies were handed over the responsibility to forward the work but still the work could not catch pace.  Passengers and pedestrians travelling on this route are forced to deal with great difficulties in this road section of the East-West Highway.