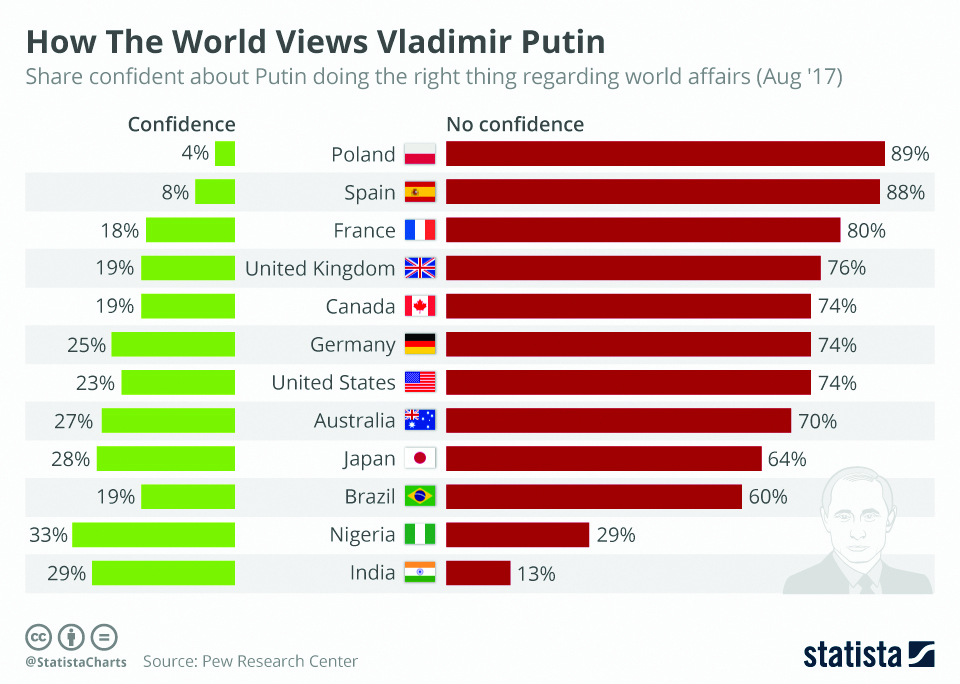 Earlier this week, British Prime Minister Theresa May announced in the House of Commons that Russia was “highly likely” to have been involved in the attempted murder of a former Russian spy and his daughter. The incident left Sergei Skripal, 66, and his daughter Yulia, 33, critically ill in hospital. The UK has now announced that it will expel 23 Russian diplomats after Russia failed to explain how a military-grade nerve agent was used in the attack in Salisbury. Even though the Kremlin has vehemently denied any involvement, insiders have said that all signs point to Moscow and if that’s true, it raises some troubling questions ahead of the country’s presidential election on Sunday. Some observers have suggested that rogue elements of the Russian government could be responsible for the attack while others are pointing their fingers firmly towards Vladimir Putin.

Even though there is no evidence that Putin gave the order to carry out a high-profile killing in public, the decision to use nerve agents that could be linked to Russia carries considerable risk. Some have claimed that Putin might have arranged the attack to engineer a confrontation with the west in order to improve turnout at the polls. If the UK goes a step beyond expelling diplomats and imposes sanctions, Russia could find itself more isolated and that has proven deeply unpopular with the country’s electorate. Putin is expected to win Sunday’s election easily and even if Russian media portrays the events in Salisbury as some kind of western conspiracy to rally voters, the president’s image is still likely to worsen internationally.

The most recent polling into how Putin is viewed abroad was conducted in August 2017 by the Pew Research Center. Even before the events in Salisbury, Putin was very unpopular across the world. In Poland where the relationship with Russia has never been easy, 89 percent of Pew’s respondents said they have no confidence in Putin doing the right thing regarding world affairs. In France, the share was also high at 80 percent. In the United Kingdom and the United Stated, 76 and 74 percent of people have no faith in the Russian president doing the right thing on the world stage.

In a new twist, EC trashes demand of NCP rival factions to recognize them as official NCP
19 hours ago

Govt under pressure to transfer funds from development projects to non-budgetary headings: Finance Ministry
19 hours ago

KMC permits all schools to reopen physical classes
16 hours ago

Hearing on HoR dissolution to continue tomorrow
8 hours ago

Oli, Nembang and Kharel might have a different version of constitution: Senior advocate Thapa
10 hours ago

We’ve brought in wave of development in the country: PM Oli
12 hours ago