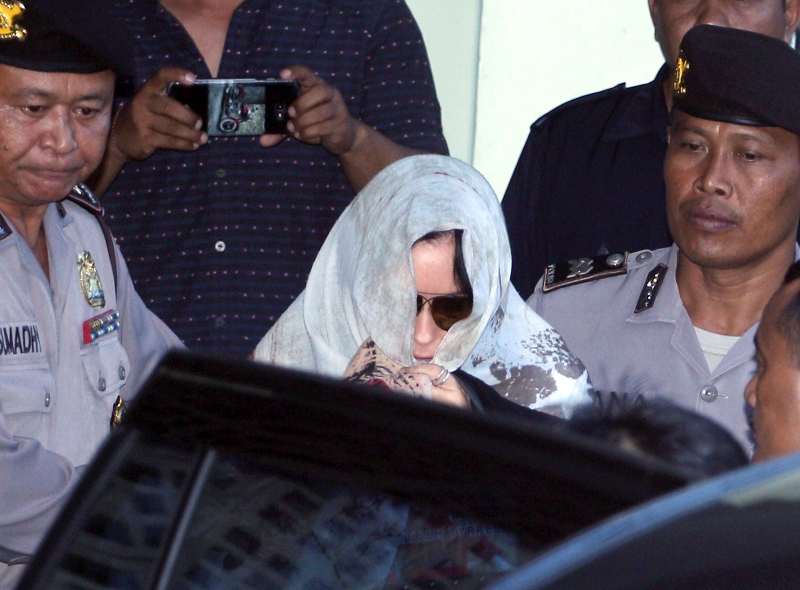 Australian drug smuggler Schapelle Corby covered her head with a scarf gets on a car as she leaves the parole office in Bali, Indonesia, Saturday, May 27, 2017. Indonesia on Saturday deported Corby, whose trial and imprisonment on the tourist island of Bali mesmerized her homeland for more than a decade. She was arrested in 2004 after customs officers at Bali’s international airport found 4 kilograms (9 pounds) of marijuana inside her boogie board bag, sparking a media frenzy in Australia on par with America’s O.J. Simpson trial. Photo: AP

BALI, May 28: Indonesia on Saturday deported Australian drug smuggler Schapelle Corby, whose trial and imprisonment on the tourist island of Bali mesmerized her homeland for more than a decade.

About 200 police officers were deployed to secure her deportation in Denpasar, Bali's capital, said Ida Bagus Adnyana, who heads Bali's Justice and Human Rights office. "Corby signed a document to end her parole. She is completely free now," he said.

Corby was escorted by officials to Bali's airport and was expected to take a Virgin flight back to Brisbane.

She was arrested in 2004 at the age of 27 after customs officers at Bali's airport found 4 kilograms (9 pounds) of marijuana inside her boogie board bag, sparking a media frenzy in Australia on par with America's O.J. Simpson trial.

The drama was tailor-made for TV: a photogenic Australian beach girl who had apparently fallen victim to corrupt officials in an Asian country that had come to be viewed with fear and suspicion after dozens of Australians were killed in the 2002 Bali bombings.

Corby's insistence that the drugs were planted by baggage handlers was dismissed as lies by Balinese prosecutors. A court sentenced her to 20 years in prison, though that was later reduced.

In 2014, after nine years behind bars, she was released but had to stay in Bali until her parole expired on May 27 this year. She kept a low profile, living in a villa on the tourist island with a Balinese boyfriend.

Australian media have been camped outside the villa for the past two weeks, attempting to catch a glimpse of the elusive Corby.

Hoping to fool reporters, friends and family members took to donning bizarre face masks as they went to and from the property.

In the beginning, polls showed that the vast majority of Australians believed Corby had been set up. Proving her innocence became a national cause, sparking "Free Schapelle" T-shirts and "Boycott Bali" banners.

Her face took the place of celebrities on magazine covers, but she was not beloved by all. Some dubbed her a bogan — Australian slang that means white trash.

Her release from prison in 2014 was predictably chaotic, with Corby enveloped in a crush of cameras, one Australian journalist shouting, "This truly is an amazing moment in history!"

Indonesians, who called Corby "Ganja Queen," were mystified by Australia's response. To them, the case was clear-cut, and the Australian outrage both ridiculous and overly nationalistic.

Over the years, unflattering reports about Corby's family emerged, sullying her image in many Australians' eyes. Today, few Australians still believe Corby's implausible story but remain fascinated by the saga.

Under Australian law, she will not be able to directly profit from telling her story.

KATHMANDU, Nov 8: Several drug stores across the country are running without registration for years. However, the government has not worked... Read More...

Dhulikhel Municipality submits report on SDGs to UN
54 minutes ago