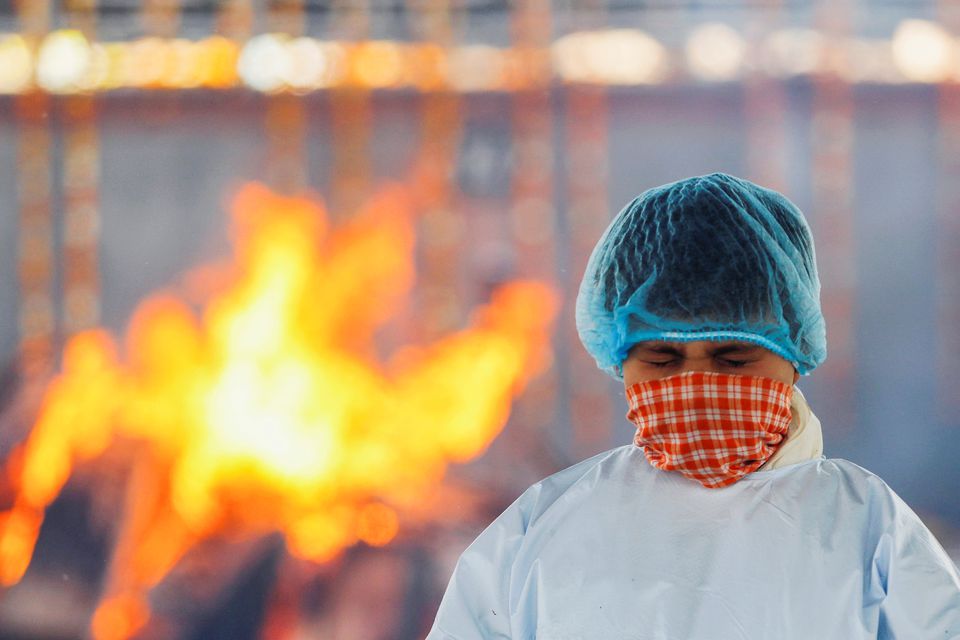 A boy reacts next to the body of his father, who died from the coronavirus disease (COVID-19), at a crematorium in New Delhi, India April 24, 2021. REUTERS/Adnan Abidi

The situation in the world’s second most populous country is “beyond heartbreaking”, World Health Organization chief Tedros Adhanom Ghebreyesus said, adding that WHO is sending extra staff and supplies including oxygen concentrator devices.

Where possible, military medical infrastructure will be made available to civilians, a government statement said, as new coronavirus infections hit a record peak for a fifth day.

"Air, Rail, Road & Sea; Heaven & earth are being moved to overcome challenges thrown up by this wave of COVID19," Health Minister Harsh Vardhan said on Twitter.

Modi said he had spoken to U.S. President Joe Biden about the crisis, discussing supply chains for COVID-19 vaccine raw materials and medicines. On Sunday Biden said his country would send medical supplies to India to help fight the pandemic.

Modi has urged all citizens to get vaccinated and to exercise caution amid what he called a "storm" of infections, while hospitals and doctors in some northern states posted urgent notices saying they were unable to cope with the influx.

In some of the worst-hit cities, bodies were being burnt in makeshift facilities offering mass cremations.

The southern state of Karnataka, home to the tech city of Bengaluru, ordered a 14-day lockdown from Tuesday, joining the western industrial state of Maharashtra, where lockdowns run until May 1, although some states were also set to lift lockdown measures this week.

The patchy curbs, complicated by local elections and mass festival gatherings, could prompt breakouts elsewhere, as infections rose by 352,991 in the last 24 hours, with crowded hospitals running out of oxygen supplies and beds.

"Currently the hospital is in beg-and-borrow mode and it is an extreme crisis situation," said a spokesman for the Sir Ganga Ram Hospital in the capital, New Delhi.

Following a fire at a hospital in the western diamond industry hub of Surat, five COVID-19 patients died after being moved to other hospitals that lacked space in their intensive care units, a municipal official told Reuters.

Television channel NDTV broadcast images of three health workers in the eastern state of Bihar pulling a body along the ground on its way to cremation, as stretchers ran short.

"If you've never been to a cremation, the smell of death never leaves you," Vipin Narang, a political science professor at Massachusetts Institute of Technology (MIT) in the United States, said on Twitter.

"My heart breaks for all my friends and family in Delhi and India going through this hell."

In Russia, which expects 50 million doses of its Sputnik V vaccine to be made each month in India this summer, a Kremlin spokesman expressed concern over the situation.

India, with a population of 1.3 billion, has an official tally of 17.31 million infections and 195,123 deaths, after 2,812 deaths overnight, health ministry data showed, although health experts say the figures probably run higher.

The surge in infections hit oil prices amid worries about a fall in fuel demand in the world’s third-biggest oil importer.

About 8.6 million voters were expected to cast ballots on Monday in the eastern state of West Bengal, in the final phases of a contest set to wrap up this week. Also voting in local elections was the most populous state of Uttar Pradesh, which has been reporting an average of 30,000 infections a day.

Virologists said more infectious variants of the virus, including an Indian one, have fuelled the resurgence.

Vaccine demand has outpaced supply as the inoculation campaign widened this month, while companies struggle to boost output, partly because of a shortage of raw materials and a fire at a facility making the AstraZeneca dose.

However, the federal government will not import vaccines itself but expects states and companies to do so instead, in a step aimed at backing domestic manufacturers, two government officials told Reuters. L4N2MF3ZM

Neighbouring Bangladesh sealed its border with India for 14 days, though trade will continue. Air travel has been suspended since Bangladesh imposed a lockdown on April 14 to combat record infections and deaths.

USA, April 25: The United States is deeply concerned by a massive surge in coronavirus cases in India and plans... Read More...