Leading a delegation comprising officials from the Ministry of External Affairs, the top Indian diplomat arrived at the Tribhuvan International Airport at 10:40 am on a chartered flight.

Officials from the Ministry of Foreign Affairs  including Foreign Secretary Bharat Raj Paudyal, Indian Ambassador to Nepal Vinay Mohan Kwatra and officials from the Indian Embassy welcomed Shringla at the VIP lounge, TIA. 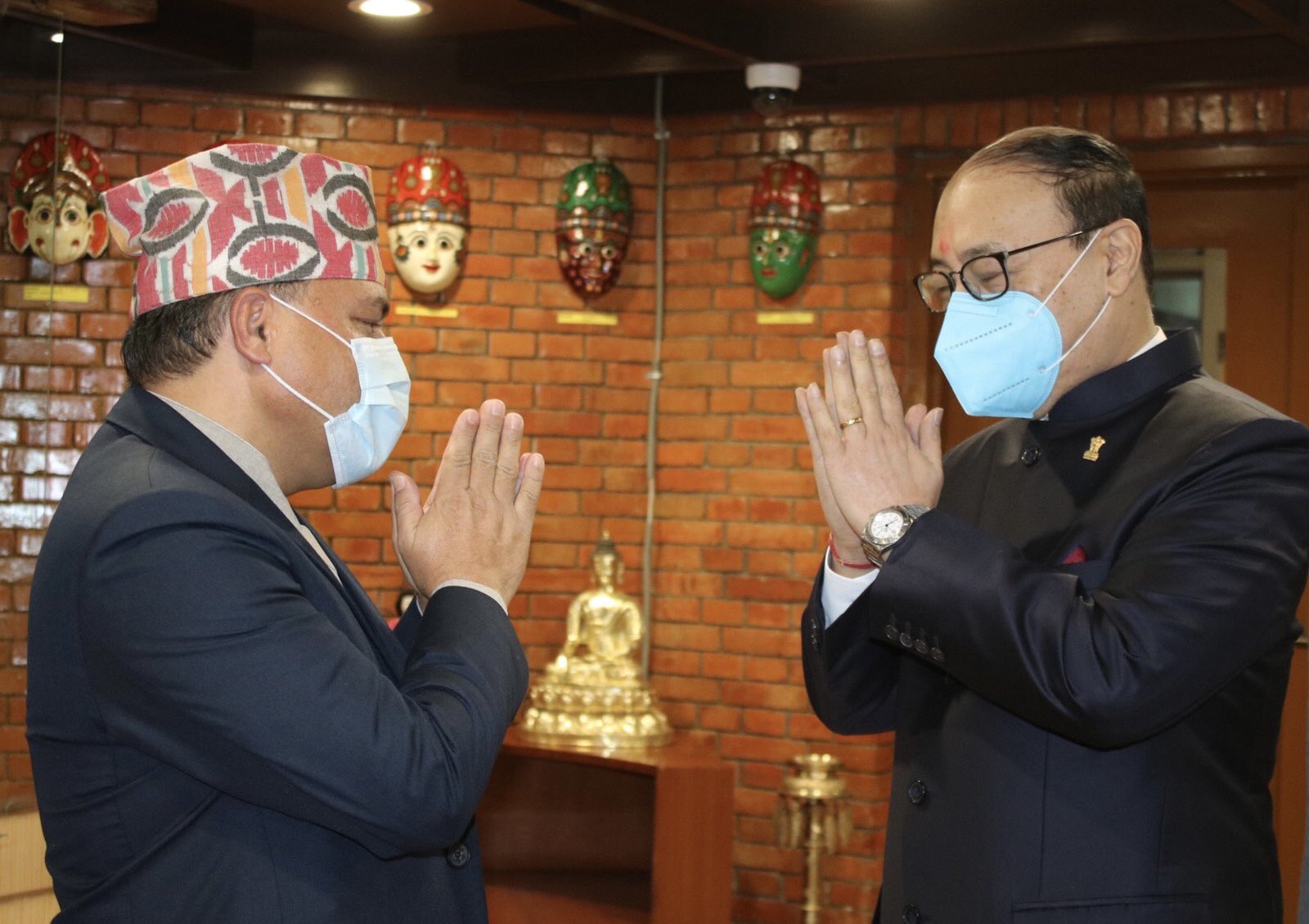 FS Bharat Raj Paudyal and his Indian counterpart Shringla greet each other at the VIP lounge, TIA. (Photo courtesy: Ministry of Foreign Affairs)

Talking to media persons at the TIA briefly, the Indian Foreign Secretary said that his visit is aimed at further deepening bilateral ties between the two countries. He also  said he wanted to come to Nepal earlier but he couldn't do so due to the COVID-19 pandemic.

This is the first visit of the Indian foreign secretary to Nepal since he assumed office ten months ago.

On Monday, Nepal and India jointly announced the maiden visit of Indian Foreign Secretary to Nepal.

“The visit is in continuation of the regular exchange of high level visits between the two friendly neighbors,” the MoFA said in a statement two days ago.

The two foreign secretaries of the two countries are holding bilateral meetings and discuss wide ranging areas of cooperation between Nepal and India today.

Foreign Secretary Shringla is scheduled to call on the high level dignitaries of Nepal including President Bidya Devi Bhandari and Prime Minister KP Sharma Oli during the visit. He will also call on Foreign Minister Pradeep Kumar Gyawali during his stay.

Foreign Secretary Shringla is also scheduled to hand over COVID-19 related support to the Government of Nepal.

Apart from that, he will also speak on Nepal-India relations at a public lecture being organized by a Kathmandu-based think-tank, on Friday.

“The visit is in keeping with the tradition of regular high-level exchanges between the two countries and the priority India attaches to its relations with Nepal,” said Indian Ministry of External Affairs in a press statement on Monday.

The visit of the Indian foreign secretary to Nepal comes at a time when the two countries are engaged in a fresh boundary dispute after Nepal introduced a new political map that includes Kalapani, Lipu Lekh and Limpiyadhura currently held by India. Nepal has been demanding to resolve the issue of boundary dispute through friendly negotiation at the level of foreign secretaries of the two countries as per the historical facts and evidence.

We are happy to support in Nepal's post-earthquake reconstruction: Indian Foreign Secretary