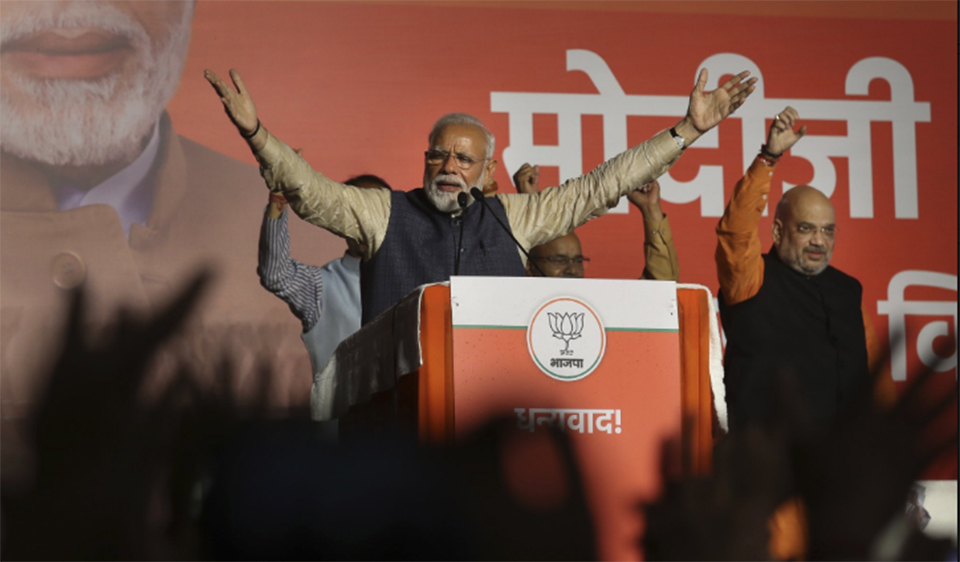 Modi met with his outgoing Cabinet ministers and later presented his resignation along with theirs to President Ram Nath Kovind. The president asked the officials to continue to serve until the new government assumes office.

Media reports say Modi is likely to be sworn in for his second term next Thursday.

The Election Commission announced that the BJP won 303 out of 542 seats in the Lok Sabha, the lower house of Parliament, after the official vote count finished Friday. That is well beyond the simple majority a party in India needs to form a government. The BJP’s top rival, the Indian National Congress led by Rahul Gandhi, won 52 seats, and the All India Trinamool Congress led by West Bengal Chief Minister Mamata Banerjee won 22.

Gandhi, whose great-grandfather, grandmother and father were all prime ministers, personally conceded his seat, long a Congress party bastion, to his BJP rival, India’s textiles minister, marking the end of an era for modern India’s most powerful political dynasty.

The victory in India was widely seen as a referendum on Modi’s Hindu-first politics that some observers say have bred intolerance toward Muslims and other religious minorities, as well as his muscular stance on neighboring Pakistan, with whom India nearly went to war earlier this year.

Analysts said voters will expect the new Modi government to quickly return to the business of economic reform, which the BJP effectively sidelined as a campaign issue after responding to a February terrorist attack in Indian-controlled Kashmir with an airstrike in Pakistan that stoked nationalist sentiments.

“Building up your national security credentials, as the only person who can stand up to India’s ‘enemies’ can only take you so far. The real question is can Modi deliver on his economic commitments, for example creating the high number of jobs needed? This is essential to address India’s growing wealth inequalities,” said Champa Patel, head of the Asia Pacific program at London-based Chatham House.

NEW DELHI, May 12: Voters in Delhi and elsewhere in India’s north lined up early on Sunday to cast their... Read More...