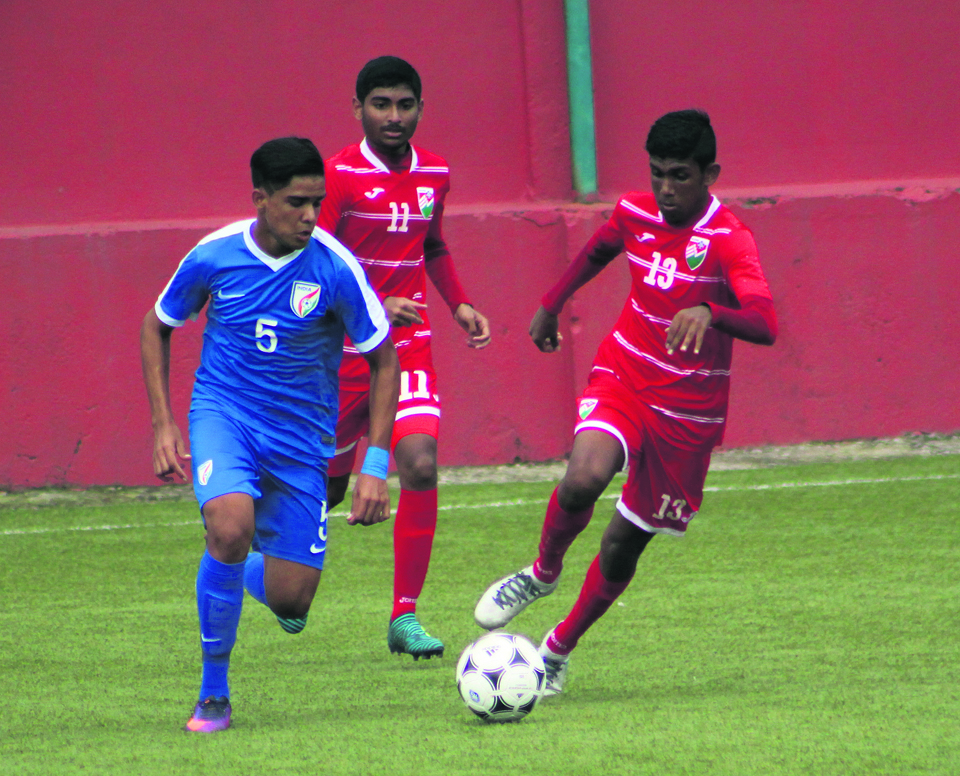 KATHMANDU, August 19: India made a wining start in the ongoing SAFF U-15 Championship as it registered thumping 9-0 win over Maldives at ANFA Complex Satdobato, Lalitpur on Saturday.

In the first match of Group B, Ravi Bahadur Rana kept India in a driving seat scoring an opener in the 21st minute while two minutes later the team’s lead was extended with 2-0 with Mohamed Faihaan Imran’s scoring an own goal. Rana netted his personal second in the 26th minute to make 3-0 for India. Moirangthem Thoiba Singh scored in the 41st minute to help Indian team finishing the first half with the score line of 4-0.

India started the second half brightly with Ravi completing his hat-trick in the 48th minute. To continue the India’s scoring form Ricky John Shabong struck the goal in 57th minute while skipper Vikram Pratap Singh made 7-0 in the 71st minute. Lalrokima struck winning team’s eighth goal in the 80th minute. Maldivian defender Imran scoring the second own goal in the 87th minute saw India sealing big margin win of 9-0.

After guiding his team to victory, Indian coach Bibiano Fernandes was still not fully satisfied with his players. “The result says we were superior but I still see some drawbacks in team and we need to improve them before the second match,” said Fernandes.

Meanwhile Maldivian coach Mohamed Shaazly praised his players despite the humiliating defeat. “I appreciate my boys for not giving up. They fought till the last minute despite failing in the scene.” said Shaazly.

Maldives ex-vice president detained on arrival by boat in India

INDIA, June 25: India has lowered the limits on the export of certain essential commodities such as potatoes, onions, and eggs... Read More...