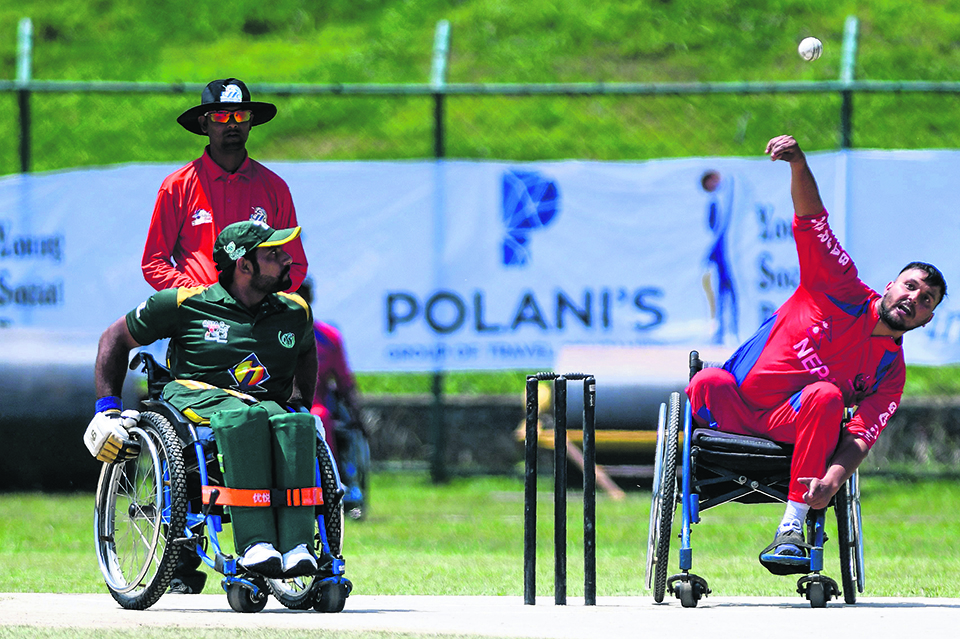 A player of Nepal wheelchair cricket team bowls during a group stage cricket match of the Wheelchair T20 Asia Cup at the Tribhuvan University Cricket Ground in Kirtipur on Friday.

KATHMANDU, May 18: India and Pakistan are set to clash in the final of the Wheelchair T20 Asia Cup after winning their respective final group games played in Tribhuvan University Cricket Ground in Kirtipur on Friday.

India with three and Pakistan with two wins finished top two on the points table qualifying for the final followed by eliminated Bangladesh with a sole win. Nepal finished the tournament at the bottom of the four-team table with no win in three matches.

Nepal played its last group game against Pakistan losing the match by 130 runs. Nepal won the toss and invited Pakistan to bat first. Player of the match Muhammad Latif scored a whirlwind 146 runs from 55 deliveries which included 23 boundaries and 6 sixes to help his team post a total of 269 runs for the loss of four wickets in 20 overs. He was supported by skipper Sajid Ali Abbasi’s 62 run from 36 deliveries which included 12 boundaries.

Dambar Magar and Yam Bahadur Shrestha shared a wicket each in forgettable day for Nepali bowlers.

In reply, Nepal was limited to 139 runs from 20 overs for the loss of six wickets. Skipper Digam Chemjong top-scored with 47 runs from 56 deliveries which included five boundaries.
Sagar Pandey chipped with 30 runs off 29 deliveries. Paksitan’s Muhammad Fiaz picked up two wickets supported by Muhammad Bilal and Adnan Nisar’s a wicket each.

In the other match of the day, India made it three wins in three matches after defeating Bangladesh by 30 runs. In another high-scoring innings of the day, India posted 203 runs for the loss of three wickets in 20 overs after winning the toss and electing to bat first.

India and Pakistan will face in the final of the Asia Cup on Saturday.