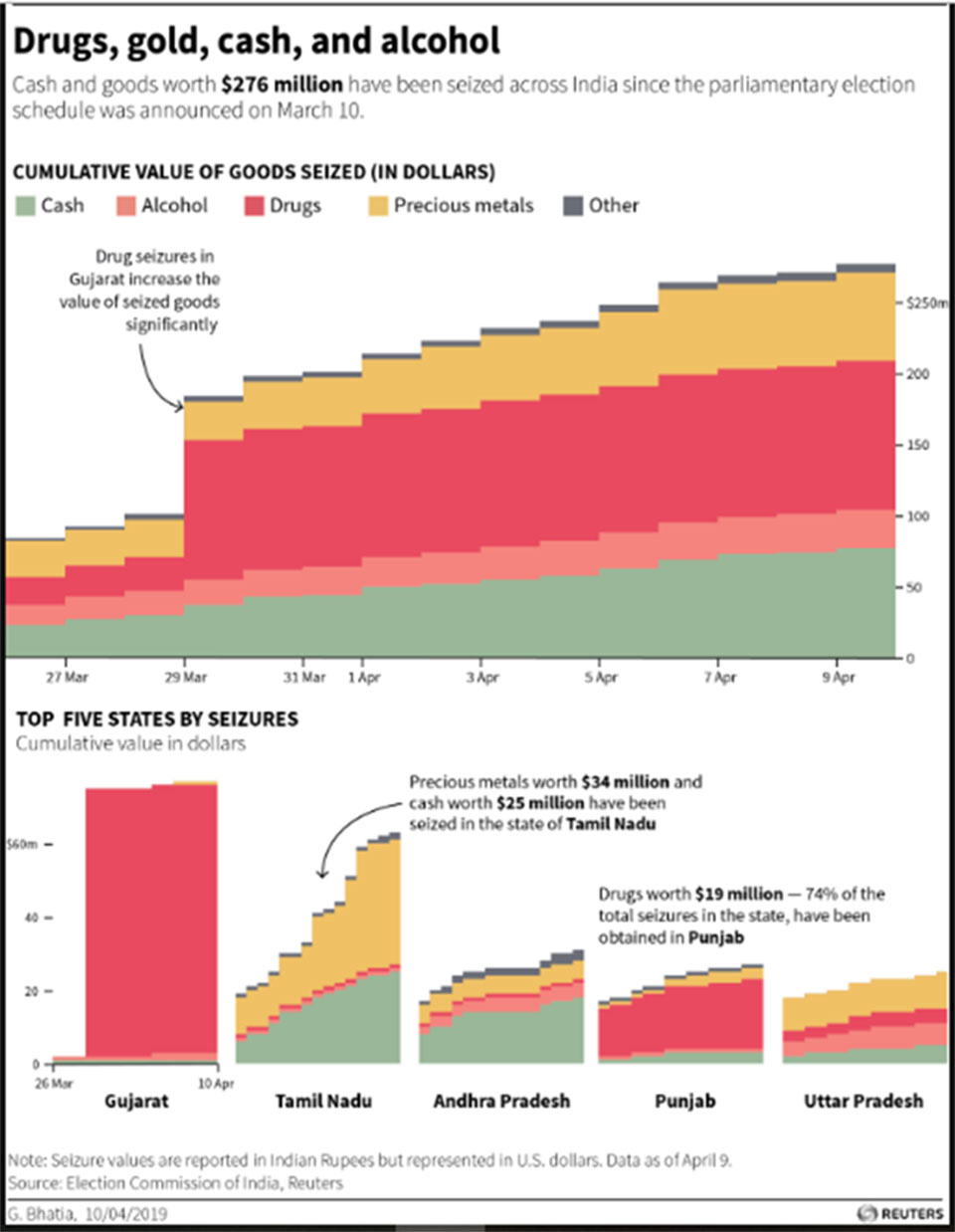 MUMBAI, April 15: India’s gold smugglers have slowed their operations over worries their shipments will be caught up in seizures of cash, bullion, booze and drugs that are aimed at controlling vote-buying in the country’s national elections, industry officials told Reuters.

In India, political parties and their supporters often offer money or goods in exchange for votes. The Election Commission, which monitors the polls, tries to prevent this by setting up highway checkpoints to seize cash, gold, liquor and other high-value items that candidates avoid mentioning in their expenses due to a cap on the amount they can spend.

Last month in Mumbai, in one of the biggest seizures since the current election was announced on March 10, the Directorate of Revenue Intelligence seized 107 kg of gold, worth about 300 million rupees ($4.3 million).

The slowdown in smuggling has boosted gold imports at banks in the world’s second-biggest buyer of the precious metal, allowing them to charge a premium over global prices.

“After a big seizure in Mumbai, smuggling has gone down drastically. Grey market operators don’t want to take the risk during the election period,” Anantha Padmanabhan, chairman of All India Gem and Jewellery Domestic Council (GJC) told Reuters.

India’s Election Commission as of April 14 has seized $365 million in cash, liquor, gold, drugs and other goods over the last month, more than double the $172 million confiscated in the last election cycle in 2014.

The random checking of vehicles and seizures have made it nearly impossible for smugglers and other “grey market” operators to move cash and gold from one place to another, said the head of the bullion division at a Mumbai-based private bank.

“This is helping banks. Our gold business has improved in the last few weeks,” he said.

Gold smuggling surged in India after the government raised the import duty to 10 percent in August 2013. Grey market operators - businesses that smuggle gold from overseas and sell it in cash to avoid the duties - got a further boost in 2017 when India imposed a 3 percent sales tax on bullion.

The grey market operators can sell gold at discounts to prevailing market prices as they evade paying the 13 percent tax, said Harshad Ajmera, a gold wholesaler in Kolkata.

But this week, even in the cash market, gold was sold at the market price, said Ashok Jain, proprietor of Mumbai-based gold wholesaler Chenaji Narsinghji.

Dealers were charging a premium of up to $2.50 an ounce over official domestic prices, the highest in nearly five months.

Up to 95 tonnes of gold was smuggled into India in 2018, according to the World Gold Council, although India’s Association of Gold Refineries and Mints and other industry bodies put the figure at more than twice that.

Election Commission rules makes it mandatory for people to show valid documentation if they are carrying more than 50,000 rupees ($722) in cash, or else it could be seized. This rule has been hurting the jewellery industry, especially in rural areas where more than half of gold is bought in cash.

The limit of 50,000 rupees is “too low for the jewellery industry” as even a small 20-gram (0.7-ounce) gold chain costs more than that, said Padmanabhan of GJC.

“Demand has fallen due to the cash restrictions. We have requested that the Election Commission raise the limit.”

KATHMANDU, Dec 22: Alarmed by the confiscation of 33 gold bars weighing one kilogram each from two Nepalis in India... Read More...

NEW DELHI, Sept 15: The Indian government has banned 328 combination drugs in a blow to both domestic and foreign... Read More...