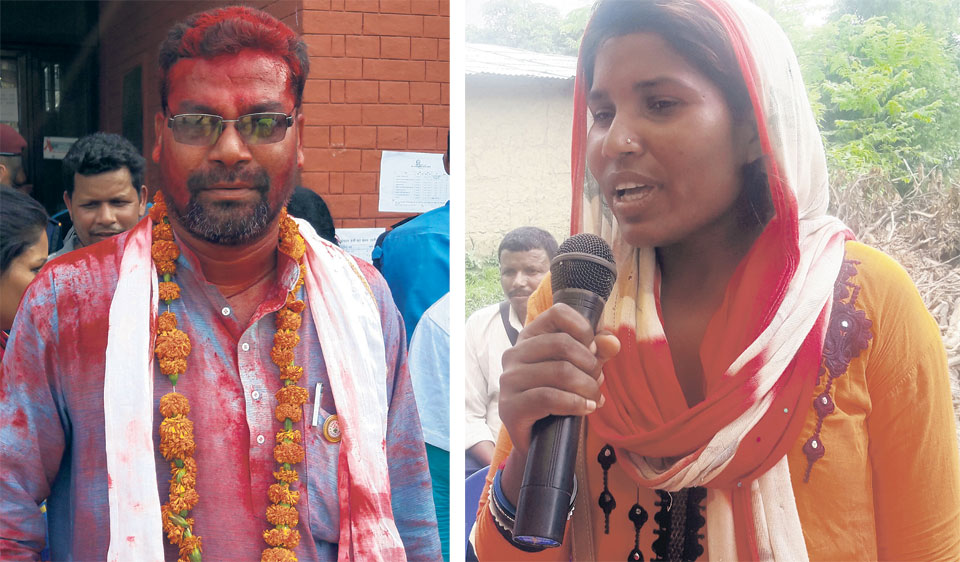 KATHMANDU, June 21: The local level elections this year have witnessed the emergence of new leaders from various walks of life. The inclusive spirit seen in the first round of elections has continued in the second phase also. Here are two representative cases that reflect the depth of inclusiveness political parties has adopted themselves to:

Nepali Congress has fielded a Dalit candidate, Nripa Od (Badi), for the post of mayor in Dhangadi, the only sub-metropolitan city of the province number 7. Badi, the party's chairperson of Dhangadi is probably the only Dalit candidate to have been picked for Mayoral post in a sub-metropolis across the country. Considered as a political and economic center in the region, Dhangadi's election outcome is considered very much important strategically.

Badi said that he felt honored and responsible for being chosen by his party for the mayoral candidate. There was fierce competition within the party, but he was rightly picked for the candidacy, he claimed. “I had been working for the party sincerely since long. The party rightly evaluated it and gave this chance to me,” he said. “Getting the ticket for the mayoral post has made me feel more responsible and honored. The love and support I have received from people would be paid off equally, I promise,” he added.

Badi stated that he is the only mayoral candidate from the Dalit community to fight for the post of mayor in a sub-metropolis across the country.  That makes him feel even more special, he said. “My party did justice with me and I think it was well aware of my contribution to the party,” he maintained.

Locals say Badi is popular in Dhangadi. As party's local chairman, he has been closely working with people and therefore has established a good reputation. Badi himself states that he has created a strong platform to win the election. “I have mingled with people for so many years and have been there for them during highs and lows. Nepali congress is popular in Dhangadi,” he claimed.

Just like other mayoral candidates, Badi has few remarkable agendas. Making Dhangadi a smart city, extending road network to every ward, drinking water, irrigation, health, education and other basic facilities are some of his promises. He said that infrastructural development would be his first priority, if elected. “I am also equally focused on generating employment opportunities. For that, we must promote tourism and agriculture,” he said.

Though his candidacy has been well received, it has buoyed the Dalits and other marginalized groups very much. Getting to see a member of their community picked up to field for mayoral post of a major sub-metropolitan has instilled in them with a sense of inclusion and happiness, he said.

Badi, 45, is a resident of Dhangadi Sub-Metropolitan City - 5, and is IA graduate. He joined the party as member of the party's student union in 1990.

Though not well educated, she was just like a leader in her community even earlier. However, for being from a marginalized and endangered community, Anita Santhyal had never thought even in her dreams that she could ever get an opportunity to influence people of other communities as well.

Thanks to the local level election, Santhyal is now fielding for the post of deputy chief of Jahada Rural Municipality. Even if she does not win the election, the candidacy itself is a huge change maker in her place, she believes.

Santhyal, who is seen busy these days meeting people from all communities and all walks of life, is fielding for the post from Nepali congress party ticket.

On Tuesday, she had a hectic schedule. Apart from canvassing door to door, she also participated in a number of election meetings in her locality. “We live in Jahada. Our community is considered endangered. We are extremely backward socially and economically. Politically, I am the first fielding for leadership position,” she said.

Santhayls are commonly called Satar. According to Santhyal, Nepali congress gave her ticket for two reasons: one, to fill gender gap and second, because she represents an endangered community. “The party gave me ticket as it wanted to bring a very backward community forward. We are considered an endangered community,” she said.

Jahada Rural Municipality is very close to Biratnagar city. Despite being close to the city, it is very much underdeveloped, she claims. Haphazard slum settlements are seen everywhere. Even though Biratnagar is emerging as a most happening city, Jahada remains aloof and neglected.

According to Santhayl, Jahada feels like a dark zone right under a lamp. “I have been working hard to win the support of the voters. I believe that I am not only woman candidate but a ray of hope for people who have not even received citizenship,” she said. Many people in Jahada from her and other disadvantaged communities have not received citizenship yet, she informed to Republica.

Dil Bahadur Chhatyal from Kailali and Ajit Tiwari and Durga Dulal from Biratnagar contributed to this report.

ITAHARI, Feb 27: Mishrilal Sah of Harinagara Rural Municipality-4 is a peon at the Sitaram Primary School in the village. However,... Read More...