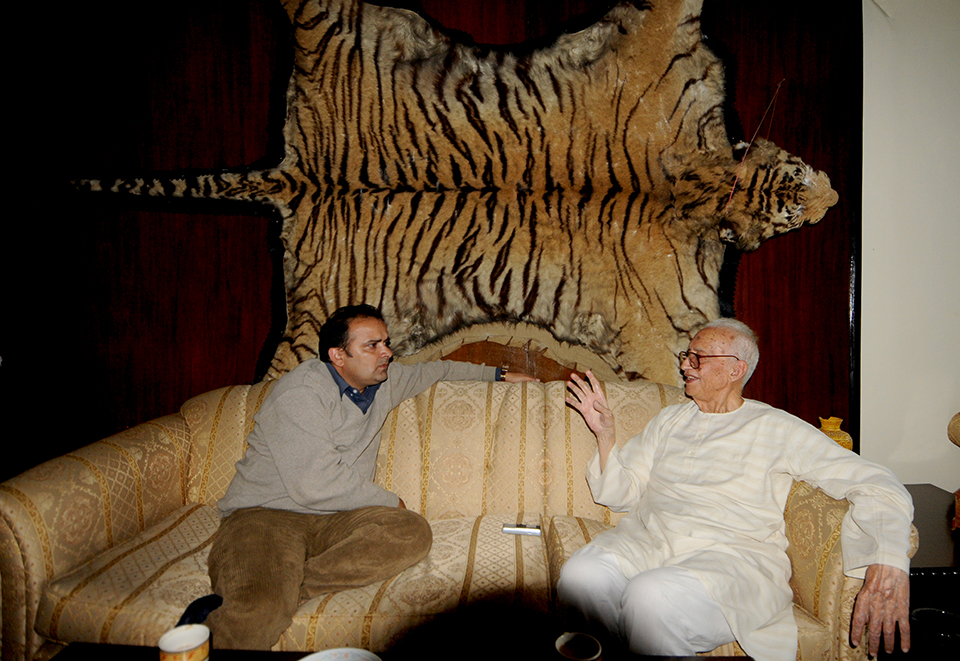 When I heard about his passing on November 11, I was not only shocked. I was also troubled that I had failed to meet him again, as I had promised.

It was October 6, 2015.  The Great Indian Blockade had choked the country. Fuel was hard to get. People had started to queue up for the few pieces of wooden logs the government was distributing. Unless somebody offered a ride it was hard to commute to office.

Newspapers had started to make comparison between blockades of 1969, 1989 and that of 2015. Nepali press was full of commentaries highlighting how India has been punishing Nepal every time Nepal tried to assert its sovereignty. There was anger against India and its Prime Minister Narendra Modi in tea stalls, grocery shops and the streets.
Those were the most disturbing, most painful and most difficult times for Nepal.
I and my Republica colleague Biswas Baral were looking for someone to interview, someone who had closely observed Indian highhandedness and who would speak up candidly. We settled on one name: Kirti Nidhi Bista.

I am Kirti Nidhi

Bista used to contribute opinion articles to Republica, in most of which he decried Indian hegemony and criticized Nepali leaders for failing to take stand with Indian leaders on Nepal’s sovereignty. I got his telephone number from journalist Yubaraj Ghimire. “Hello,” a soft voice said from the other end. “I want to speak to Kirti Nidhi Bista.”  “I am Kirti Nidhi,” he said. “I want to interview you for Republica.” He agreed.

I and photojournalist Keshab Thoker reached his house in Gyaneshwar.
A young lad came to open the gate for us. There were no security personnel, no other visitors. It felt like we had gone to a house of a commoner, not the person who had become prime minister three times. The young lad had us seated in the living room. Few moments later a tall man with gray hair in white Kamij entered the room. He had his attendant bring tea and biscuits for us. Informal conversation started.

He tried to be articulate and focused but often he would often digress. Age had weakened him, his hands trembled, voice faltered and his vision was poor. “I feel like writing a lot. But my hands do not comply,” he said, smiling. When it came to the blockade, he almost raged. “What are these leaders doing when the country is under attack? Why don’t they speak up against it?”

In around one-hour-long recorded conversation Bista told us how he and King Mahendra had taken bold stand against India. How he saved the country from becoming India’s ‘protectorate’ and so on. He would break down in tears now and then lamenting how current leaders have ruined the country.

Bista told us things I had little idea about: the blockade of 1969 was the result of the decision of his government to remove Indian check posts and military mission from Nepal. Indira Gandhi had become angry with him for doing this “in such a public manner” instead of settling the issue “diplomatically.” He later convinced her that Nepal intended no harm to India. After three years of this, he and King Mahendra normalized Nepal-India relations.

Then he made a bold statement. India has not been treating Nepal as equal since 1950, he said. “India is now free but it wants to colonize Nepal” (See his October 7, 2015 interview with Republica). “India uses our soldiers in the frontline of battle against Pakistan but it imposes blockade on Nepal in return,” he could not contain his anger. “Nepali leaders should not bow down before India. Death would be more dignified than surrender,” he said rising up from sofa, pointing his finger at invisible Nepali leaders before he sat down and regained the composure.

In informal conversation, Bista shared some personal and insightful details. I asked him how the idea of removing military mission was first conceptualized and how it finally materialized.

It’s a long story, he said:

The Indian check posts in northern border points and military mission in Kathmandu had raised question about our sovereignty in international forums.  Wherever we went, they would say ‘you claim to be a sovereign nation but look Indian missions are operating from Nepal.’ I would feel humiliated on such occasions. And one day I discussed the matter with the king.

“This is insulting your majesty,” I said.  “Outsiders are mocking us. We need to do something about it.” “I will find a way out,” the king assured. Few days later the king called me to a meeting.

“Kirti Nidhi, you take the decision and I will endorse it. But nobody should know about it beforehand. When we take this decision, India will react aggressively. I will blame you. To calm India down you might even have to resign. But I will reinstate you at appropriate time.”

I resigned as planned. When relations with India normalized he made me prime minister in 1971.

How you remember Bista depends on which side of his life you are interested to know. Bista is an open book, a lot has been written about him in Nepal’s foreign policy literature. You can call him a faithful follower of Panchayat, the system that choked Nepali politics for 30 years. So to sing his glory is to validate autocracy. A number of people want Bista to be remembered in this image.

For others, he was the king’s puppet and did what the king wanted him to. Therefore, Bista deserves no credit for whatever good that happened during his premiership.
Bista was a proud monarchist. As a prime minister who served under the king he would be unable to do anything without the king’s consent. But to take initiative to remove Indian check posts and India missions from Nepal and then again to take India into confidence few years later were no small feats.

This was the boldest foreign policy move of our times. So long as we believe Nepal did the right thing by removing Indian checkpoints, we will have to give credit to the person who did it: Kirti Nidhi Bista or to King Mahendra.

The success of a man is measured in terms of how much he earned, what kind of luxury he could afford and so on. But this is immaterial. Success of a man is also measured after death. How he is remembered (or if he is remembered at all) matters a lot. The fact that obituaries have been written (this one included) is the testimony that Bista was not one of those to be dismissed lightly.

On that October afternoon, I found him a living witness of history of the time before my birth. He appeared to be a history in making. I want to know everything about Panchayat Raj, will you allow me some time if I come again? I asked. “Please come. Few people come to meet this old man.”

I could never make it. If I had, perhaps he would have told me more, perhaps shared the secrets of Panchayat era. I would know more about him and the times he lived through.
With death we take away all memories, all secrets, all facts and all histories. We fade into memories of those who live. This is why it is important to talk, to share and to write about things we know so long as we live.

When I heard about his passing on November 11, I was not only shocked. I was also troubled by the fact that I had failed to meet him again. This inability to see him again will gnaw at me every time I will think of that tall, frail and proud old man, who took with him all the memories, facts and history that could have been of archival importance to us.

Even as he lay in his hospital bed, in the final hours, surrounded by loved ones, Baba was still telling... Read More...