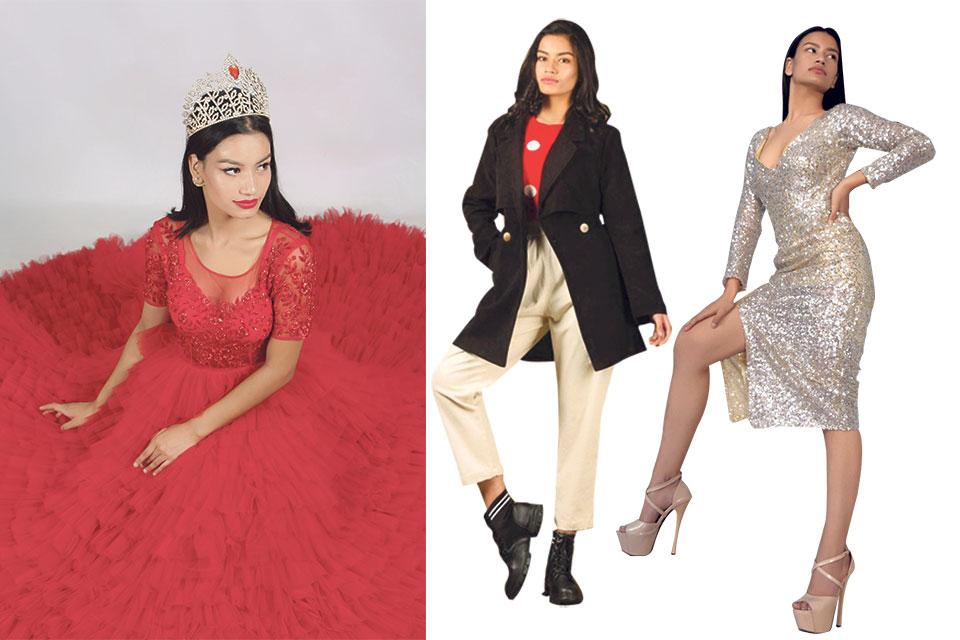 Curating an authentic style over following trends
Soniya KC’s foray into the fashion scene began when she won the Miss SEE pageant a few months ago. Currently a grade 11 student at Campion Academy, KC is a freelance model who takes up whatever projects that come her way. Although she is a fresh face in the fashion industry, KC has impeccable style that reflects her exuberant personality. Here, she opens up about her personal style and tells us what fashion means to her.

Loves formal wear
Although most people of KC’s age tend to dress themselves in casual and athleisure clothes, KC interestingly is more into formal wear. She mentions that every time she goes shopping—even if she has casual clothes in mind—she somehow ends up buying formal or tailored clothing instead of anything that can be worn regularly. She states that she likes dressing up in formal and tailored attire because they make her look smart, mature and chic—and most importantly, they make her feel comfortable. She also says that she mostly sticks to clothing in dark tones—especially in the color black—but admits that she does sometimes buys more colorful items in a bid to try something different.

How she dresses herself
KC claims that the most important thing she considers while getting ready for any occasion is how comfortable she feels in the clothes she wears. The other two factors that determine what she wears are the weather and where she is heading to. “Generally, if I’m going to a family function, I wear kurtas. For a meeting or an important event, I wear formal clothes and for a casual outing with my friends, I wear something casual and low profile,” says KC.

Not into trends
One of KC’s biggest qualms with the contemporary fashion scene is how everyone is obsessed with trends. She mentions that she doesn’t think trends are very important and never really wears trendy clothing. “I don’t see the point in everyone wearing the same clothes. I’d rather wear something different and stand out in a crowd,” says KC. She further explains that donning items that are trendy prevents people from experimenting with their style and figuring out their personal style—two things that KC believes are more important than fitting in with everyone else by wearing “trendy” pieces of clothing.

Where she takes fashion inspiration from
KC developed a big part of her personal style herself—trying out different things and seeing how they make her look and feel. Because she isn’t someone who follows trends, she doesn’t make an effort to flip through magazines or scroll through online fashion sites looking for tips on styling or what’s new in the fashion world. But there are a few people from whose personal style inspires KC. She names Malika Arora and Malvika Subba as the two fashion icons whose personal style she respects the most. She explains that she thinks both of these women have a great sense of fashion and that she likes the way they carry themselves and the confidence they exude in everything they wear.

Her choice of accessories
As someone who likes keeping things simple and clean, KC doesn’t wear much—if any—accessories when she’s out. She mentions that most accessories including neckpieces and earrings just add weight to her body making her feel uncomfortable and restricted while she’s moving around. So, she prefers keeping her neck, earlobes and wrists bare. But the one accessory she wears almost everyday is the ring she bought for herself sometime ago from Masala Beads that has ‘I love you’ written in 100 different languages. “It’s my way of expressing my trust and love for myself,” she says.

A trend she despises and what she would never wear
One trend KC has noticed every Nepali man give into is wearing a leather jacket with fur accents. She mentions that she is tired of seeing so many people wear it everywhere and wishes men would be more selective and creative with their outfit choices instead of buying the same thing everyone else has.

Even though she is open to trying out different things, KC states that she has never been a fan of excessively open dresses. She adds that as she doesn’t want to expose her body too much, she wants to stay away from tiny dresses which seem to be quite the rage among youngsters.

Five most worn items from KC’s closet
Heels
KC lives, breathes and functions in heels. Her personal favorite is a pair of golden heels that she wore during the finals of Miss SEE as she thinks they’re lucky for her.

Bodycon dresses
KC is a big fan of bodycon dresses and owns multiple pieces of these that she wears all year round as she finds them to be very comfortable. She states that she likes her sky blue dress in particular because that was the first thing she bought for herself from her very first earnings.

Crop t-shirts
You might be thinking KC is very basic for naming crop tops as one of her favorite clothing items but KC has her own interesting rules about when and where to wear them. She mentions that because they are very comfortable and provide mobility, she wears them around the house very often. But you will never see her in crop tops as she never really wears them in public. Her favorite is a black one that she wears very frequently.

Side bags
As KC doesn’t carry a lot of things with her while she’s out, she states that she doesn’t need big bags. She admits that if whatever she’s wearing has big pockets where she can stuff her phone and wallet then she won’t even carry a bag. But as most women’s clothing either have tiny pockets or none at all, she carries a small side bag with her.

Skirts
KC’s favorite outfit combo to flaunt around is a flowy skirt styled with heels. She explains that she usually wears cotton skirts as they are comfortable to wear and avoids denim skirts because they are too rigid and feel tight as well.

Traditionally and culturally speaking, our clothes and the dressing style are heavily dependent on natural fibers. Moreover, our parents and... Read More...

Beauty, they say, is in the eyes of the beholder. In real life too, this has proven to be true.... Read More...

With the beauty industry being one that is always growing, there are always new products and trends that people will... Read More...

Accept the truth
2 hours ago

43 more COVID-19 patients recover in Birgunj, no patient in Narayani Hospital
10 hours ago