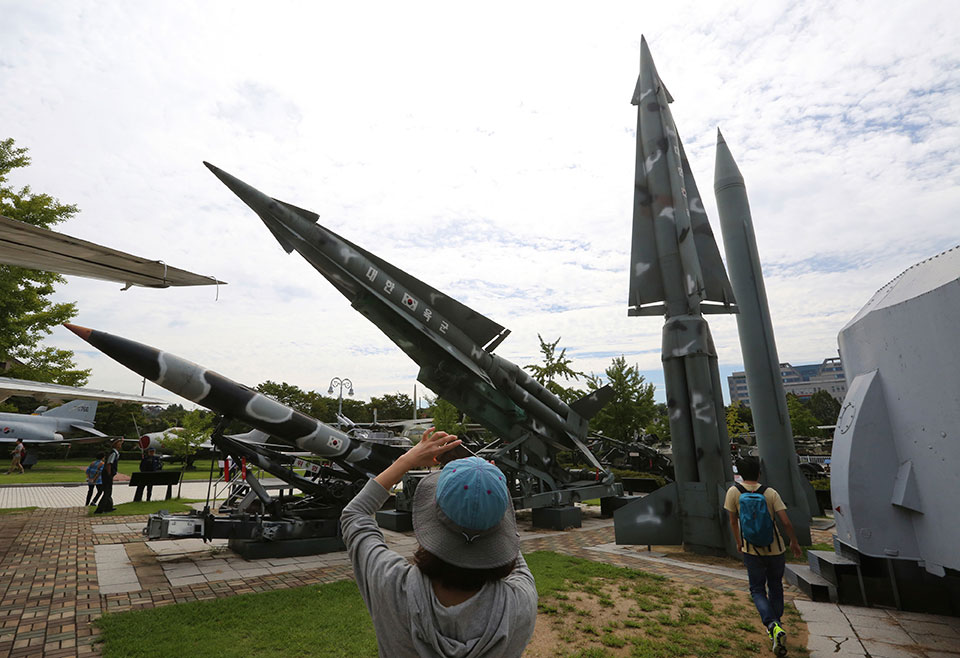 A mock North Korea's Scud-B missile, right, and South Korean missiles are displayed at Korea War Memorial Museum in Seoul, South Korea, Tuesday, Aug. 29, 2017. In a first, North Korea on Tuesday fired a midrange ballistic missile designed to carry a nuclear payload that flew over Japan and splashed into the northern Pacific Ocean, officials said. The aggressive missile launch _ likely the longest ever from the North _ over the territory of a close U.S. ally sends a clear message of defiance as Washington and Seoul conduct war games nearby. (AP)

SEOUL, South Korea, Aug 29:  In a first, North Korea on Tuesday fired a midrange ballistic missile designed to carry a nuclear payload that flew over Japan and splashed into the northern Pacific Ocean, officials said. The aggressive missile launch — likely the longest ever from the North — over the territory of a close U.S. ally sends a clear message of defiance as Washington and Seoul conduct war games nearby.

South Korea's Joint Chiefs of Staff said the missile traveled around 2,700 kilometers (1,677 miles) and reached a maximum height of 550 kilometers (341 miles) as it traveled over the northern Japanese island of Hokkaido. The distance and type of the missile tested seemed designed to show that North Korea can back up a threat to target the U.S. territory of Guam, if it chooses to do so, while also establishing a potentially dangerous precedent that could see future missiles flying over Japan.

Any new test worries Washington and its allies because it presumably puts the North a step closer toward its goal of an arsenal of nuclear missiles that can reliably target the United States. Tuesday's test, however, looks especially aggressive to Washington, Seoul and Tokyo.

The North has conducted launches at an unusually fast pace this year — 13 times, Seoul says — and some analysts believe Pyongyang could have viable long-range nuclear missiles before the end of President Donald Trump's first term in early 2021.

Seoul says that while the North has twice before fired rockets it said were carrying satellites over Japan — in 1998 and 2009 — it has never before used a ballistic missile, which is unambiguously designed for military strikes. The North also chose not to fire its most recent missile at a lofted angle, as it did in previous launches to avoid other countries, and Seoul's spy service said the North launched from an unusual spot: North Korea's international airport in the capital Pyongyang. The South Korean military was analyzing whether the North had launched the Hwasong-12, a new intermediate-range missile that Pyongyang recently threatened to fire into waters near Guam, which hosts a major U.S. military base that the North considers a threat.

Tuesday's missile landed nowhere near Guam, but firing a Hwasong-12 (Hwasong is Korean for Mars, or Fire Star) so soon after the Guam threat may be a way for the North to show it could follow through if it chose to do so. Guam is 3,400 kilometers (2,112 miles) away from North Korea, but South Korea's military said the North may have fired the most recent missile at a shorter range.

South Korea's spy agency told lawmakers in a closed-door briefing that the North fired the missile from an airfield at Pyongyang's international airport in Sunan, in Pyongyang. Some outside observers said launching a road-mobile missile from an airport runway could demonstrate the North's ability to fire its missiles from anywhere in the country. It was not immediately clear what the launch meant for civilian flights using the airport.

The National Intelligence Service also told lawmakers that it was unclear whether the missile's warhead survived atmospheric re-entry, according to the office of Kim Byung-kee, a lawmaker in attendance. Separately, the spy agency said that North Korean leader Kim Jong Un's third child was born in February, but provided no other details.

North Korea will no doubt be watching the world's reaction to see if it can use Tuesday's flight over Japan as a precedent for future launches. Japanese officials made the usual strongly worded condemnations of the launch. There were no immediate tweets from Trump.

"We will do our utmost to protect people's lives," Japanese Prime Minister Shinzo Abe said. "This reckless act of launching a missile that flies over our country is an unprecedented, serious and important threat."

Tokyo said there was no reported damage from the missile, which Japan's NHK TV said separated into three parts. Residents on Hokkaido were warned of a North Korean missile launch by a "J-Alert" on their cellphones, with loud alarms and an email that told people to stay indoors. A radio speaker broadcast an alert saying "missile is passing, missile is passing."

A U.S. congressman visiting Seoul said Washington is now pressuring North Korea to abandon its nuclear ambitions by shutting down the impoverished country's access to hard currency, the lifeblood of its expensive weapons program.

The goal is to offer international banks that do business with Pyongyang a choice between bankruptcy and freezing North Korean accounts, U.S. Rep. Ed Royce, the Republican chairman of the House Foreign Affairs Committee, said in an interview after meeting with South Korea's leaders.

Tuesday's launch comes days after the North fired what was assessed as three short-range ballistic missiles into the sea and a month after its second test of an intercontinental ballistic missile, which analysts say could reach deep into the U.S. mainland when perfected.

In an unusual move, the military in Seoul released footage of three South Korean missile tests conducted last week. The videos showed two types of new missiles with ranges of 800 kilometers (497 miles) and 500 kilometers (310 miles) being fired from truck-mounted launchers.

South Korea's Agency for Defense Development said the launches represented the last flight test for the longer-range missile before it is operationally deployed. Such missiles, which would be the latest additions to South Korea's Hyumoo family of missiles, are considered key components of the so-called "kill chain" pre-emptive strike capability that the South is pursuing to counter the North's nuclear and missile threat.

The North's launch over Japan shouldn't be a total surprise. Earlier this month, when threatening to lob four Hwasong-12s into the waters near Guam, North Korea specifically said they would fly over Japanese territory. North Korea in June also angrily reacted to the launch of a Japanese satellite it said was aimed at spying on the North and said Tokyo was no longer entitled to fault Pyongyang "no matter what it launches or whether that crosses the sky above Japan."

North Korea typically reacts with anger to U.S.-South Korean military drills, which are happening now, often testing weapons and threatening Seoul and Washington in its state-controlled media. But animosity is higher than usual following threats by Trump to unleash "fire and fury" on the North, and Pyongyang's Guam threat.

Kim Dong-yub, a former South Korean military official who is now an analyst at Seoul's Institute for Far Eastern Studies, said the early flight information suggests the North Korean missile was likely a Hwasong-12. Other possibilities, he said, include a midrange Musudan, a missile with a potential 3,500-kilometer (2,180-mile) range that puts much of the Asia-Pacific region within reach, or a Pukguksong-2, a solid-fuel missile that can be fired faster and more secretly than weapons using liquid fuel.

North Korea first fired over Japanese territory in August of 1998 when a multistage rocket that outside experts called "Taepodong-1" flew about 1,500 kilometers (932 miles) before landing in the Pacific Ocean. The North later said it had launched a satellite; Seoul later said it was a rocket launch.

North Korea flew another rocket over Japan again in April 2009 and said that, too, was carrying a satellite. The North claimed success, but the U.S. North American Aerospace Defense Command says no satellite reached orbit. Some parts of a space launch vehicle reportedly flew over Okinawa last year after separating from the rocket.

Pyongyang regularly claims the U.S.-South Korean military drills are an invasion rehearsal, and North Korea's U.N. ambassador, Ja Song Nam, wrote recently that the exercises are "provocative and aggressive" at a time when the Korean Peninsula is "like a time bomb."

Some pictures from Teku Hospital: Patients are treated at corridors as hospital runs short of beds
7 hours ago

Govt says ICU beds are available, but hospitals have a different story to tell
10 hours ago

As private hospitals turn away COVID patients, government hospitals treat them in chairs and corridors
16 hours ago

E-commerce companies’ survival at stake, urge govt to allow their operation
15 hours ago

Some pictures from Teku Hospital: Patients are treated at corridors as hospital runs short of beds
7 hours ago

Govt says ICU beds are available, but hospitals have a different story to tell
10 hours ago

E-commerce companies’ survival at stake, urge govt to allow their operation
15 hours ago

As private hospitals turn away COVID patients, government hospitals treat them in chairs and corridors
16 hours ago

Myagdi district is self-sufficient in oxygen
16 hours ago

COVID-19 spreads to rural India, villages ill-equipped to fight it
16 hours ago