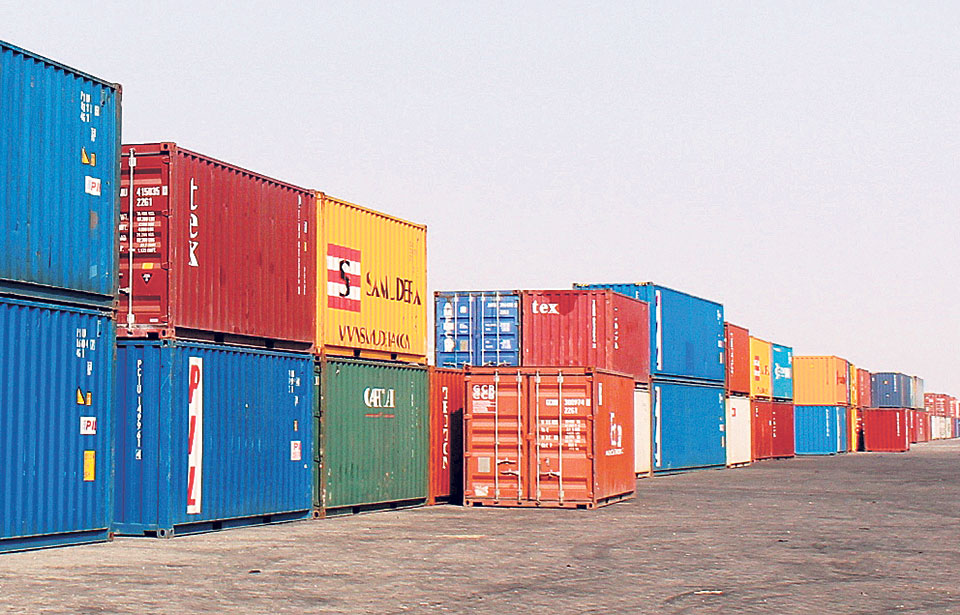 BIRGUNJ, March 15: Traders have started stockpiling imported goods at the dry port after Minister of Finance Yuba Raj Khatiwada directed customs valuation to stop under valuation of goods at the customs points.

Customs officials say traders are buying some time anticipating some flexibility in the rules in the near future.

Though it has been only a week since customs started tightening valuation goods, the dry port is already seeing congestion due to stockpiling of goods. The number of containers at the dry port, which was only 200 on February 27, has now reached 560. Goods of another 500 containers have been stored at the go-down of the dry port.

As importers have to pay detention charge to shipping companies if the container is not returned on time, some traders have unloaded goods at the dry port itself. But they are not taking initiative for clearance of goods from the customs.

“I cannot explain the reason. But the number of containers coming to the dry port has declined after traders started storing imported goods at the dry port,” Bishnukant Chaudhary, CEO of Himalayan Terminals, which operates the dry port, said. “Effects of such act have also been felt at the Kolkata port. Around 640 container racks are at the port waiting to be transported to Nepal.”

The indifference of traders toward clearance of imported goods from the customs has also affected revenue collection. Till February 27, the customs office at the dry port was collecting revenue as per the target. Now, revenue collection has fallen to around 70 percent of the target. Because of this, the Birgunj Customs Office is likely to miss revenue target for this month (Falgun), according to Santosh Yadav, the spokesperson for Birgunj Customs Office.

The customs office has been given a target of collecting Rs 350 million per day in the current fiscal year.

After assuming office at the finance ministry, Khatiwada has directed customs officials to tighten customs verification. Similarly, customs offices have been told to accept only Letter of Credit as the means of payment.

Shree Krishna Nepal, deputy director general of Department of Customs, said that traders can declare the value and details of the imported goods. “We cannot comment on why the traders did not go to the customs office for verification of imported goods,” Nepal said, adding: “We will investigate only if customs officials themselves are delaying customs clearance.”

Stating that traders have the freedom to challenge if they are not satisfied by verification done by the customs offices, Nepal said he does not see any reason behind reluctance of traders to come for clearance of their imported goods.
“Our motive is not to discourage traders. But it seems that they are a big hesitant due to tightening of customs rules,” added Nepal.

Hotel industry should be made an industry of national priority thru law: HAN President Rana
3 minutes ago