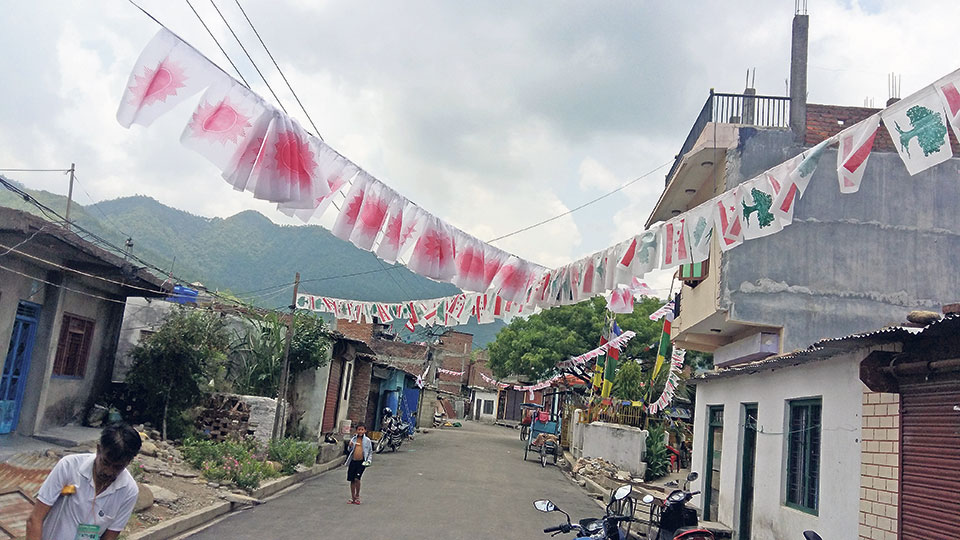 BUTWAL, Oct 29: The banks of the Tinau River are fast being covered by newly-made concrete houses. Due to the lack of monitoring and regulations, the riverbank has been widely encroached upon by ‘squatters’. Locals say the river is actually narrowing due to the encroachment, adding to the risks of floods in the monsoon.

Moreover, the illegally constructed houses are not simple and one-storey. Locals allege that huge buildings have been built on the riverbanks with the support of the local administration and political parties.

“The mafia is involved. It is crystal clear. They can then take away any amount of sand, stones from the river,” said a local businessman requesting anonymity. “The rivers are being claimed. All the dry land or the riverbanks are being covered by newly-built houses. And the local administration has turned a blind eye to it. The political parties, too, are silent because they have investment in it,” he added.

The squatters have transformed the riverbanks into a settlement. In no way do they look like squatters and the registration of the land plots may be possible in the days to come, the businessman warned.

According to the locals, the encroachment of riverbanks started in Butwal about a decade and a half ago. Not only the Tinau riverbanks but also other open public spaces have been turned into private property.

As per the data of the office of Butuwal Sub Metropolis, there are around 6,000 households in the settlements on the riverbanks. Buddhanagar, Durganagar, Upper Majuwa, Lower Majuwa, Shantinagar and Saubhagyanagar, among others are the new settlements of the squatters.

Until six years ago, those areas would be flooded by the Tinau water almost every year. Upper Majuwa was flooded so badly seven years ago that the embankment there was destroyed and had to be rebuilt. Now, people have already built houses on the other side of the embankment. And then, a new embankment was built for the safety of the same new settlement.

Bharat Sapkota, a government engineer who oversees embankment related projects said that the new settlements came into existence as the river was narrowing down. He however did not like to shed light on the risk of floods in those areas.

A decade ago, the sub metropolis had made a dumping site at New Shantinagar. The sub metropolis officials had heaved a sigh of relief to have found a ‘suitable place’ to dump the waste of the town. However, encroachers did not spare even the duping site. After the open space was all captured by them, they started encroaching upon the dumping site. New cottages were erected overnight and the sub metropolis was warned against throwing waste there. The squatters hit the streets demanding the right to live there. The administration turned helpless.

“They built new huts there. They did not allow us to continue it as a dumping site and we could do nothing about it. We could not chase them away and free the land,” said an officer at the sub metropolis.

Now the settlements of the squatters look pretty good. There is no tension of power and drinking water supply. Black-topped roads have linked those houses.

Locals believe that the houses are mostly of politicians and their relatives. Due to the backing of the political parties, the administration has not been able to take action against such illegal settlements, they say.

“The settlements look better than ours. If such activity is not discouraged, the remaining open space would also be fast taken away. This is quite worrisome,” the businessman remarked. He added that the culture of encroachment and impunity to such people only promotes corruption.

Even though rounds of meetings were held at the sub metropolis office on the issue and political party representatives were asked to cooperate to free the encroached land, there has been no positive result. The representatives of the major parties commit to take ‘right action’ during such public meetings. However, the story of encroachment has been as it is.

Instead, during the local level elections, the parties assured the squatters of land ownership certificates in return of votes. A squatter Bir Bahadur Thapa of Durganagar expressed hope that the parties might give him a land ownership paper soon.

Meghraj Dhital, a geologist, meanwhile warned that the settlements are not safe. “Those settlements could be washed away anytime. They are at a very high risk of floods,” he said.
A huge number of squatters have applied for land ownership certificates.

Flood alert raised in Koshi settlements, but no imminent danger

KATHMANDU, July 15: The Flood Forecasting Section of the Department of Hydrology and Meteorology (DHM) issued a flood alert in... Read More...