IBN to showcase some 50 projects for FDI 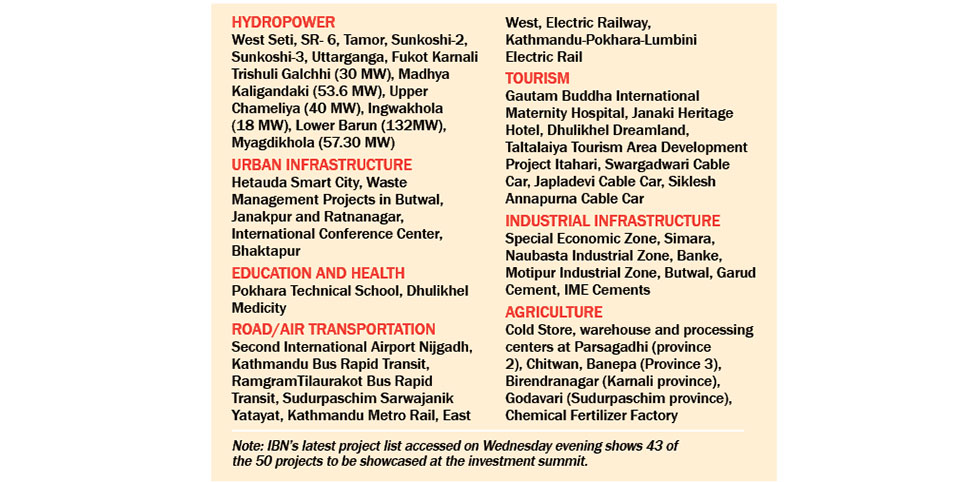 Projects of local, provincial levels give a sense of federal structure in project selection

KATHMANDU, March 15: Investment Board Nepal (IBN) has prepared a list of 50 projects for showcasing to foreign investors at the Nepal Investment Summit 2019 scheduled for March 29 and 30.

IBN has itself readied 32 of the projects, many with preliminary study reports. It is also set to exhibit 11 projects under the private sector , according to a list updated till Wednesday evening. IBN officials say they may add a few more projects to the list during the IBN board meeting scheduled for Friday. The IBN board is chaired by the prime minister.

IBN will present the projects with all their features , including financial analysis, according to IBN.

The project selection provides a sense of the federal setup, with priority projects of different provinces and also a few local level ones included as well.

“We have given equal importance to projects of local and provincial levels as per their own priorities,” said Maha Prasad Adhikari, CEO of IBN.

Kathmandu Bus Rapid Transit is a federal government project and is aimed at providing rapid transit on the key roads of the Valley .

At the investment summit, investors will also be offered five different projects spanning cold storage, warehousing and a processing center for the different provinces .

There are also five projects in tourism infrastructure, including at local and provincial levels. Likewise, IBN has prepared 13 projects in hydro-power including six in the private sector, for showcasing at the summit—a mega event being organised by the all-powerful two third majority government.

Likewise, two educational and health sector projects and three in industrial infrastructure are also ready for investors. Three urban infrastructures have made it to the list and two cement factories and three cable car projects are being prepared also.

The projects are in the process of acquiring final shape and the costing is likely to be completed within a few days, according to IBN officials. Up to 400 delegates have confirmed their participation in the summit and most of them are from China and India, according to IBN.

IBN had exhibited eight projects at the investment summit in 2017 . This time it has left out three projects, namely Tamakoshi III, Integrated Solid Waste Management Project and Kathmandu Hetauda Tunnel Highway. Tamakoshi III is already taken up by a private party and the solid waste project is now in the implementation phase. The tunnel highway has been left out, possibly because it is not immediately feasible.

KATHMANDU, March 31: With the successful organization of the two-day investment summit, the government has said that the real journey to... Read More...

More than 600 participants from 40 countries will participate in the Investment Summit to be held in Kathmandu from Friday.... Read More...