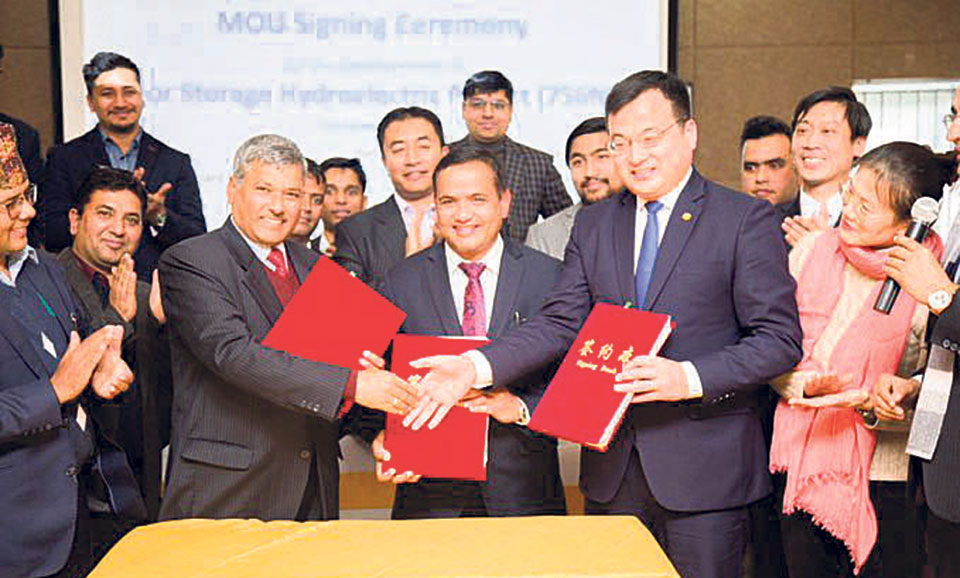 KATHMANDU, Jan 20: The Office of Investment Board Nepal (IBN) on Sunday signed a memorandum of understanding (MoU) with the joint venture of Hydroelectricity Investment and Development Company Ltd (HIDCL) and Power China to conduct detailed feasibility of Tamor Storage Hydroelectricity Project (756 MW).

According to Adhikari, Tamor Storage Hydroelectricity Project was one of the major energy projects that the government had showcased during the Nepal Investment Summit 2019 held in March last year. The government had put forth a total of eight hydropower projects in the conclave.

In March 2019, IBN had invited Expression of Interest for investment in Tamor Storage Hydropower Project from potential investors. In August same year, the board sought proposals from three shortlisted companies – Power China, Nebras Power Holding of Qatar and Fuji Electric Company Ltd. However, only HIDCL-Power China JV had submitted the proposal within the stipulated timeframe i.e. September 15.

The government awarded the contract to the joint venture to build the project under the public-private-partnership (PPP) model during Chinese President Xi Jinping's two-day state visit to Nepal in October.  The joint venture is now mandated for development, operation, management, maintenance and transfer of the hydropower project.

HIDCL and Power China had jointly submitted a project development proposal at the IBN to build the project. While the Chinese firm will hold 54% of shares in the joint venture, the local firm will have 46%.

The project will cover three districts of Province 1 – Taplejung, Tehrathum and Panchthar. It is estimated to cost US$ 1.21 billion including the cost to build 75-kilometer 400 kVA transmission line from the project site to Inaruwa of Sunsari district as well as interest on bank loans.

The government of late has been prioritizing the construction of reservoir-based hydropower projects.

According to the board, the catchment area of Tamor River spread over 5,094 sq km receives an average of 80% of rainfall during the monsoon i.e. June to September.

Similarly, it receives water at an average flow of 310 cubic meters per second. The reservoir to be built can stock water level at 550 meters of depth.

KATHMANDU, May 19: Minister for Industry Nabindra Raj Joshi has said that the Investment Board Nepal (IBN) should collaborate with different... Read More...

What’s the matter with China?
15 hours ago

“No one remains hungry, and no one dies of hunger,” reiterates PM Oli
16 hours ago

“No one remains hungry, and no one dies of hunger,” reiterates PM Oli
16 hours ago