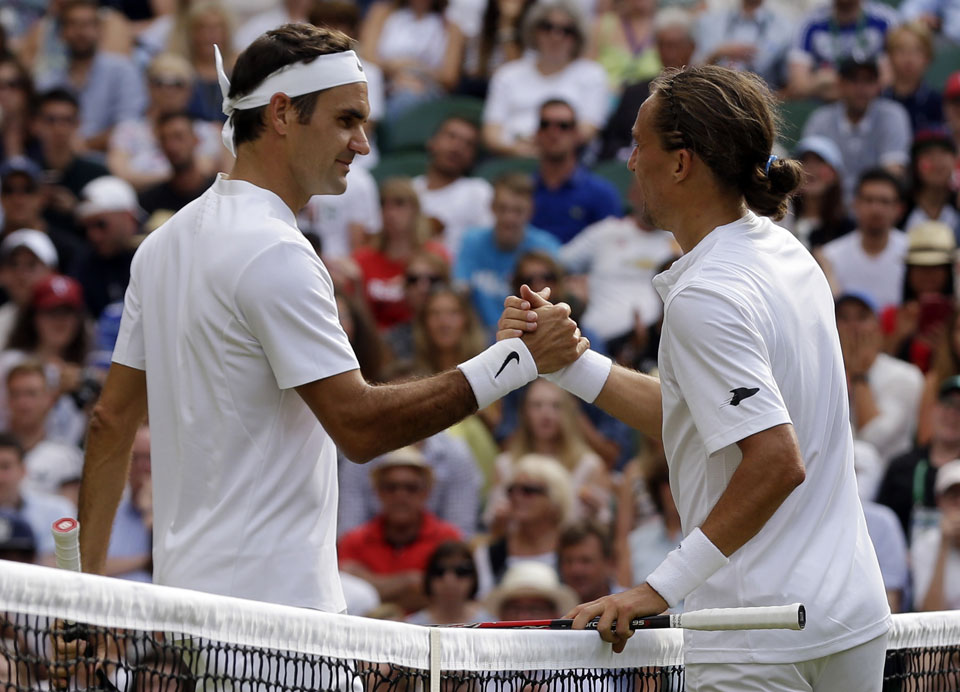 LONDON, July 5: Novak Djokovic's first-round match at Wimbledon lasted all of 40 minutes Tuesday. Roger Federer's, which was next in the All England Club's main stadium, went 43.

When two of tennis' biggest stars crossed paths after both advanced when opponents stopped playing because of pre-existing injuries, they kidded each other about a way to try to make it up to the fans.

"We had a little joke about it in the locker room," Djokovic recounted, "saying we should maybe play a practice set on the Centre Court, have the crowd stay."

The short workdays for the two were quite similar. Djokovic led 6-3, 2-0 when Martin Klizan retired with a left leg problem that has bothered him for about two months; Federer was ahead 6-3, 3-0 when Alexandr Dolgopolov quit because of a painful right ankle he first twisted last month.

Those still go into the books as wins, allowing Federer to collect his 85th at Wimbledon, breaking a tie with Jimmy Connors for the most in the Open era. Djokovic picked up his 234th match victory at all majors, moving ahead of Connors and alone into second place in history, behind only Federer's 315.

But the way the afternoon went meant Centre Court spectators who paid 56 pounds (more than $70) per ticket, some of them waiting in line for hours, got only brief glimpses of seven-time champion Federer or three-time champion Djokovic. They did, however, have the opportunity to watch a pair of top women, current No. 1 Angelique Kerber and former No. 1 Caroline Wozniacki, win full-length matches.

"I feel for the crowd. They're there to watch good tennis. Proper tennis. At least they see the two of us, who gave it all they had. They saw other players that tried, at least," Federer said. "It's unfortunate that it happened."

Two other men also stopped mid-match Tuesday, 19th-seeded Feliciano Lopez (left foot) and Janko Tipsarevic (right leg), bringing the first-round retirement total to seven. That equals 2008 for the most by men in the first round during the 50 editions of Wimbledon in the Open era.

It sparked discussion about whether Grand Slam tournaments should change their rules to allow players to still receive prize money if they withdraw before an event. That's a system being employed on a trial basis this season on the ATP Tour — which doesn't run majors — and lets someone who lost in qualifying take the spot in the main draw of an injured player.

The theory behind that setup: Players who are injured won't step on court simply to collect their prize money as an entrant, before calling it a day without finishing the match.

"Even if I had a torn muscle today, and the doctor says, 'You shouldn't go on court, you have serious damage to risk,' I could have faked it, stayed there for two less games, and still picked up the paycheck," said Tipsarevic, who stopped while trailing 5-0 after only 12 minutes against Jared Donaldson of the U.S.

Tipsarevic, Dolgopolov, Djokovic and Federer all said they would like to see the majors follow the ATP's lead.

"A player should not go on court if he knows he (can) not finish. The question is: Did they truly believe they were going to finish? If they did, I think it's OK that they walk on court. Otherwise, I feel they should give up the spot," Federer said. "The ATP has adjusted its rule, but maybe the Slams should ... look at what they could do for the players to make it just a little bit easier."

At Centre Court on Tuesday, Federer and Djokovic had an easy go of things. Kerber, last year's runner-up to Serena Williams at the All England Club, had more to do to get past Irina Falconi of the U.S. 6-4, 6-4, and Wozniacki, a two-time U.S. Open finalist, needed three full sets to edge Timea Babos 6-4, 4-6, 6-1.

But it was the short men's matches that had everyone talking.

"If it's just excruciating pain, OK, you can't play. If something is tweaked here or there and you feel like you can give it a decent go without hurting yourself, I think they should stay out there and I think you owe it to the fans," said 23rd-seeded John Isner, who beat Taylor Fritz 6-4, 7-6 (3), 6-3 in an all-American matchup on Court 14. "I know the Wimbledon Centre Court didn't get their money's worth today, that's for sure."

Collette Sherratt, 54, a spectator who traveled from Manchester, England, to attend the tournament for the first time, sure felt that way.

"I've been watching Wimbledon (on TV) for 42 years, and it's been on my bucket list to come here," Sherratt said. "I was absolutely thrilled that (I) was going to be on Centre Court, and then for that to happen, it was like, 'I might never get to come here again.'"

The constitution has been vindicated
18 hours ago

Our most vulnerable need protection during the pandemic. We can then celebrate the constitution
18 hours ago

VOX POP: People say constitution turns out to be mere sheet of paper due to lack of implementation
5 hours ago

I will not involve in corruption, and I won’t let others to do so: PM Oli
13 hours ago