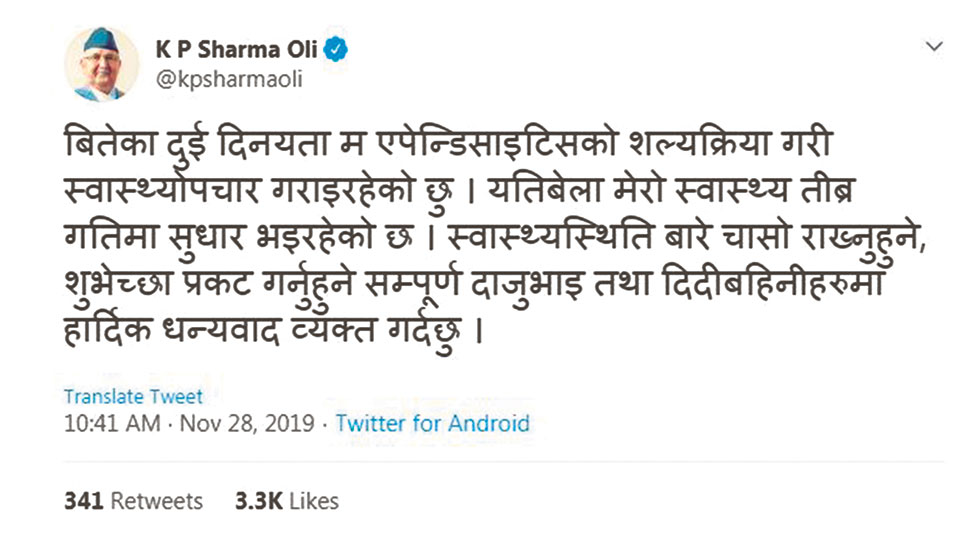 In his first tweet since Monday, Oli also thanked the nation for expressing concerns over his health and wishing him speedy recovery.

“For the past two days I have been receiving treatment after undergoing appendicitis surgery. There has been fast recovery in my health.   I’d like to thank all the brothers and sisters who showed concerns about my health status and wished for my speedy recovery,” the prime minister tweeted on Thursday morning.

Oli had also replied to a few tweets wishing him speedy recovery.

Oli, a kidney patient under dialysis regimen, underwent a surgery on Tuesday after he was diagnosed with abdomen infection due to appendicitis burst. He has been kept in the intensive care unit of the hospital under supervision of a team of expert doctors.

In a press statement issued on Thursday morning, the hospital echoed Oli, stating that there has been significant recovery in prime minister’s health.

On Thursday afternoon, Oli had also briefly strolled around the hospital and talked with his aides. In views of his improving health, doctors are discussing to keep him under normal care, according to his aides.

Sources said that Oli is unlikely to return to active duty for at least two weeks based on suggestion of doctors.