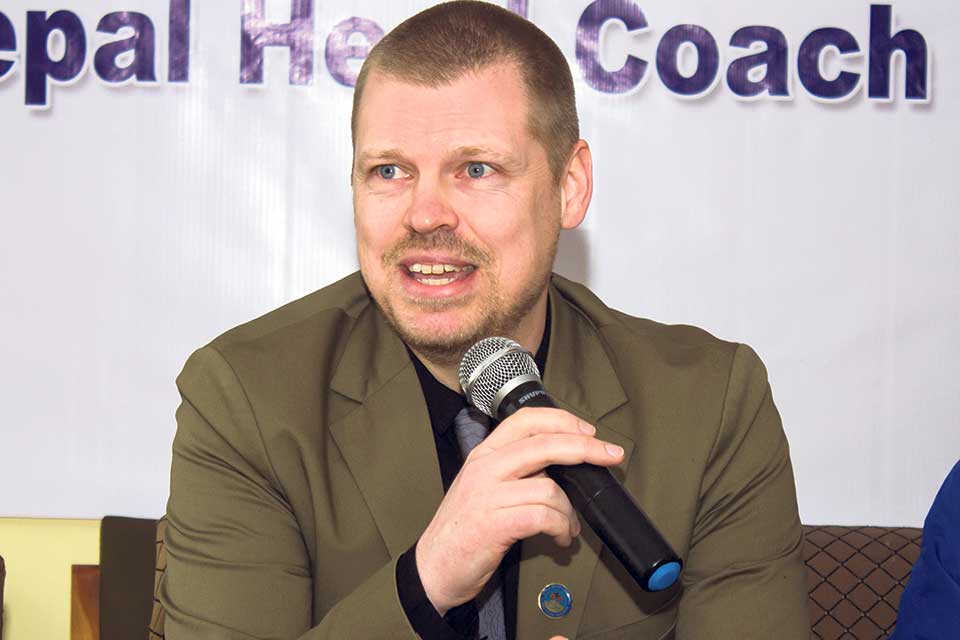 In the first press meet after his appointment, organized at the All Nepal Football Association (ANFA) head quarters, Kalin said that he will develop the standard of Nepali football with cooperation from the domestic coaches of Nepal.

Swedish national Kalin, whom the ANFA Working Committee on January 17 had appointed as the head coach of Nepal for two years, pointed out on the importance of grassroots football to develop the standard of Nepali football.

He added that it was a moment of happiness for him to be re-assigned as a coach in Nepali football. He earlier served as the head coach for Macchindra Football Club guiding the team to second place in the Martyr’s Memorial A-Division League in 2014.

“Returning to Nepal is a moment of happiness to me,” Kalin said, “I feel honored to have been given the responsibility of the head coach for the Nepal national team. I am familiar with the country and the sport here, so it will be easier for me to work.”

After guiding a team like Machhindra to second-place finish in the league, Kalin was praised a lot for his tactics.

Kalin will make his managerial national team debut in a friendly match against Malaysia on March 26. The date and the venue for the match have not been announced yet.

Kalin said that he will make a good start with his first international match of Nepal.

Kalin said that he will cooperate with the domestic coaches soon, taking the upcoming SAFF Championship as a major opportunity for the development of Nepali football. “Our South Asian rival India has progressed a lot in international football,” Kalin said, “India is the major challenger for Nepal at the SAFF. My main goal will be to play well against them in the upcoming SAFF.”

Kalin further added that even though the targets of his leadership have not been discussed yet with the ANFA, they have held discussions on several subjects on the development of Nepali football.

Kalin’s salary and perks have not been unveiled yet by the ANFA for his two-year contract. ANFA President Karma Tshering Sherpa said that the wages could not be made public now as Kalin’s process for work permit has just been started.

“We have already written to the National Sports Council (NSC) for the salary and process of work permit for the coach,” ANFA President Sherpa said, “That will take a long time as the process will go to The Ministry of Youth and Sports, Home Ministry, Department of Foreign Employment and so on. So, we cannot talk about the contract details now.”

Will Nepal’s new football coach Kalin be able to deliver?

A bunch of international coaches have failed in the past ... Read More...

Accept the truth
2 hours ago

43 more COVID-19 patients recover in Birgunj, no patient in Narayani Hospital
10 hours ago