'I enjoyed every bit of Nepal visit': Indian Prez 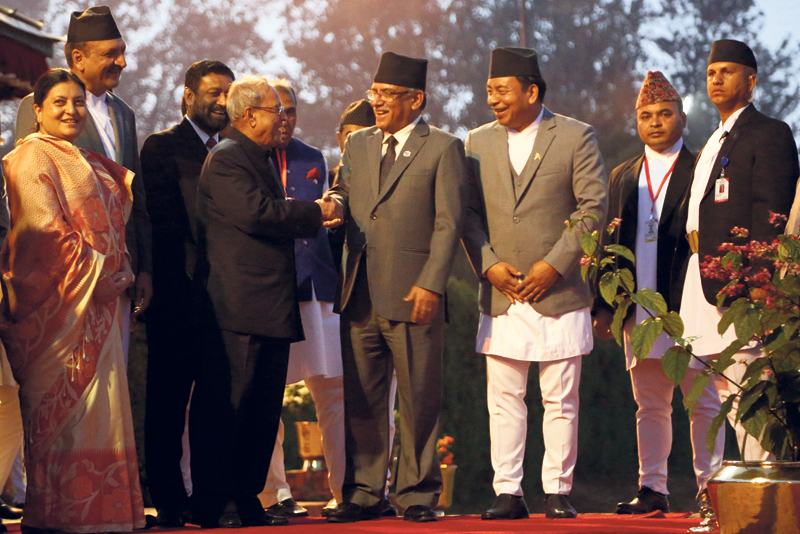 President Bidya Bhandari and Prime Minister Pushpa Kamal Dahal among other officials see off Indian President Pranab Mukherjee at the Tribhuvan International Airport before he left for New Delhi after wrapping up his three-day state visit to Nepal on Friday. Photo Courtesy: Dipesh Shrestha/Republica

Indian President Mukherjee flew to New Delhi upon his return from Pokhara.

Minister for Foreign Affairs Mahat informed that Indian President Mukherjee told him that he enjoyed every bit of his Nepal visit.

"The Indian president said he was very happy to have visited Nepal and said that 'I enjoyed every bit of my Nepal visit,'" Minister for Foreign Affairs Prakash Sharan Mahat quoted Indian President Mukherjee as saying to President Bhandari as he returned to New Delhi.

A cabinet meeting held on Friday afternoon also concluded that the Indian president's visit to Nepal was also highly successful as the visit has been able to build further trust between the two neighboring countries, informed the Minister for Foreign Affairs.

Earlier, before flying to Pokhara on the last day of his state visit, Mukherjee, leading a 60-member delegation, had flown to Janakpur from Kathmandu to visit the Ram Janaki Temple where he offered special worship. He also announced support of the Indian government for construction of two inns and a ring-road in Janakpur.

During the first two days of his state visit, Indian President Mukherjee had held talks with the president, vice-president, prime minister and senior leaders of various political parties and discussed wide range of bilateral issues and political affairs of Nepal. His main stress during the meetings was on amending the new constitution by accommodating aspirations of various political parties as far as possible.

It was after a gap of 18 years that an Indian president visited Nepal and Mukherjee's visit was mainly a goodwill visit. The last Indian president to visit Nepal was KR Narayanan, who came here in May 1998.

Likewise, he also visited the Pashupatinath Temple and offered worship. He was also conferred an honorary doctorate degree by Kathmandu University and attended a civic reception hosted by the Kathmandu Metropolitan City Office in his honor.

The government had made heavy security arrangements during his state visit.