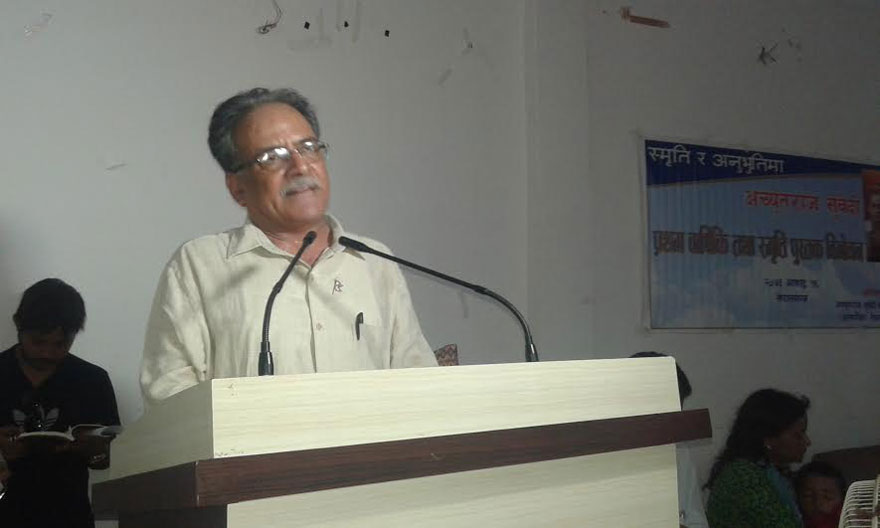 NEPALGUNJ, June 30: CPN (Maoist Center) Chairman Pushpa Kamal Dahal on Thursday said that he is ready to take the helm of new government if the major parties Nepali Congress (NC) and CPN-UML lend him support.

Speaking at a program organized  here in Nepalgunj to mark the first death anniversary of Achyut Raj Subedi, son of Maoist politburo member and former Constituent Assembly Chairman Purna Subedi, Chairman Dahal said, “I do not disagree if the national government is formed under the leadership of CPN-UML or Nepali Congress President Sher Bahadur Deuba. If it is not possible, CPN (Maoist Center) is ready to take the helm of the government as it is the major stakeholder of the peace process.”

Releasing a memorial book on the occasion, Dahal stressed on the need to form a national unity government to implement the newly promulgated constitution and to bail the country out of the present political quagmire.

Dahal further said that the crisis the country is currently facing can only be sorted out through the national unity and consensus.

Meanwhile, Dahal also pointed out the danger that the country is likely to face unless the favorable circumstances are created to implement the constitution by mid-January 2018.

He warned that the country might plunge into civil war once again unless the parties are serious about the present political crisis and maintain maximum flexibility.

Even though the devastating earthquake last year claimed thousands of lives and properties, it brought, to a great extent, all the political parties together, Dahal added.

NC is ready to extend constructive support to the govt, says leader Gachchhadar

Aanchal Kunwar is new MD of Daraz
12 hours ago

Issues of Public Procurement in Nepal
20 hours ago

Lalitpur DAO suspends all but essential services
9 hours ago
Residents can install EVs charging units for their personal use: NEA
7 hours ago