KATHMANDU, August 13: The fresh smell of grass rose off the soil on a recent morning as Chandra Praja walked out of his house in a rural village of Makwanpur. The smell was accompanied by a greener view, a sight very new to the area. “This is the greenest this surrounding has ever been. Before this, everything was dry and barren. It seems like good faith is coming this way,” Praja, the chairman of ward 5 of Rakshirang Rural Municipality in Makwanpur, said over the phone.

For years, Praja’s village with a majority of Chepang community has lived with dry and dreary surroundings. An ethnic minority, Chepangs are a group of people mainly inhabiting the rocky ridges of the Himalayan range in central Nepal.

Just 28 kilometers east of Hetauda, the headquarters of Makwanpur, Rakshirang Rural Municipality is home to one of the largest Chepang settlements in the district. Till this day, a large number of Chepangs are living semi-nomadic lives below the acute poverty line.

Now however, the circumstances are changing, at least in Praja’s village and Praja along with the other villagers credit this to a recent project carried out by Bighnaharta Nepal, an organization working to uplift rural communities and households across the nation.

With the motive to battle acute poverty prevailing in the Chepang community through cash crop plantation, the project has so far transformed the lives of many Chepang families within just a few months.

According to Gomesh Singh Upreti, the president of the organization, the project named as ‘Social-entrepreneurship development of marginalized Chepang community through cash crop plantation’, targets to battle acute poverty in the community by encouraging them to plant crops such as Broom Grass (ambriso) and Bamboo. “After the crop is harvested, the organization also trains the Chepangs to make products out of the grown crops. Subsequent to that we will help them find a suitable market for their products through which the households will be able to earn a steady income,” he said, “The benefit is all theirs; we (the organization members ) are just trying to be the catalyst in helping them become self-sustained and empowered.”

The project started a year ago in ward 5 and ward 7 of the rural municipality and by now the results have been remarkable claims Praja, who seemed the happiest to talk about the project that has already shown signs of uplifting his marginalized community. 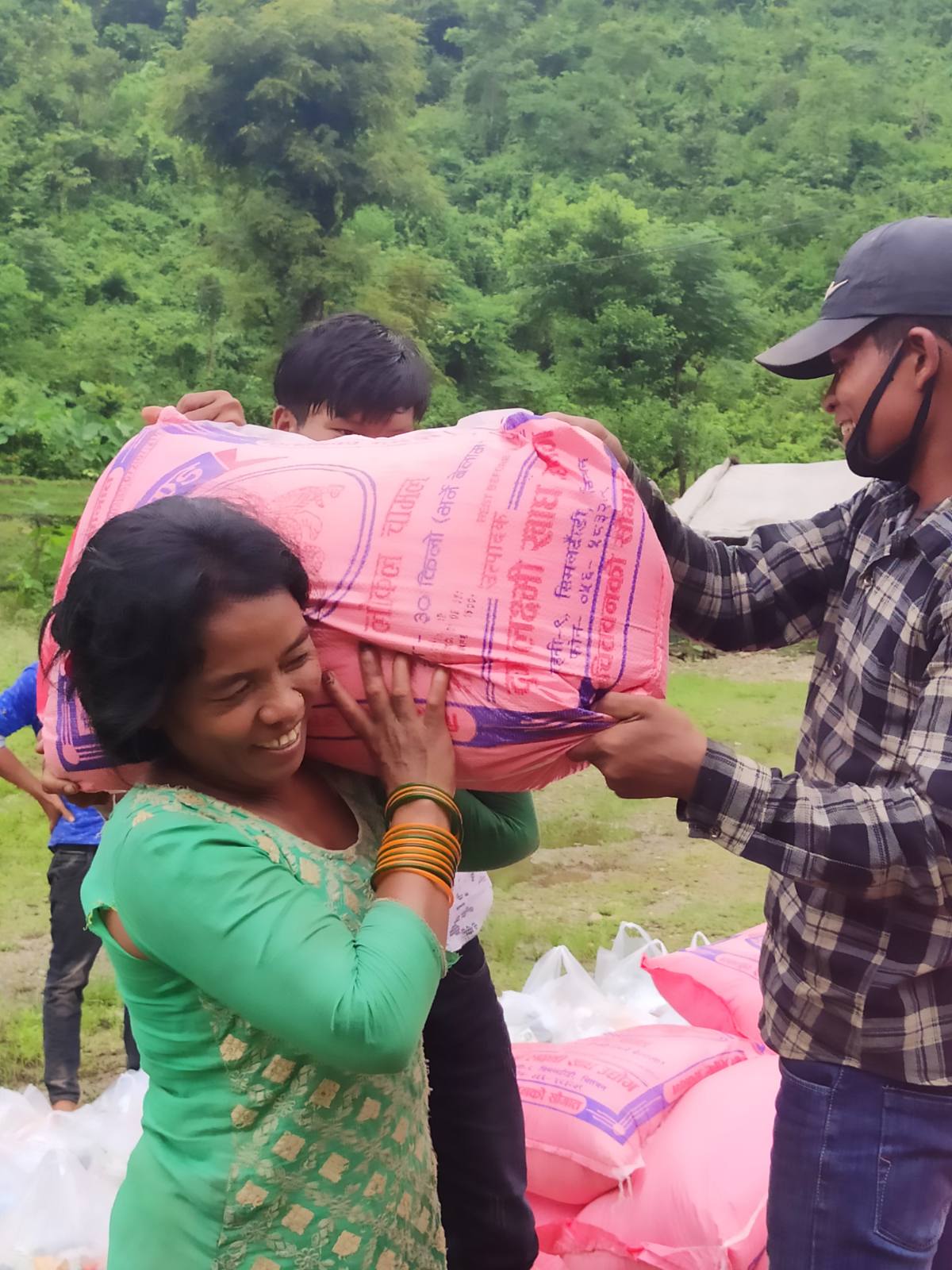 “As of now, a total of 510 households from two rural municipalities have been involved in the project,” said Upreti.

The project was carried out in four different phases: Plantation, Distribution of Incentives, Training and Marketing.

The second phase included distribution of incentives to the Chepangs. “As an incentive for the plantation, the organization had promised to provide 30 Kg of Rice, five Kg lentils, two ltrs cooking oil, one Kg salt, five pieces of soaps to every household,” said Upreti, adding, “As promised, we recently completed  the distributing the incentives to them in July”.

The third and fourth phases will include training and marketing where the Chepangs will be trained to make products such as brooms, doko, ropes etc from the broom grass plants projected to harvest in September-November this year. They will also be taught to manage the wastes from the process that can be made into fodder for goats, cows and buffalos.

After making the products, the organization will link the community to national and international markets to sell their products for them to fully enjoy their profits.

Upreti mentioned that a broom is sold for a minimum of Rs100 and a single household can easily make more than 30-50 broom sticks in a single day. “Even if they can manage to sell the brooms for a minimum price, they can easily get good profits, at least an amount that will pull them above the poverty line,” Upreti believes.

“In addition to the above-mentioned benefits, the best thing about the project is that the plantation is carried out on community lands, most of which were almost dull before the project was initiated,” said Tul Bahadur Praja, ward chairperson of ward no.7 of Rakshirang Rural Municipality.

According to both Chandra and Tul Bahdur Praja, they had almost lost hopes of seeing a greener village as the soil across the areas has always remained dry, insipid and unfertile.

“As a consequence of dry and barren land, calamities like landslides and soil erosion occurred every year. We had lost our hopes to see a greener and healthier village,” shared Tul Bahadur.

However he believes that the project has restored their faith and the village is gradually turning greener with budding views of broom grass and bamboo plants in areas that were almost dead before. “In just a few months, there’s greenery everywhere,” he said.

According to Upreti, initially, the soil was extremely tarnished which compelled them to give up hopes of planting food crops. That is why the organization had to perform a thorough research on plants and their suitable areas for plantation. “That is when we came to know about the broom grass and the wide range of benefits it carries,” said Upreti.

As the president of the organization and someone who initiated the project, Upreti explained that he was motivated by the ‘Hariyo ban project’ carried out by the Department of Forest a few years back in association with the World Wide Fund for Nature (WWF) and USAID Nepal. The project was initiated under Ram Babu Paudel, former district forest officer of Kathmandu, Tanahun and Palpa districts.

“Amriso is easy to plant as it can adjust to any type of land and doesn’t require enough care or nourishment after it is planted,” he said. A single broom grass plant has a potential to multiply into a wider area covering a huge surface and also stabilizes slopes preventing landslides. It can also help to reduce the growth of invasive plant species.

In addition to that, the waste produced from the grass during the process of turning it into a broom can be used as fodder for livestock.

“The benefits don't limit here as there is a high demand for brooms and similar goods made of the plant in the market,” said Paudel.

“I’m sure the Chepang communities in Makwanpur will have similar benefits to enjoy in the coming years,” he said.

However, Upreti claims that initially the project wasn’t welcomed by people with their arms wide open. But, he made constant efforts to portray the motive of the project making repetitive visits at the ward offices. “For almost one and a half years, I made constant visits to the ward offices, pitching my idea to representatives from the respective areas,” he said, “Finally, the idea was accepted only after repeated rejections.”

After constant struggle to convince people about the project, now the project is also helped by JTI foundation, a Swiss organization typically focused on supporting disaster management programs around the world.

Upreti’s organization is now a prolific organization, but he explains about his initial days and how his days were dark and lonely.

“In January of 2016, when I was working on one of the projects in a village of Sindupalchowk, I got a call from a local of a village in Makwanpur. The person who had called requested me and my organization to send help to the site where eight Chepang people were killed due to a fire break-out,” he said.

Desperately seeking warmth amidst the hills, the victims had slept outside of their houses, around the fire they had set in dry straws that they believed would provide heat. However, fueled by high wind and low humidity, the fire that lit throughout the night eventually killed the family.

On reaching the site to provide help, Upreti saw children who stayed hungry for multiple days and teen age girls who had 4-5 kids.

A19-year-old Chepang girl he saw there was already a mother of five children and was single handedly looking after them.

‘He left me’ she replied.

To this day, as Upreti describes, the scene still happens to be the most jolting scene he has witnessed in his life.

Little did he know that this would eventually change the directions he was walking in his life and would encourage Upreti, who is a graduate of aviation management to spend multiple years of his life in the social service sector, helping the unprivileged and marginalized people.

“What a difference a single incident can make,” Upreti recalled moments, talking to Republica.

Shortly after the incident, he formed an organization all by himself with the motive to bring changes in the rural corners across the nation.

“I started it all alone but gradually some friends started joining me. Today my organization is a strong organization with six other active members, and support from few other organizations,” he said.

Meanwhile, Chandra Praja and Tul Bahadur Praja mention that a few other ward representatives from other wards across the district have also liked the project and are planning to initiate similar projects in their wards. “I hope the organization plans to spread this to other villages across the district. This is the best way to empower the people of our community,” said Tul Bahadur. 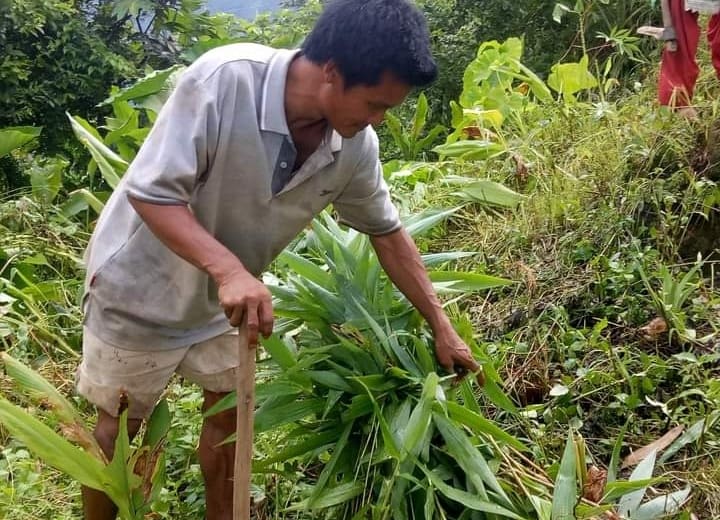 Women are like roses, soft, delicate and beautiful. Yet, they are strong, amazing and wonderful. Women have warm hearts that... Read More...

46 dead, 16 hospitalized after trailer of migrants found
20 minutes ago
Stockbrokers permitted to operate their own TMS for online trading of shares
2 hours ago