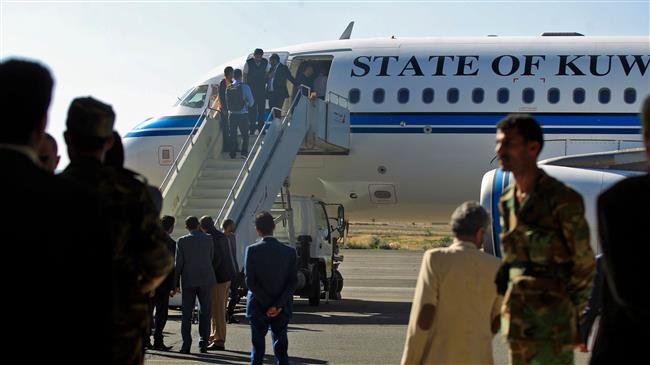 SANAA, Dec 5: Delegates from the Houthi Ansarullah movement, escorted by United Nations Envoy to Yemen Martin Griffiths, have flown from the Yemeni capital city of Sana’a to Sweden to attend UN-sponsored peace negotiations with representatives from the administration of former Yemeni president Abd Rabbuh Mansur Hadi.

The Houthis left aboard a Kuwaiti airliner on Tuesday, one day after 50 wounded fellow fighters were allowed to fly to neighboring Oman for treatment in a major boost to peace efforts.

An unnamed senior United Nations official said Griffiths offered to accompany the Ansarullah delegates after they voiced fears that the Saudi-led military coalition, which has imposed an aerial blockade on Yemen and is conducting a devastating aerial bombardment campaign against the impoverished Arab country, might intercept the flight.

Mohammed Abdul-Salam, the spokesman and chief negotiator for the Ansarullah movement, wrote on his official Twitter page that the Houthis “will spare no effort to make a success of the talks to restore peace and end the aggression.”

Ansarullah officials said that preliminary consultations with Saudi-backed Hadi loyalists could begin as early as Wednesday.

Although no date has been announced for the start of the talks, there are reports they could begin on Thursday.

Britain has presented a draft UN Security Council resolution on Yemen, and called on parties involved in Yemen’s crisis to restart peace negotiations.

“The conflict in Yemen can only be resolved though an inclusive political process,” the draft resolution said.

The draft sets a two-week deadline for warring Yemeni parties to remove all barriers to humanitarian aid, halt attacks on civilian areas and allow unhindered access to the strategic port city of Hudaydah.

Also on Tuesday, tens of Saudi-backed militiamen after Yemeni army troopers, supported by allied fighters from Popular Committees, thwarted their offensive on al-Qatab area in the Nihm district of Yemen’s province of Sana’a.

Moreover, a young girl lost her life after Saudi military forces and their mercenaries targeted residential buildings in the al-Durayhimi district of the western Yemeni province of Hudaydah with a barrage of artillery rounds and mortar shells.

Saudi Arabia and a number of its regional allies launched a devastating military campaign against Yemen in March 2015, with the aim of bringing the government of Hadi back to power and crushing Ansarullah movement.

According to a new report by the Armed Conflict Location and Event Data Project (ACLED), a nonprofit conflict-research organization, the Saudi-led war has so far claimed the lives of around 56,000 Yemenis.

The Saudi-led war has also taken a heavy toll on the country’s infrastructure, destroying hospitals, schools, and factories. The UN has already said that a record 22.2 million Yemenis are in dire need of food, including 8.4 million threatened by severe hunger. According to the world body, Yemen is suffering from the most severe famine in more than 100 years.

A number of Western countries, the US and Britain in particular, are also accused of being complicit in the ongoing aggression as they supply the Riyadh regime with advanced weapons and military equipment as well as logistical and intelligence assistance.