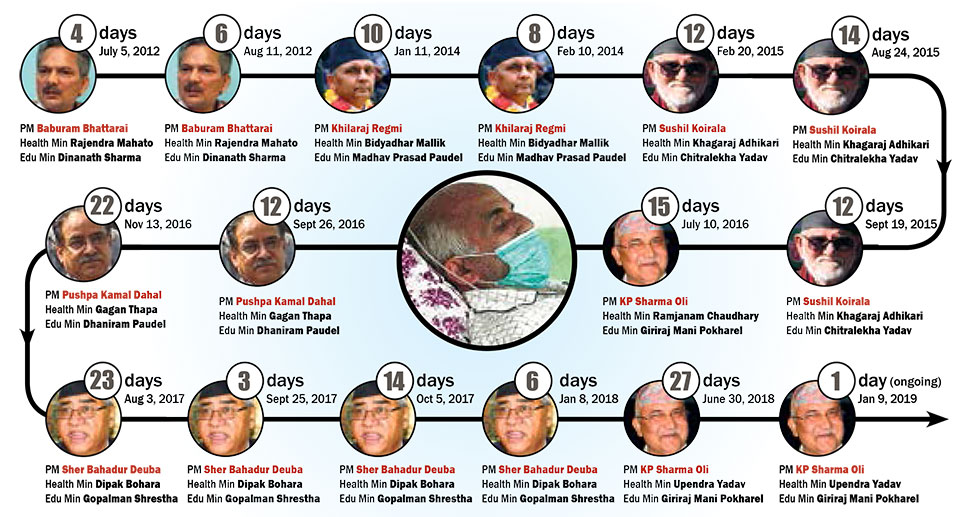 KATHMANDU, Jan10: Paving the way for the B & C Medical College owned by Durga Prasai and Manmohan Medical College owned by Rajendra Pandey to start operations, the Education and Health Committee of parliament approved the National Medical Education Bill on Wednesday. The bill flouts the agreement signed with Dr Govinda KC, senior orthopedic surgeon and crusader for medical education reform in Nepal.

The National Medical Education Bill permits those holding letters of intent (LOI) issued by Kathmandu University or Tribhuvan University to open medical colleges outside Kathmandu Valley. The bill does not include the Mathema report in its preamble nor does it mention any deadline for phasing out the CTEVT intermediate levels in medical education or opening a new medical university. It is learned that there are 16 proposed colleges including B&C and Manmohan Medical which have already received LOI from the government.

Demanding implementation of the agreement signed by the government with Dr KC, lawmakers from the opposition Nepali Congress party registered a note of dissent against the bill.

“The government intends to allow LOI holders to open medical colleges outside Kathmandu Valley with affiliation from Tribhuvan University or Kathmandu University. These two universities have already issued more than five affiliations each while the bill proposed had provisioned not to allow a university to issue more than five medical college affiliations,” Thapa said. “The Bill has provisioned for new medical colleges as well as the old ones to be non-profit entities but the LOI holders will turn into non-profit companies only within 10 years. This is objectionable because the law must give equal treatment to all,” he added.

However, lawmaker from ruling Nepal Communist Party Yogesh Bhattarai claimed that the agreement signed with Dr KC has been accommodated in the new bill. “It is Dr KC’s win also,” said Bhattarai. “Parliament has the right to follow its procedures for preparing and endorsing bills. Not all agreements can be adopted as they are because of the technicalities of the law,” he added.

Jayapuri Gharti, chairperson of the Education and Health Committee of parliament, said that the bill was finalized through a vote after failing to garner consensus support. “The National Medical Education Bill will be tabled in parliament soon for final discussions and endorsement,” she added.

The communist party government has been widely criticized for ushering in private investment in health and education. It is reported that CPN Co-Chair Pushpa Kamal Dahal has a huge shake in the Jhapa-based B&C Medical College while leaders and cadres of the then CPN-UML are shareholders of the Kathmandu-based Manmohan Medical College. However, Manmohan Medical can be shifted outside the Valley after the new law kicks in.

Meanwhile, Dr KC has begun a 16th fast-unto-death in Ilam from Wednesday, demanding implementation without alteration of the agreement signed with him.