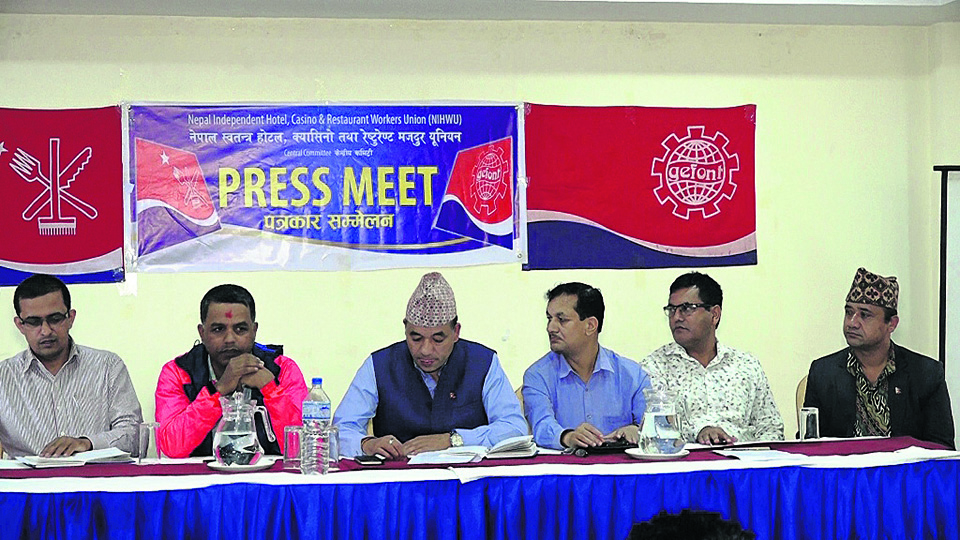 Workers threaten protest on the eve of Visit Nepal Year

KATHMANDU, Oct 1: Hotel, casino and restaurant workers have given a 21-day ultimatum to the government on Monday, demanding the implementation of 10 percent service charge and Labor Act.

Holding a press meet in Kathmandu, Nepal Independent Hotel, Casino and Restaurant Workers’ Union (NIHWU) said that the workers legally entitled to 10 percent service charge have not been receiving the amount, and if their demands were not met, they would start protests on the eve of Visit Nepal Year.

Surya Bahadur Kunwar, chairman of NIHWU drew the attention of the government to immediately implement Labor Act and contribution-based social security plan. Speaking on the occasion, he presented a five-point demand and called for immediate action on it. If the demands were not met, the workers have warned the government to stop the operation of service-providing tourism sector.

A press statement issued by the NIHWU stated that some casinos are operating and some have shut down. “The casinos that are no longer in operation have not paid the salary and compensation to the workers,” the statement read, “The workers are now unemployed.” The NIHWU has requested the casinos to legally operate and assure 10 percent service charge to the workers. The service charge has been legally accepted and restaurants, catering services, fast food and other tourism areas are imposing service charge, according to the statement.

The union on Monday asked the government to have a management body representing workers involved in tourism sector to successfully celebrate 2020 as the Visit Nepal Year.

The protests, if carried out, are expected to hamper the government announced campaign Visit Nepal Year 2020.

At War With a Virus
17 hours ago

PM under pressure to probe medical procurement deal
19 hours ago

Australia's tour of Bangladesh postponed due to coronavirus
7 hours ago

IN PICS: Rhododendron forest remains silent amid COVID-19 lockdown in Panchthar
8 hours ago

Sub-Saharan Africa to fall into recession in 2020, says World Bank
14 hours ago