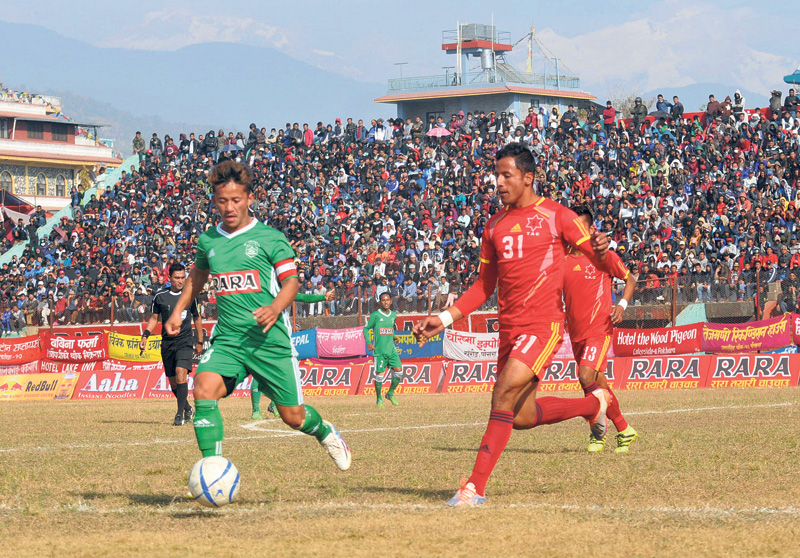 Players of Sahara Club (L) an Tribhuvan Army Club in action during their match of the 15th Aaha-Rara Gold Cup Football Tournament at the Pokhara Stadium in Kaski, Pokhara on Wednesday . Photo Courtesy: Sudarshan Ranjit

Sahara meets the winner among MMC and Sankata in final
POKHARA, Jan 26: Host Sahara Club has inched closer to the title of the Aaha-Rara Gold Cup Football Tournament on Wednesday after stunning Tribhuvan Army Club 4-3 in tiebreaker at the Pokhara Stadium in Pokhara, Kaski.

Host, the champion of the 12th edition, also avenged the defeat faced at the hands of the same opponent in last year's semifinal. Sahara, which made it to the final for the third time, will take on the winner among Laxmi Hyundai Manang Marshyangdi Club and CMG Club Sankata in the summit clash on Saturday.

The fate of the winner was decided through tiebreaker after the regulation time and added 30 minutes finished in a goalless draw. Only three players converted from spots for the departmental team including Jeetendra Karki, Santosh Tamang and Deep Kumar Lama while Deepak Gurung and Bikesh Kutu missed the target. Deepak hit high above the bar while goalie Bikesh was denied by his Sahara counterpart Sujit Gurung. The glovesman of the winning team was declared the man-of-the-match.

Sushan Gurung, Shiva Subedi, Pradeep Gurung, and Uttam Gurung converted for the home team while Laxman GC was prevented by custodian Kutu. Sahara's African recruit Boby was sent off in the last moment of the additional time after a foul on Army striker Bharat Khawas.

Yet to be crowned the champion, the three-time finalist Army's quest for the title remained unfulfilled after some of its powerful attempts ended at the hands of goalie Sujit.

Sahara custodian Sujit made a fingertip save to deny Deepak's long range scorcher for Army in the 29th minute. He again denied a powerful strike of Deep Kumar Lama in the first half injury time. Moments later he again denied Santosh Tamang's freekick. Army was unfortunate in the 67th minute after Tek Bahadur Budathoki's strike rebounded crashing on the custodian's feet.

Army piled more pressure after the break but came under pressure in the additional time after failing to score. Sahara could not create remarkable chances in the match. Uttam Gurung's 16 minute strike for home team sailed high above the bar while Army goalie made a brilliant save to deny Bikesh Kuthu in the last ditch of the regulation time play.

Sahara coach Kiran Shrestha said that his side secured final berth after they resorted to safe play. “We chose to play defensive game as we had planned to take the match to tiebreaker,” he said. “Our team also has less experienced players thus we did not wanted to take risk,” he said.