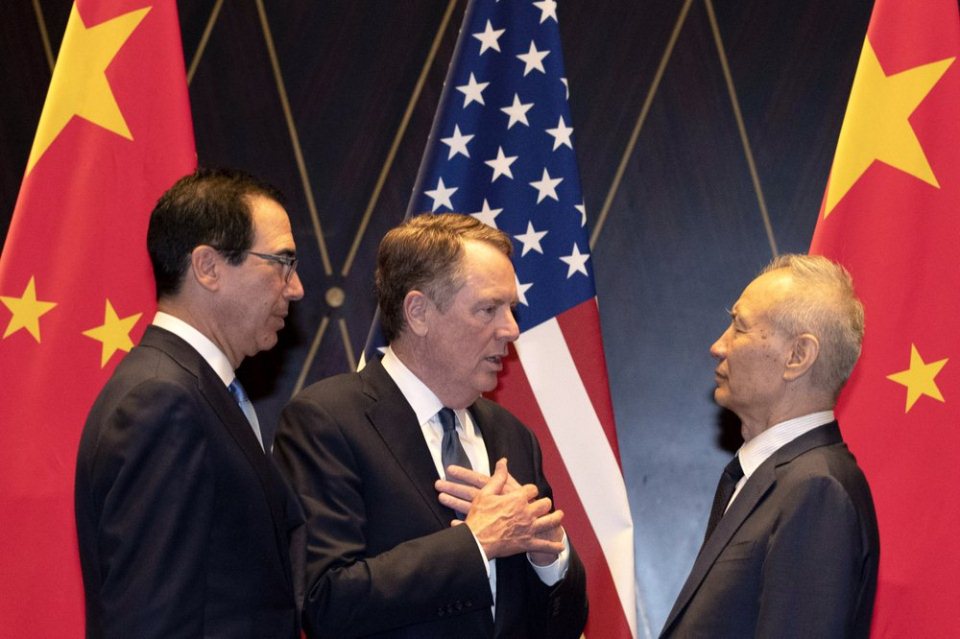 FILE - In this July 31, 2019, file photo U.S. Trade Representative Robert Lighthizer, center, gestures as he chats with Chinese Vice Premier Liu He, at right with Treasury Secretary Steven Mnuchin, left, looking on after posing for a family photo at the Xijiao Conference Center in Shanghai. The 13th round of U.S.-China trade negotiations is set to begin Thursday, Oct. 10 in Washington. (AP Photo/Ng Han Guan, Pool, File)

WASHINGTON, Oct 9: President Donald Trump and China’s Xi Jinping have plenty of reasons to call off their trade war. Both face weakening economies that would likely further deteriorate if their conflict escalates.

Both are up against a formidable adversary that shows no inclination to yield. Both are tangled in political turmoil — Trump with impeachment proceedings, Xi with angry protests in Hong Kong. Both, in short, would welcome some good news.

Yet the 13th round of U.S.-China trade negotiations, set to begin Thursday in Washington, is unlikely to prove any more successful than the previous 12 in resolving tensions that have rattled markets, threatened global growth and paralyzed business investment in the United States.

The issues that divide the world’s two biggest economies — mainly over allegations that Beijing deploys illicit tactics in a drive to acquire and develop cutting-edge technology — are likely too daunting to produce the kind of “big deal” that Trump says he wants. At least anytime soon.

The already slim prospects for success grew dimmer Monday when the U.S. Commerce Department blacklisted a group of Chinese tech companies. The Trump administration charges that facial recognition and artificial intelligence technology developed by those companies is being used to repress China’s Muslim minority. Beijing demanded that Commerce reverse the move.

The Chinese Commerce Ministry warned in a separate statement that Beijing will “take all necessary measures to resolutely safeguard Chinese interests” but gave no details of possible retaliation.

The U.S. stock market tumbled Tuesday — the Dow Jones Industrial Average dropped 314 points, or 1.2% — partly on diminishing hopes for an end to the trade war.

“Given the current level of hostility (and) distrust between the two sides, the possibility of negotiating a durable and broad deal seems quite remote,” said Eswar Prasad, a Cornell University economist who formerly led the China division at the International Monetary Fund.

The Trump administration last year accused China of using predatory tactics in its drive to develop global competitors in advanced technologies such as quantum computing and electric cars. The administration alleges, and many China analysts agree, that these tactics include stealing sensitive technology and forcing foreign companies to hand over trade secrets.

Trump has imposed tariffs on more than $360 billion worth of Chinese goods and plans to tax an additional $160 billion of imports on Dec. 15. This would extend U.S. tariffs to just about everything China ships to the United States.

“The U.S. has made very clear to China what sort of changes they need to make,” said Stephen Vaughn, a partner at the King &amp; Spalding law firm and former general counsel at the Office of the U.S. Trade Representative under Trump. “Our president is prepared to make a deal. But it’s got to be a deal that makes sense to us.”

Instead of yielding, China so far has counterpunched by taxing $120 billion in U.S. exports, notably soybeans and other farm goods that are critically important to Trump supporters in rural America.

As the trade war has dragged on for 15 months, economic damage has been inflicted on both sides of the Pacific.

The Chinese economy this year is expected to register its slowest growth since 1990.

In the United States, already struggling manufacturers are suffering from the higher costs that Trump’s tariffs have imposed on components from China and are paralyzed by uncertainty over whether, when and how the trade hostilities might end.

A private survey last week found that U.S. manufacturing output fell for a second straight month in September, reaching its lowest level since the recession year 2009.

“Recently some of the statements coming out of Beijing have been a little more positive,” Kudlow said on the Fox News Channel. “They’ve been in the market buying some agriculture commodities from the U.S. — soybeans, pork, and wheat and other things. That’s a good sign. The mood music — the psychology — seems to be a little better, so let’s see what they come up with.”

But analysts say Beijing is balking at the kind of meaningful policy reforms that might satisfy the administration. Doing so would mean scaling back its bold aspirations to become a technological superpower. It’s an ambition that China’s leadership regards as crucial to ensuring prosperity.

“There appears to be a fundamental disconnect in the stated goal of the two sides, with China looking for a mini deal and the Trump team talking about settling for only a comprehensive deal,” Prasad said.

The administration did forge a mini trade deal of sorts on Monday, when it signed an agreement with Japan that gives American farmers greater access to the Japanese market. But that deal delayed thornier issues, such as trade in autos, for a more comprehensive pact in the future.

The Trump administration and Beijing have previously agreed to short-term cease-fires, delaying tariff increases to buy time for more talks. But Dennis Yang, professor at the University of Virginia’s Darden School of Business, said he has spoken with Chinese business executives who are bracing for a lengthy battle.

“The business community has been prepared for more of a long-term fight,” Yang said. “They have had a long time — more than a year — to prepare for the imposition” of more U.S. tariffs.

“The expectation for a great deal is probably gone,” Yang said. “It would probably be too ambitious to achieve a deal for China to give up Made in China 2025 or its industrial policies. I think that never has been a realistic goal.”

Govt made extraordinary achievements in the past one year despite COVID-19 pandemic: PM Oli
9 hours ago