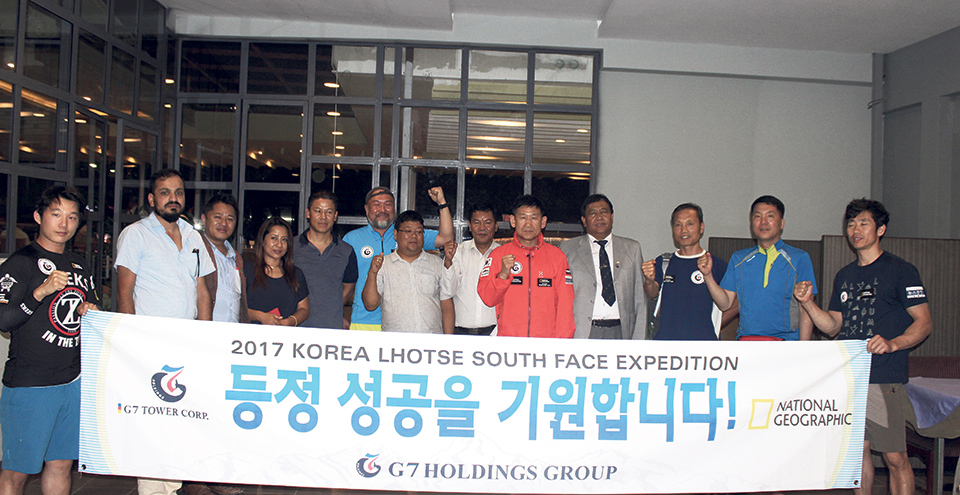 KATHMANDU, Sept 10: South Korean mountaineer Hong Sung-taek, who has attempted to summit Lhotse for four times, is going to attempt his fifth climb to the 8516-meters-high summit. For his fifth attempt he has headed toward the base camp of Lhotse on Saturday with his team of 14 members.

“I find Mount Everest a bit easier to climb than Lhotse,” Hong said: “Indeed, four unsuccessful attempt of summiting Lhotse has disappointed me, though I have decided to give another chance to myself and I am hopeful for a successful ascent.”

Hong has already successfully climbed 18 mountains of different countries including Annapurna and Dhaulagiri of Nepal.

He said foreigners come to climb the Mount Everest only, and no one dared to climb Lhotse, which has been considered tough to climb due to technical difficulties.

Hong has attempted to climb four times from the southern route of the Lhotse. As the route and the climate did not favor him, he had to return from half way of the summit, said Wangchu Sherpa, a member of mountaineering team and managing director of Trekking Camp Nepal.

Hong, who is also the team leader of the mountaineering team, is climbing to hold a record this time despite the technical difficulties.

Spanish mountaineer Egocheaga Jorge is also joining the mountaineering team. Mountaineer Jorge has already climbed Everest 14 times before this. According to Civil Aviation Authority Nepal, no mountaineer has successfully climbed the Lhotse from the southern route yet.

Although a Japanese team had attempted Lhotse before, however they were 41m far from the summit so CAAN said that it could not be registered as a successful ascent.

During the farewell ceremony of the team of Hong, NMA President Santa Bir Lama said: “It is not easy to climb Lhotse from southern route. Let’s hope this team of Korean and Spanish mountaineers will be able to do it, adding a new dimension in the mountaineering history.”

One killed, three injured in wild boar attack
44 minutes ago