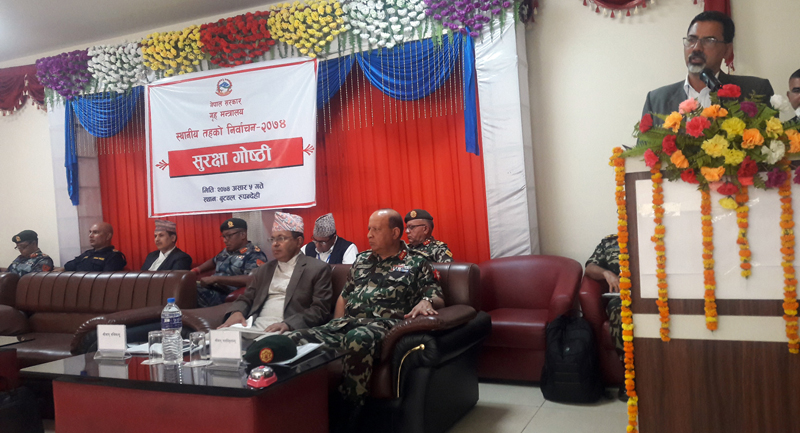 BUTWAL, June 19: Home Minister Janardan Sharma has said the government is committed to strengthen the security system so that the people can exercise their voting rights in a free and peaceful manner in the second-phase local election on June 28.

Addressing a press conference held in Butwal on Monday, he said, "Security action plans would be formulated and implemented in line with the security plan prepared by the Central Security Committee so that the people in all the districts can vote freely without any inhibitions."

Information has been received of some untoward incidents taking place in course of filing of nomination on Sunday for the second-phase elections in Bajura, Sankhuwasabha and Kapilbastu, the Home Minister said, adding that the bodies concerned have been directed to carry out necessary investigations into these incidents and book the perpetrators. He also stated that the bodies concerned have been instructed to remain alert so that such incidents do not repeat.

"The culprits of the Kapilbastu incident would soon be brought to book after conducting a thorough investigation into the incident," he said, adding that the local level election in Province 2 has been deferred to address the dissatisfactions of the Madhes-centric parties and to create an environment in which the people can cast votes in safe atmosphere by ending the long-term conflict.

The Home Minister had arrived in Butwal to participate in the security seminar organised by the Ministry of Home Affairs here today. The seminar was centred on the security condition in the district and the security strategy. He stated that the seminar concluded with a commitment to guaranteeing the people to ensure a situation in which people can exercise their franchise in an easy and secured manner.

Information officer at the Rupandehi District Administration Office, Bishnu Gyawali, said the seminar concluded with a resolve to creating an environment in which voters can cast votes in a free, fair and fear-free manner and the election is held in a peaceful and rigging-free manner by keeping intact the law and order.

The Chief District Officers, the chiefs of the administrations and the chiefs of the district-based Nepal Police, Armed Police Force, Nepalese Army and the National Investigation Department of Rupandehi, Kapilbastu, Nawalparasi, Palpa, Gulmi and Arghakhanchi districts participated in the seminar.