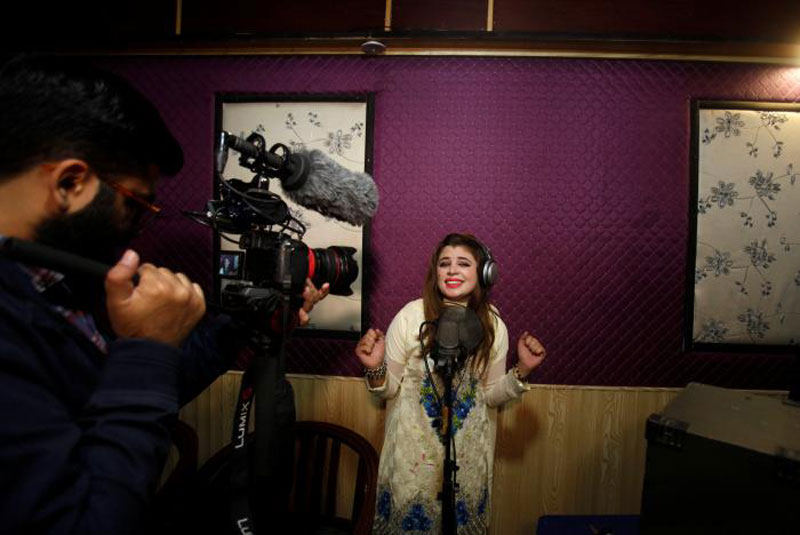 Malala Gul, a local singer, performs to record a song at a studio in Peshawar, Pakistan, January, 28, 2017/ Reuters

For years, violence kept most of Pakistan’s aspiring young musicians from following their dreams, whether the threat of Taliban militant attacks or gang wars in the crowded southern port city of Karachi.

Now, as law enforcement crackdowns slowly improve the security situation across the nation, some musicians are getting help from two-year old Pakistani start-up Patari, a music streaming and production company.

Both the startup and the musicians’ efforts are helping to carve out a new creative space for young people in Muslim-majority Pakistan, where those below 30 make up 60 percent of a population of almost 200 million.

Karachi rap ensemble Lyari Underground was once afraid of putting its music on Facebook, deterred by episodes of bloody gang war in the precinct of the same name that many Pakistanis consider the most dangerous in their largest city.

But the same violence has inspired many of the group’s songs, taking cues from the music of U.S. rapper Tupac Shakur, said its founder, who uses the name AnXiously.

“In a ghetto, rap exists naturally,” he added. “If there is no rap, then it is not a ghetto. Rap is a product of this reality and these surroundings.”

Band members said when they first heard the music of Tupac, although half a world away, it reminded them of their own experiences living with violence and poverty.

From streaming to producing
Launched in February 2015, Patari now boasts a library of 40,000 Pakistani songs and podcasts, and subscribers exceed half a million, said Chief Executive Khalid Bajwa.

Nearly 30 million of Pakistan’s people use the internet, mainly on mobile telephones, says digital rights organization Bytes for All.

The company’s latest initiative, Tabeer, or ‘Dream Come True’, pairs established artists with unknown musicians to produce six songs and music videos, completed on a budget of $15,000, and features on its app.

“We saw inefficiency in the market, where you have all this talent, all this interest, but there is nothing bridging the two,” said Chief Operating Officer Ahmer Naqvi.

Another video features Nazar Gill, from the capital, Islamabad, who was one of the cleaning staff at an apartment building where Naqvi once lived.

One day, Gill knocked on Naqvi’s door and asked to sing a song he had written.

“I sang my song for him and he liked it,” recalled Gill, a member of the country’s tiny Christian minority that prides itself on its musical tradition.

Out of the Taliban's shadow
Tabeer’s sole female artist, Malala Gul, grew to love music as a child, by listening to an aunt who sang songs in the Pashto language spoken across Pakistan’s northwest.

Times were tough when she began singing five years ago, in a city roiled by Taliban-led violence.

“Conditions in Peshawar were very bad, but thank God the situation is much better now,” she said.

Gul stressed the importance of music, rebuffing those who call it unIslamic.

“This is a big world, and some people will say one thing, others will say another, but anyone who understands and values music will go very far.”

Khalti, a mobile wallet (digital) and payment service provider in Nepal, has launched QR-code based event ticketing facility on its... Read More...

Wobble smartphone app is ‘virtual breathalyser’, can tell if you’re too drunk to drive

Scientists have developed a ‘virtual breathalyser’ app – using smart devices to measure if someone is too drunk to drive. Read More...