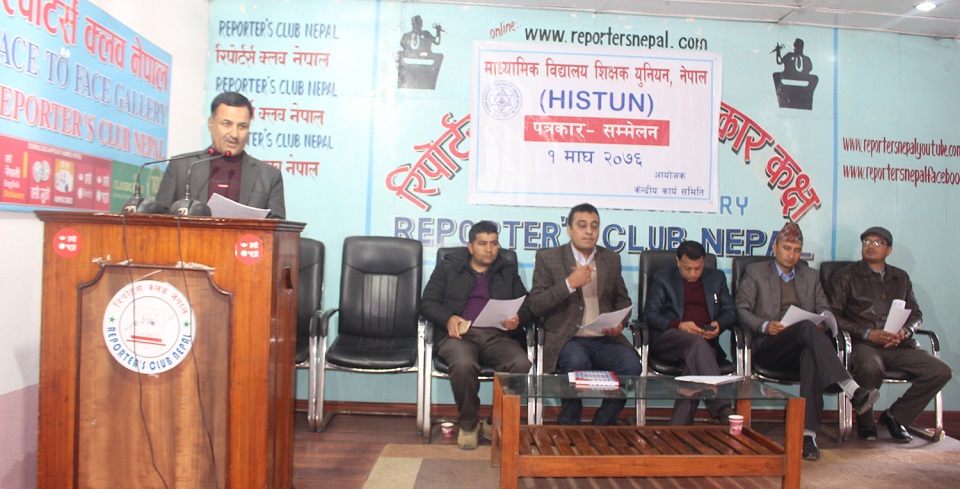 KATHMANDU, Jan 15: Higher Secondary Teachers Union Nepal (HISTUN) has urged the government to introduce new laws in such a way that the concerns of the teachers teaching formerly in the higher secondary level can be addressed.

Organizing a press conference in Kathmandu on Wednesday, HISTUN demanded the government to incorporate the teachers of secondary level (formerly higher secondary level which comprises classes 11 and 12) by amending the prevailing education act.

The HISTUN also demanded to allow the in-service temporary teachers of this level to compete in an internal examination for the second-class secondary level teacher.   Chairperson of the HISTUN Dipakraj Subedi informed that they also demanded remuneration and facilities as per the existing rules to those teachers who have either not applied or got selected in the vacancy announced for permanent selection in the higher secondary level.

Similarly, the union also urged the government to implement the recommendation made by Mahashram Sharma-led taskforce. According to the recommendation of the task force, a total of 7,805 positions should be created in the higher secondary level and in-service teachers should be appointed on a permanent basis as per their seniority.

"We also demand the government that teachers of higher secondary level should be placed in a senior position in the hierarchy of the teachers."

Likewise, they also sought to make necessary arrangements for the temporary appointment of those teachers who are currently working in technical schools.

"The teachers working at the same level in private and institutional schools should also be included in the Social Security Fund (SSF). At the same time, we also demand immediate implementation of the directive on teachers' services, facilities and conditions."

KATHMANDU, Dec 30: The United Democratic Madhesi Front has reiterated that the constitution amendment bill registered in the parliament could... Read More...

Three killed in a road accident in Solukhumbu
6 hours ago