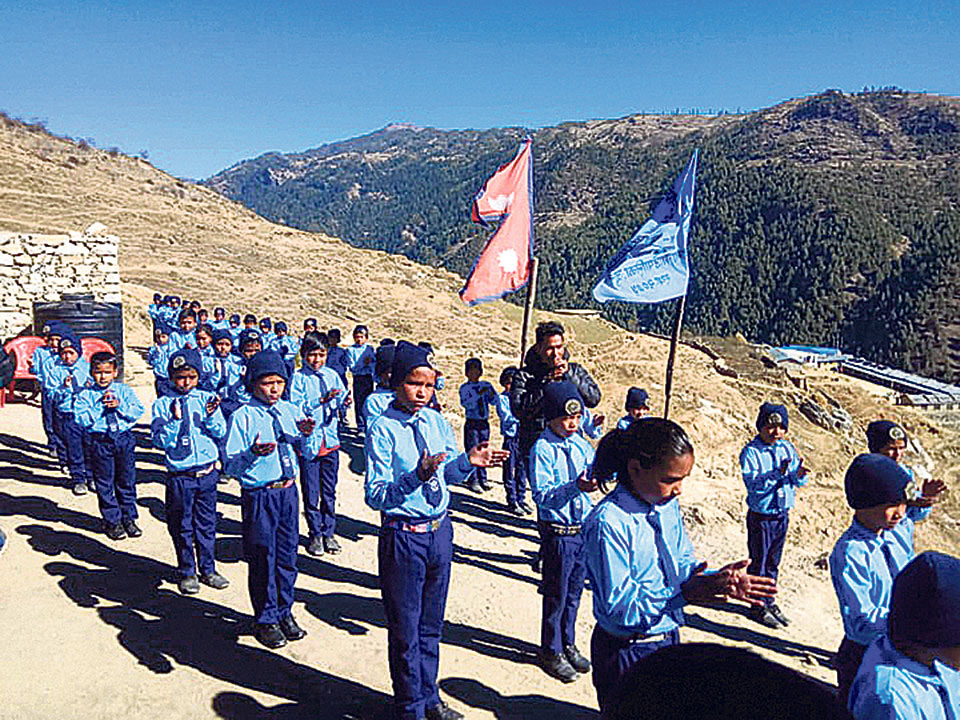 Students participate in the morning assembly at Hima Primary School in this recent photo. Photo: Republica

JUMLA, Dec 11: Hima Primary Boarding School established by Hima Rural Municipality two years ago in a bid to ensure education for all has proved to be a boon for helpless and orphan children in Jumla. The school is home to a total of 52 students so far in the two years of its establishment and authorities have a plan to expand the school's capacity. According to Raj Bahadur Shahi, chairperson of Hima Rural Municipality, it is important to enhance the school's capacity as there are many more poor and helpless children in the district who are in need of a residential school.

Bir Bahadur Bam of Patala Rural Municipality lost his father to some illness when he was a toddler. His mother could not send him to school due to poverty. Now he studies in the second grade at the residential school, and the family is grateful. "The teachers have become my guardian. I am very happy," the boy said.

Anish Kumar Shahi of Badki village of Hima Rural Municipality lost his mother when he was one year old. He had a miserable life. But he also got a chance to join the school last year and he says everything has changed for better.

"After losing my mother, I was neglected at home. They wouldn't give me enough food or provide me with clothes. I used to remain very sad," said Anish Kumar. "But in the school, everyone loves me. I feel it is my home," he added. He has a dream to become an army personnel in future and serve the country.

Ramita Adhikari, who lost her father during the decade-long Maoist conflict, also studies in the same school. A local of Patarkhola village of Hima Rural Municipality, she has also felt happier and secured in the new school. "I could not see my father. He died when I was still in my mother's womb. My mother did not have the capacity to send me to a school, but this school does not charge fees," she said. "We are even provided food and all other kinds of facilities at the hostel," she added.

Children from Tila, Sija, Kalikot, Khadachakra and Mahabai, among other places of the district have been enrolled in the school. According to the authorities, children are selected on the basis of their economic and family background. "We pick those kids first who are in need," said the rural municipality chair Shahi.

The residential facility and the schools are being run at old infrastructures of community health unit. Shahi stated that the rural municipality has already allocated a budget for its own school building. So far, four million rupees has been spent to ensure residential facilities, Shahi said.

KATHMANDU, Oct 7: A couple’s daughter died while their son is still missing when the motorcycle the four were traveling... Read More...

SURKHET, Oct 7: The local administration has issued a warning after the water level in the Bheri River crossed the... Read More...

RASUWA, Oct 7: An Israeli trekker, who got injured while trekking to Gosaikunda, has been rescued and airlifted to Kathmandu. Read More...