Highway prone to blockage due to ‘illegal’ sand mines 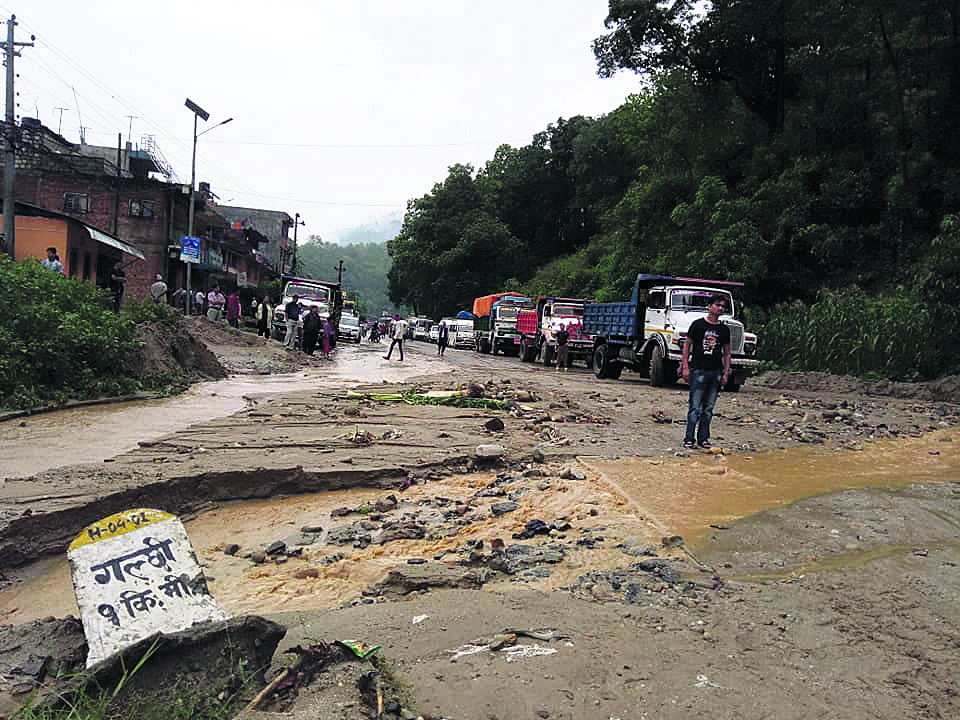 Vehicles stranded along the Prithvi Highway in Dhadhing due to obstruction caused by the debris of sand carried by the rain on Saturday. The main highway that links the capital with the rest of the country is in a sorry state due to the illegal operation of sand mines. Photo Courtesy: Bipin Malla Thakuri

DHADING, June 30: Thousands of passengers travel through the Prithivi Highway every day. The monsoon, however, has made their journey perilous, especially in Dhading area.

No sooner it starts raining the road gets blocked by the debris falling from sand mines above leaving the passengers stranded. Passengers find themselves helpless in the middle of the road during hours-long roadblock.

In the last few days, the road has been blocked regularly. On Saturday, it remained blocked for around seven hours. Interestingly, the authority did not have to go through hassles to find workers to clear the road however. Since it was not other kind of debris but heaps of sand, workers were deployed by the factories themselves. The factories based in Baireni were competing to collect the maximum amount of sand.

“Had it been mud, they would not even look back. But it was sand, and the businessmen could not let go of the opportunity as sand gives them money,” said Naresh Khatiwada, a local of Baireni. “They were in a fierce competition to collect sand. They brought excavators themselves.”
When it rains, sand gets collected at the highway from an uphill market of Baireni. And businessmen these days remain very alert about this, the locals said.

There are around 10 such sand mines around the marketplace of Baireni and those are not registered.

“They do not pay any tax to the government. They are here only to make profit and the authority is not bothered. But this has been troubling us, troubling passengers every day complained,” Bipin Malla Thakuri of Baireni .

According to Thakuri, the highway blues is not a new thing however. The lack of water passage in the road causes trouble during every monsoon. “Even though they spent millions of rupees in the name of repairing the road, the road continues to be in pathetic condition,” Thakuri said.

The locals have also alleged that the chairperson of Galchhi Rural Municipality himself is ‘involved in blocking the road’, instead of solving the matter.

“KB Construction company belongs to the chairperson Krishna Hari Shrestha. The one of the sand mines from where the sand blocks the road during the monsoon belongs to him,” a local said requesting anonymity. “When the authorities themselves are doing illegal works, who will fix it?”

Meanwhile, Traffic Police Chief at Gajuri, Hemraj Ghimire, lamented that hundreds of people get standard on the road everyday and the police do not have enough resources to rescue and comfort them.

“Many people are seen in need of immediate help, but for that we are not that well equipped. We have to work in very tough conditions,” he said.

RAJBIRAJ, Sept 3: The daily life of the 600 households affected by flood water from the Saptakoshi river in Hanumannagar... Read More...

Sarangkot: A place for thrill in monsoon

KATHMANDU, Oct 17: Meteorological Forecasting Division (MFD) has officially announced the end of this year's monsoon in Nepal which had entered... Read More...