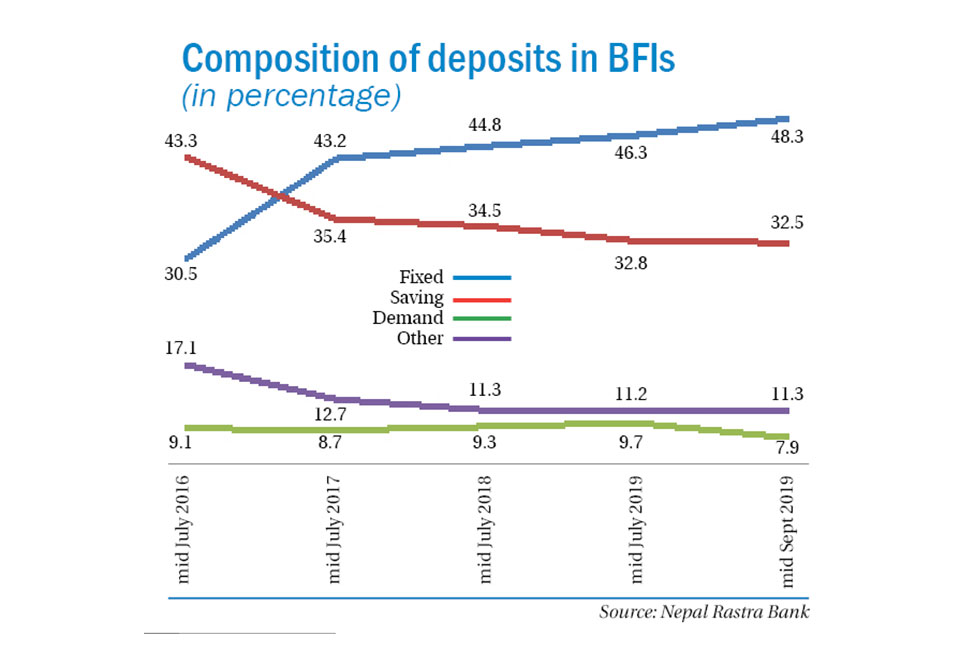 KATHMANDU, Oct 31: The shortage of lendable fund in bank and financial institutions (BFIs) and their competition to get hold of longer-term money has altered the composition of deposits in the banking system.

According to the data of Nepal Rastra Bank (NRB), the share of fixed-term deposit in BFIs rose to 48.5 percent of the total deposit in the second month (mid-September) of the current Fiscal Year 2019/20 compared to 30.5 percent in mid-July 2016.

According to the data, the share of demand deposit stands at 7.9 percent and 11.3 percent of ‘Other’ type of deposits as of mid-September this year.

Bankers attribute this reverse in the composition to a sharp rise in the interest rates of the fixed-term deposits in recent years.

The high interest rates in fixed deposits owing to the shortage of lendable funds in the BFIs not only lured new depositors who were looking for less risky investment avenues but also prompted the existing depositors from shifting their deposits from saving to the fixed-term accounts.

Depositors have become interest rates-sensitive in recent years due to widening of the difference of rates between saving and fixed-terms deposits, according to bankers.

“Earlier, savers were not concerned where there money was as there was not much difference in the interest rates between saving and fixed-term. However, BFIs started to raise the interest rates and the gap with the saving rates widened. This tempted depositors to shift their deposits from saving to fixed-term deposits due to higher return,” added Gyawali, who is also the CEO of Jyoti Bikas Bank Ltd.

The interest rates on fixed-term deposit climbed up to 13 percent while the saving rates went up to 8 percent. However, the Nepal Bankers’ Association (NBA) -- the umbrella organization of chief executives of 28 commercial banks -- decided to impose a cap on the deposit rates to prevent it from going upward spiral.

Currently, the rate of fixed-term deposit for commercial banks has been capped at 9.25 percent while they cannot offer more than 6.5 percent on saving deposits.

While the increase in the return in the fixed-term deposit rates rewards depositors, it’s a bane for BFIs and borrowers.

“Depositors may celebrate the higher return in fixed deposits. However, the cost of funds for BFIs will increase as it means higher interest expenses for a longer term. When the cost of funds increases, they will raise their interest rates on loans which will adversely impact borrowers,” added Gyawali.

KATHMANDU, July 15: The average base interest rate of the bank and financial institutions (BFIs) has gone down to the lowest... Read More...

ILAM, July 12: Ethnicity-based fringe parties, which have their stronghold in the eastern hill districts, have lost their election deposits in... Read More...