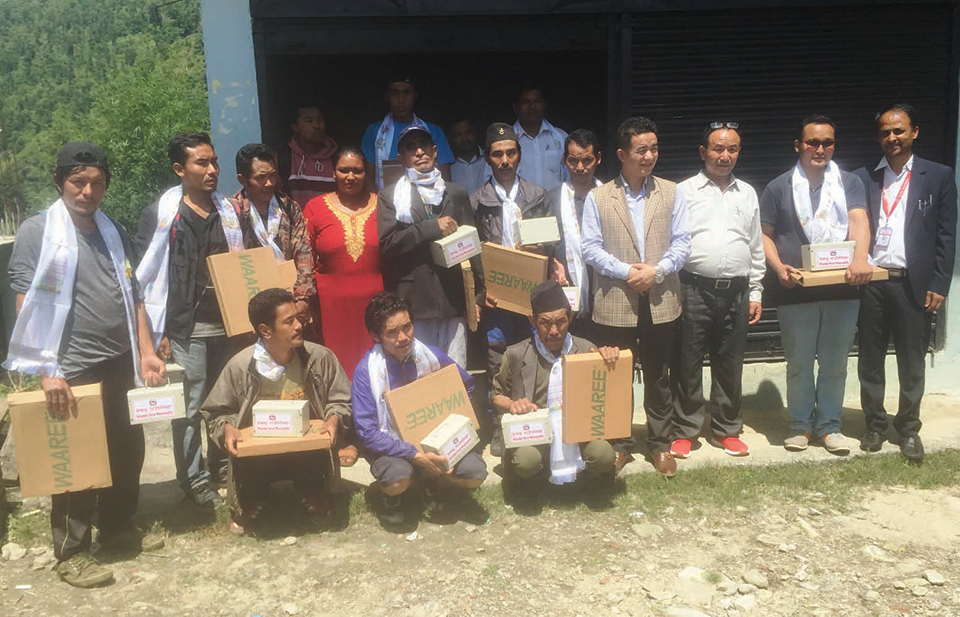 A group of herders who received solar panel kits from Helambu Rural Municipality pose for a group photo in this recent picture. Photo: Dhruba Dangal/Republica

SINDHUPALCHOWK, Aug 29: Pemba Sherpa of Helambu village takes care of his yaks and other cattle ‘just like his kids’. Though it takes hours to clean the sheds, he does that passionately every day.

He says the yaks and cattle have always provided for his livelihood. But there is something that has always bothered him. He would feel so sorry if they fell sick during nights.

He would feel lost in the dark sheds and would be unable to help them the way he desired. Torch lights or lamps wouldn’t be of much help in such a scenario.

“At nights, it used to be very difficult for us to take care of our cattle in their sheds.  It would be excruciating, especially if any of the cattle was feeling unwell and required extra care,” Sherpa said.

The village is still not connected with the electricity grid. However, certain things are changing now.  One of them is solar-powered lights.

Not for residents but for the cattle. He has been provided with solar panels and battery to lighten his cattle shed.

“I am more than happy. It’s a dream come true,” said an elated Sherpa. He is one of the lucky yak herders in the village to receive the system for solar light.

He feels that the installation of the lights in the shed has been a great relief for his 25 cows and 10 yaks.

“On a normal night, it isn’t a problem if you don’t have lights in the shed. But as a farmer, I tell you that things go wrong now and then. You never when a cattle falls sick in the midst of the night,” he narrated.

“And if you are not able to take care of them properly at the time, you feel terrible about it.”

Intending to promote yak herders in the high hills, Helambu Rural Municipality recently provided solar panels and battery to the herders to light their sheds.

The rural municipality selected beneficiaries on the basis of the altitude of the locations of their sheds and the number of cattle they have.

“We have provided the panels under ‘Ujaylo Abhiyan’ program. The program aims to benefit our herders in the high hills,” he said.

He also stressed on the need to give continuity to the traditional occupation of the locals. And noted that the rural municipality would be bringing further programs in the future, he said.

Herders in the hills had demanded power sources for their yak sheds. Even during the local level election, demand for electricity topped voters’ agenda.

Political parties had assured the locals to avail all necessary facilities once they come to power. However, several rural villages in the district, including Helambu, are still deprived of roads, hospitals, school, and electricity.

“We have many other problems too. Hopefully, they will be addressed too. But the decision of the rural municipality to support us with solar light is indeed a great relief for us,” said a local Aiti Lama.

She recently lost a buffalo to some disease, and because the rural municipality had insured it, she received Rs 72,000 as compensation. “I had bought that buffalo for Rs 80,000 four months ago, but some disease claimed it. I did not know that insurance would cover its cost. But it did,” she was happy to share it.

Regarding the distribution of the solar panels, Lama is not sad though she demands that for all farmers. “We all are facing problem in lack of light. We cannot buy such a facility on our own. We would be grateful if the government helped us too,” she said.

Yak farming was quite common in Helambu in the past. As tourism started booming in the village, few took an interest in carrying on with the job.

“We still have herders who are into yak farming. We need to encourage them. Or else, in the years to come, their numbers will drop to zero,” noted Bhim Prasad Koirala, Chief Administrator officer at the rural municipality.

The rural municipality has plans to initiate mass breeding of the yaks. Similarly, it has also announced grants for farmers, Koirala stated.

KATHMANDU, August 1: A fresh flood has occurred in the Melamchi River yet again. Following incessant rain on Saturday, the... Read More...