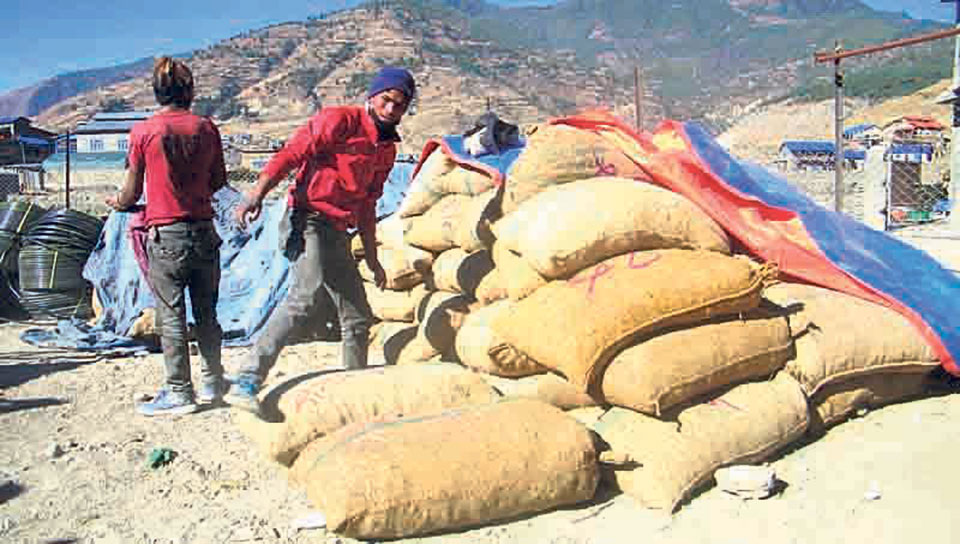 Fortune of farmers change after they switch to herb farming

JUMLA, Oct 6: Santakali Rokaya knew one thing very well about her birthplace since her childhood – life in Jumla is quite unforgiving. She grew up with the mindset that being born in this remote land means a life-long struggle for survival.

Now when she is married and has a few kids, Jumla is not the same though. The local of Chandannath Municipality -1 has discovered means to earn money. She sees bright prospects in selling herbs.

“In the past, I used to feel extremely worried about our ‘cursed’ fate. I thought Jumla and its people would always remain poor,” she said. “But our stars have changed. Now, we are living a life that we would not have imagined until a few years ago,” she added.

Rokaya used to work in the fields even in the past. However, no matter how much efforts she put, the crops would not suffice even for a few months.

“I still have a vivid memory of queuing up in the market to get just a few kilos of rice. Other necessities were equally scarce,” she reminisced.

After the peace process begun, development made its way to the remote place. Then came road access to the place which had long remained untouched by the road link.

Mules were gradually replaced by trucks and tractors for transportation. “We could bring vegetables and crops to the market to sell. That enhanced opportunities for villagers. The road has done wonders for us,” she noted.

Though people of Jumla were beginning to understand the importance of commercializing their apples, potatoes, pulse, beans and other items, they were not making a very great profit. The production cost was huge. “It is not easy to grow vegetables and keep them fresh until sold off. The same is with other crops. We have to give a lot of time and invest money to make crops ready to sell,” shared Rokaya.

Meanwhile, people of Jumla came to know through several channels that Jumla is very rich in herbs, which fetch very good prices in the market. Rokaya, who was looking for a way to enhance her income thought to give it a try. Soon, she was collecting pretty good amount of herbs from her fields.

“We call it wild herbs because it grows mostly in the jungle and in places resembling a jungle,” she explained.

Rokaya started cultivating herbs six years ago. And by now, she is not just a farmer, but also its promoter and marketing manager. And she quite loves her job.

“I am farming herbs in one hectare of land now and thinking of expanding it,” she said.

What Rokaya loves about herb farming is the low cost of investment and less challenges. It needs care, but not as much as other productions need. It is less vulnerable to pests.

“This is a land of herbs. They easily grow here. Instead, we were trying to produce other things,” Rokaya said. “I feel that we must focus on nothing but growing herbs. Jumla will prosper in a very short time,” she added.

Daily expenses, children’s school fees and a little extravagance are not a big deal for Rokaya anymore. With her efforts fetching very good rewards, the family is happy. “I have ordered for herb processing machine lately. Everything is going on pretty well,” she said. She, however, added that the herbs of Jumla have not yet found a good market. There has not been adequate promotion, she noted.

Also according to Purneshwar Devkota of the same municipality, there are varieties of herbs in Jumla and more could be explored. And those could be promoted and exported.

“We have to grow, conserve, and promote our products. Jumla is very rich in herbs. If only we could give due attention to this prospect, this land would prosper to leaps and bounds in a few years,” Devkota remarked. “We get priceless herbs in all of the seven rural municipalities of this district,” he added.

He lamented about the government’s negligence regarding this issue. If only the government had realized the value of herbs and made an approach to make the most from it, millions of rupees could have been earned, he opined. According to Rabi Devkota, an officer at ‘Karnali Herbs Procession Center’, there is a need to simplify the process of collecting and marketing the products.

“Farmers are switching to herb farming. There is a need to make it more effective. The collection of those herbs, transportation to market, everything has to be simplified,” he said. “In the case of animals and herbs on the verge of extinction, there are international treaties Nepal is signatory to. We need to educate people about that too. Our policies and strategies should be smart. We should promote success stories of our farmers,” he added.

The common markets of the herbs from Karnali are China and India. Farmers insist on the need of processing machines and other facilities and better marketing of the herbs.

Jumla, Jan 27: The police have taken control of unauthorized herbs without a collection permit which were  being  transported  in... Read More...