‘Hello Sarkar’! May I help you? 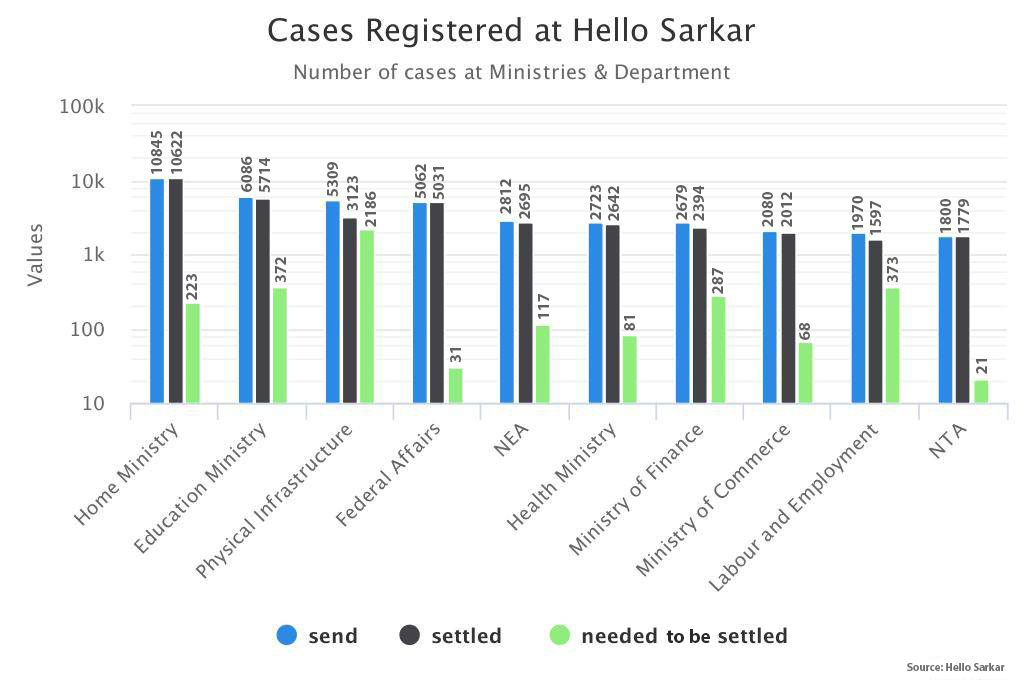 With the capacity of Home Minister, Sharma is formulating new plans and policies to ensure the proper security in the country. However, it has been found that the highest numbers of complaints registered in ‘Hello Sarkar’ are related with the Home Ministry. Till date, 10 thousand eight hundred 45 complaints related with Home Ministry have been registered in ‘Hello Sarkar’. (Mentioned in the graph)

How does ‘Hello Sarkar’ function?

Singha Durbar is social network prohibited area. However, the 16-member team of ‘Hello Sarkar’ has authority to access the different social networks like facebook, twitter among others. They are assigned to address and to carry over the complaints from the public to related departments and offices.

The staffs under the leadership of Under-Secretary Pradhyumna Upadhyaya work in two shifts. Six-members team work from 7 am till 2 pm and the next team works from 2 pm till 9 pm. They keep themselves busy in registering the complaints through various medium including toll-free, social networks, emails and fax of ‘Hello Sarkar’ and forward the complaints to related departments and offices.

“We forward the complaints of the public to the related departments and offices through 42 ministries and address the complaints through the stakeholders”, said section officer Hari Bhakta Mahatar of ‘Hello Sarkar’.

Till now, the department has forwarded 62 thousand two hundred 21 complaints to 42 ministries among which 55 thousand nine hundred three complaints have already been addressed. The rest numbers of complaints are in process to be solved.

Other complaints related to Ministries of Education, Physical Infrastructure and Transportation, Federal Affairs and Local Development, Nepal Electricity Authority and Ministry of Health are registered in ‘Hello Sarkar’ after Home Ministry. Most of the complaints related to Home Ministry, Education, Federal Affairs and Local Development and Nepal Electricity Authority have been addressed.

‘Hello Sarkar’ has provided toll-free number 1111 to register the complaints.

Earlier, ‘Hello Sarkar’ used to register the complaints through social networks facebook and twitter. Later, following the direction from the government to open the twitter account of different ministries, now the directions are given through the twitter accounts of related ministries. Baburam Bhattarai-led government started to register the complaints of public through ‘Hello Sarkar’ in 2011.

“Initially, we used to note down and address around 90 complaints within seven hours a day following the direction from the then Prime Minister. Following the changes in the government, we are working under the guidance of the Under-Secretary’, he said.

To address affectively, ‘Hello Sarkar’ segregates the complaints on priority basis. Depending upon the nature, the complaints are divided into three categories; the complaints that should be solved within 24 hours in high priority, within three days in priority and within a week in general category.

Recently, ‘Hello Sarkar’ is addressing around 40 complaints of high priority in one month. “We are trying to solve the problem referring to the current laws and acts. However, investigation should be done to ratify the accusation, for which, we are facing some hurdles”, said Mahatar and added,” Staffs should be well-trained to make acquaintance with the social networks and mobilization of the staffs from authority level should be transparent. Implementation part is very weak.”

The staffs of the ‘Hello Sarkar’ accept that they respond the repeated types of complaints very lightly. “We take the opportunity to address the repeated complaints very lightly and we respond it in entertaining way. But we do not try to make any wrong effect to the public”, said Mahatar. He added that the team is well aware of the consequences of such responses in the social network.

Generally, the problems of traffic jam, pollution, water supply, pothole, medicines are among the complaints that are registered in ‘Hello Sarkar’ through facebook, twitter, SMS, email, fax, courier, post or person himself.

‘Hello Sarkar’ has been established as the platform to enlist the complaints against reluctant nature of bureaucracy and bureaucrats.

NEA earns profits of Rs 8.50 billion in Q1, leakage reduction and energy export are the main contributing factors
6 minutes ago